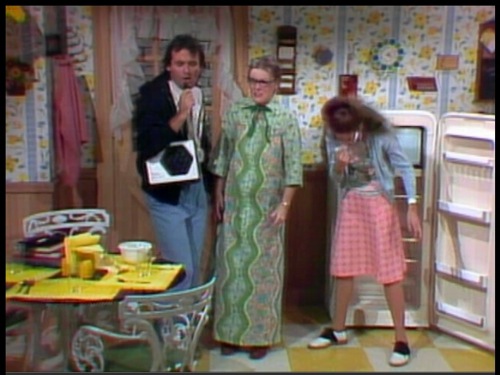 Todd: [pretending to read] “Dear Comrade ‘Four-Eyes’ Loopner, Yours was the stupidest letter I’ve ever received in my life. And if you really want to learn about chess, you should probably ask the future president of the Walter Shore High School Chess Club, the always incredible, great Todd DiLaMuca!”

Lisa: That’s so funny, I forgot to laugh!

Lisa: [takes note back] Come here, mom, this is what it really says. [reads] “Dear Miss Loopner: Congratulations! King’s knight to Queen’s pawn four was an ingenious move. You should have no trouble becoming president of your high-school chess club with that head on your shoulders. Sincerely, Boris Spassky.”

Todd: You want to say it instead of spraying it, young lady? No way, anyway, not with my new campaign song. [presses button on boombox he’s wearing, which plays Grease theme music; sings, into mic] “Chess is the word, it’s the word that you heard/Chess has moves, chess has meaning.” [Lisa and her mom dance] “Oh, chess is the time, it’s the place, it’s the motion…” [turns music off]