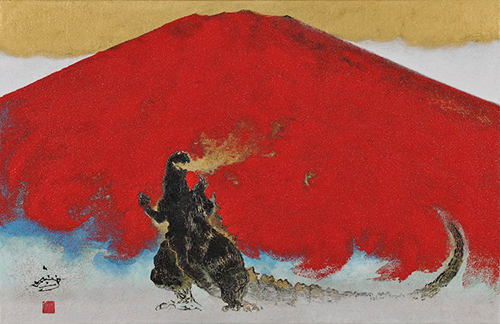 Luckily for us, however, there are those that would. Eye Candy dwells on the delicious pictures painted by Yūji Murakami, and his subject, the Bright Impossibility.

Yūji Murakami, the younger brother of Takashi Murakami (whose playful grotesques have dazzled in venues from Versailles to the MFA to Uniqlo), specializes in Nihonga, a system of traditional painting techniques for Japanese art, but updates the canon by featuring contemporary scenes and characters. Recently he has turned to Godzilla for inspiration, who was impossibly sparked to life (according to one legend) by the nuclear explosions over Hiroshima and Nagasaki. 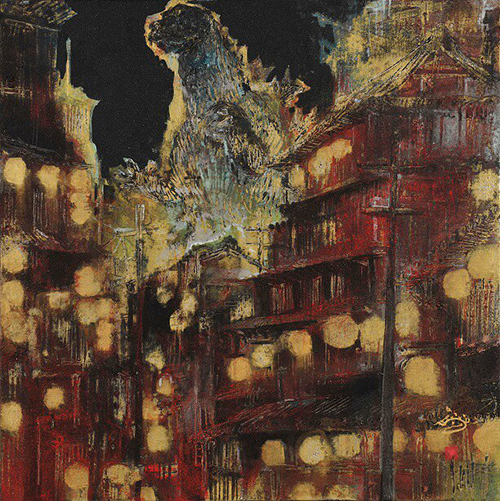 Godzilla is a kaiju, defined (in part) as a fictional monster; more specifically he emerged not even an entity per se, but as a type of special effect in films (tokusatsu), with progenitors in Kabuki theater and puppetry. Classic Godzillas were brought to life by claymation and after-school Creature Double Features, newer ones by CGI and streaming.

Murakami’s gold leaf and drybrush Godzillas suggest the essential ambiguities of the creature’s existence, with its multiple origin stories, terrifying power, and a moral compass that is beyond good and evil. The blurred edges remind us that you can never quite trust what you see, while the gold leaf evokes the bright impossibility of a mushroom cloud — perhaps as reflected in wet scales and nictating membranes. 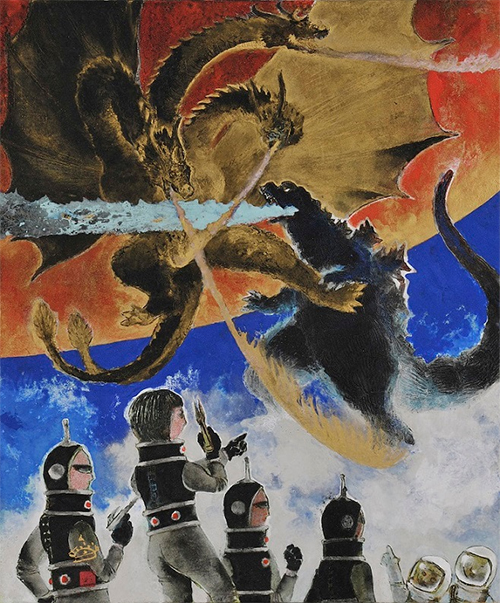 “Godzilla is an enormous, destructive, prehistoric sea monster awakened and empowered by nuclear radiation. With the nuclear bombings of Hiroshima and Nagasaki and the Lucky Dragon 5 incident still fresh in the Japanese consciousness, Godzilla was conceived as a metaphor for nuclear weapons. Others have suggested that Godzilla is a metaphor for the United States, a giant beast woken from its slumber which then takes terrible vengeance on Japan. As the film series expanded, some stories took on less serious undertones, portraying Godzilla as an antihero, or a lesser threat who defends humanity. Later films address themes including Japan’s forgetfulness over its imperial past, natural disasters and the human condition.”
— wikipedia

But whether a nuclear by-product, a Jurassic persistence, an imperial (or anti-imperial) statement, or a metaphor of particularly flexible narrative deployment, Godzilla is by now a Mainstay Monster like King Kong, Frankenstein, and Spiderman, with a worldwide brand, multiple spinoffs, and cross-universe adventures. Murakami’s evocative treatment both recalls Godzilla to his Japanese heritage, and breaks through the plastic ceiling of pop culture into, Eye Candy would insist, a higher atmospheric plane, where the terrible lizard surely now reigns as the king of golden beasts. 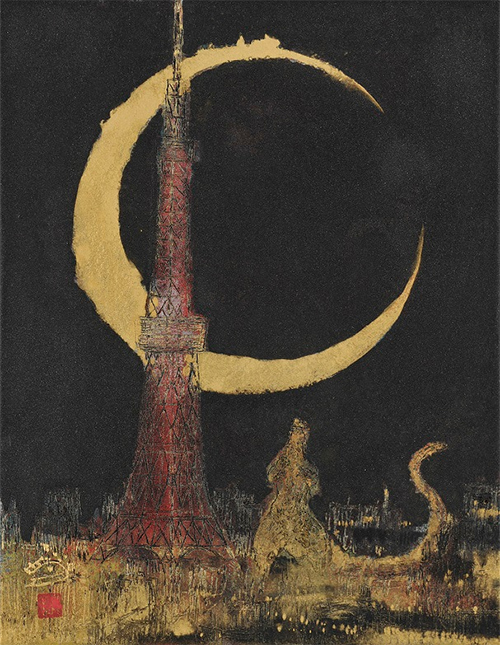 Gaze upon Murakami’s Majestic Sea Elemental and see the god in the beast.