Off-Topic brings you over-the-transom, on-tangent essays, dialogues and subjective scholarship on an occasional, impulsive basis. This time, a quarantine-era look back at the recent fake past of the streaming unconscious… 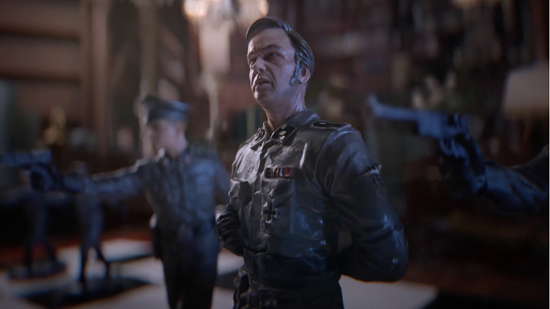 Assimilation is the dubious gift of invisibility. It can only be granted by whoever’s more powerful than you are, and it’s a bargain you should really double-check the receipt for. Because once the outline is emptied, it can be filled in with whatever the people ignoring your real self may prefer. I grew up with a keen sense of the pleasant invisibility of my Jewishness, and Amazon’s series Hunters is the strongest sign yet that the bill has come due.

Only a people that most others don’t fully grasp the existence of could be open to the kind of cultural shorthand and simplistic symbolism that pervade this show. Jewish Americans, like the Irish and Italians before them, have blended in so thoroughly that their distinct contours have to be reconstructed, and Hunters is the kind of entertainment where the process doesn’t go beyond a sketch.

Stereotype is the classic shortcut (and substitute) to understanding; and while the show has been widely pilloried for its lurid exploitation-movie treatment of Nazi terror, its utilization of millions of deaths as a plot-driving device, what’s most striking is the cartoonishness of its Jewish protagonists. The relationship of the Jewish teenager and his grandma is Jazz Singer-level bathos; Al Pacino’s scrappy patriarch is sheer Yiddish vaudeville. These sentimental caricatures are the kind of backhanded compliment that doesn’t inspire much thankfulness in its subjects. But the end that we’re to understand justifies these means is the show’s succession of elaborately murdered and mutilated Nazis. There can be nothing bad about that, right?

It depends on who’s benefitting. Depicting historical atrocities with weird relish to set up brutal revenge by cardboard heroes whose real-life counterparts’ suffering is incidental to the payoff is the very definition of exploitation. A sympathetic stereotype is still just that, and does its object no favors; be it the tragic, tubercular Asian prostitute or the dashing, haunted Latin badass or the pitiable, “inspiring” Magical Negro. In Hunters, much is made of the need for Jews to reclaim their self-respect and fight back, which assumes their victimhood to begin with. What’s weird is that the series’ 1970s era was a golden age of tough-guy Jewry; this was the time of Israeli secret agents crossing the globe to gun down terrorists, of proto-Rahm Emanuel types packing off to Israel to join in on its territorial wars.

But that, of course, is one of many ways in which a show replete with surface nostalgia for the locales and playlists of its time-period blares a basic lack of knowledge about its actual events. Some critics have protested that the real-life survivors of the Holocaust wanted not vengeance but justice; this can sound overly lofty, but an insistence on making democratic systems of proof, prosecution and penalty actually work was an underlying passion of the cause. But loftiness aside, justice was done, all the time — Nazi-hunters were pop-culture heroes during the real ’70s, and they got quite a few of their quarry locked up. They did it through exposure, not execution, and often with the vigorous cooperation of the same U.S. government that had earlier let these criminals in and laundered their history — though admittedly, this was also in an era where facts mattered once they were presented, even though the powers-that-be would first try everything they could to keep the facts suppressed. It’s not hard to see how the Trump-era audience of Hunters might not grasp the concept of investigative heroes (’70s thrillers from the fact-based All the Presidents’ Men to the fanciful Three Days of the Condor used to involve “going to the press”; in the 2020s we shoot first, last and always).

Trivializing a genocide as fodder for popcorn catharsis is the main matter that has preoccupied TV critics and Jewish organizations who don’t like the show; this has led their debate with its producers to be an intellectual exercise over the rights of artistic license and “representational truth” more than the bare specifics of chronological accuracy or the rudiments of historical literacy. Checking the customer reviews on Amazon is a depressing parade of private pundits apparently complaining that the show is not insensitive enough (objecting to its diverse cast; insisting that the Hunters should be going after Muslims instead; lamenting why “there always needs to be a gay relationship in shows today”; etc.). Many of these commenters hold forth on what does and doesn’t truly “honor” and realistically threaten Jews, all in the third person and none from writers who seem to be Jewish themselves. For the majority of American Jews like me, who in the Charlottesville era find ourselves genuinely endangered for the first time in our lives but who also have access to the safety of whiteness, to be argued over in a discussion we’re not present for is an instructive experience. It’s beneficial to be reminded of the ways in which, as any member of the idealized and marginalized Native American or patronized and passed-over Asian American communities knows, you don’t have to be gone to be erased. But Hunters is mostly a lesson in how much people all across America haven’t learned.