Not another art restoration!

Today Eye Candy has its eyes full gazing upon the restored panels of the Ghent Altarpiece. For those of you not saturated in art history, the Ghent Altarpiece, the 15th-century series of folding panels by Netherland masters Hubert and Jan van Eyck, was one of the silent stars of The Monuments Men, drafting A-listers like George Clooney and Matt Damon into the army to rescue cultural treasures from the Nazis. Painted front and back, each Altarpiece panel displays God, angels, saints, biologically-identifiable flora and fauna and, well, some of the rest of us, in the best medieval edutainment on offer. 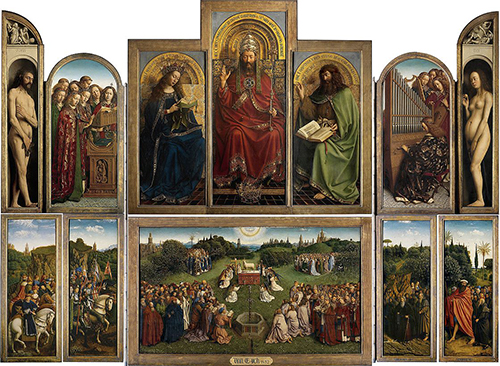 Today we’d perhaps classify it as an infographic, if legacy critics hadn’t already preempted that by calling it a masterpiece.

Other legacy effects have not been so propitious, however, including a 16th-century restoration in which, in addition to cleaning up some sooty surfaces roughened and dulled by time, artists whose names have not come down to us dove into the cosmic/aesthetic backlog to update a few things.

One thing they updated was the figure in the large central panel of the Lamb of God, represented by (symbolism alert) a lamb. In the interests of increasing verisimilitude, the later artists overpainted the Lamb to look more like an actual animal. And who can blame them? After all, this is what the medievals thought dolphins looked like. And once the initial influencer drew an animal, following scribes just copied what was popular, setting it in inked or silvered or marbled taxonomy for centuries.

The early restorers may have wondered about the Lamb, as sheep were not exactly uncommon in the Europe of the day (or of any day really, since the agricultural revolution in the dawn of written history), but whatevs, they may have thought. Fixed it for you.

Well there was someone who did indeed blame them, and now we can see Him anew. 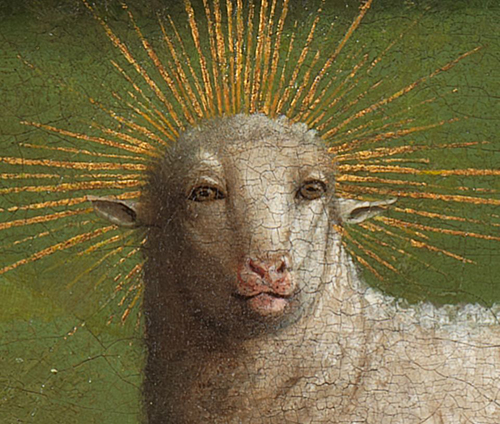 Reaction on Twitter was one of horrified — acceptance…? The old one (actually the new one) looked like a sheep. The new one (actually the old one), has human eyes and lips. All the better to see you with. When you first see it you may hate it. Yet you cannot look away. After all it is fixing you with its weird gaze! And then you may find that your perception flips, and you may have adjusted to the new reality, like the “upside-down glasses” experiment. You may find that maybe … you love it. You must love it. You do love it.

In a Black Mirror inversion of the “restoration” famously meme’d in the Sanctuary of Mercy church in Borja, Spain (and reviewed by HiLobrow in 2012), the Ghent restoration is also unnerving. But with the Altarpiece, rather than being disturbed by the fix, we’re disturbed by the original. Perhaps it is not so much Black Mirror here then, as cleaned window. Cleaned window into your probably damned soul…

Is it coincidence that the van Eycks’ original bears an uncanny resemblance to the AI-emergent art attempts known as “deep dream“?