When I decided at the eleventh hour (the day before it started) to do this year’s Inktober challenge along with a group of my high school students, I wanted to approach it with a sense of play and exploration. I thought of ways that I might bridge each one-word prompt with another source of text to deepen my interest and connection with the month-long project. For “ring,” the first prompt, I immediately thought of “Ring of Fire” by Johnny Cash. And that was it! — the criteria for my own spin on the challenge became connecting bits of lyrics from some of my favorite musicians (though not necessarily my favorite songs by them).

For each 3″ x 4″ drawing, I used the daily Inktober prompt to search for lyrics that included the word. From there, I would find a song by a musician or band that I love. Oftentimes, while searching lyrics on my phone, I would make a delighted gasp when I made a connection between the prompt and the song. Shabazz Palaces, Stereolab, Julie London, Elvis Costello….! And then that often conjured memories of the song or musician — how I was introduced to them, a concert I saw, the evolution and expansion of the music I enjoy. They are each tiny tributes to my intertwined love for visual art, words, music. — Heather Kasunick 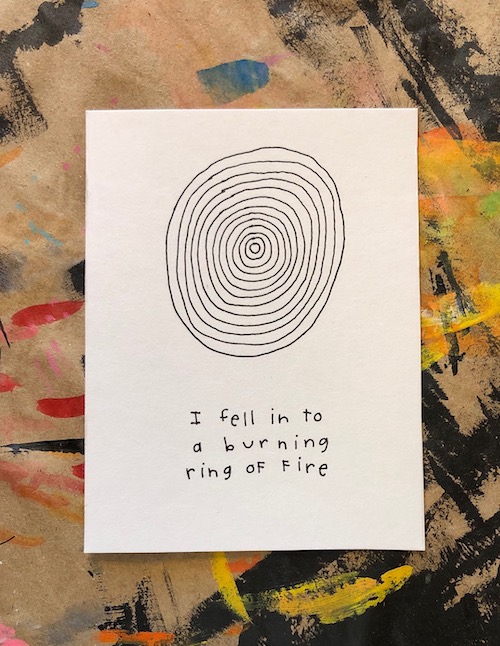