The American dream lingers in sleepy towns, the mountain and backwoods Shangri-La’s that outsiders idealize but which even the “left behind” can be dying to get out of. We all know what happened to the woman who tried to leave that fictional paradise — immediate removal from its protections, aging decades in a day — but this is women’s penalty for looking beyond their boundaries, as far back as Eve. It’s a myth we don’t have to believe, but rewriting your own future isn’t easy for anyone. 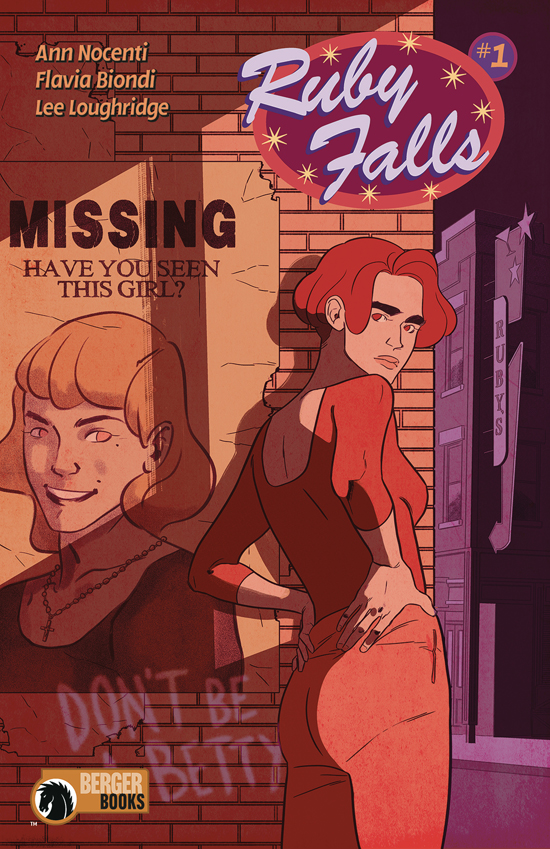 In Annie Nocenti’s Ruby Falls (first issue out tomorrow from Dark Horse Comics/Berger Books), the dream has fallen short of the mountaintop, and blood runs downhill. The old shops are being hollowed out like the iron mines that used to sustain the town, and a restless young woman struggles to make missing pieces add up. Lana is trying to trace the fraying thread of her own family history, intrigued by a traumatic memory her intermittently demented grandma Clara reveals about a possible murder in the bar now run by Greta — Clara’s daughter and Lana’s mom — when Clara was a child and the bar was a speakeasy (the term has never been more ironic than for this tight-lipped family).

Ties that unravel are everywhere around us — the silks that Lana’s girlfriend Blair hangs from at her nightjob in a “gentlemen’s” club; the clotheslines that span the alley between Lana’s divorced parents’ places of business (Greta’s saloon and father Blake’s butcher-shop) like sutures coming loose; the tightrope-walk of cats along the clotheslines, which cause personal artifacts to detach and drift to the ground like the autumn leaves that spiral in almost every panel. Lana is trying to excavate a memory, extract some truth, like the miners who once made lives there; however, we can’t tell what if anything Lana’s search can make whole. 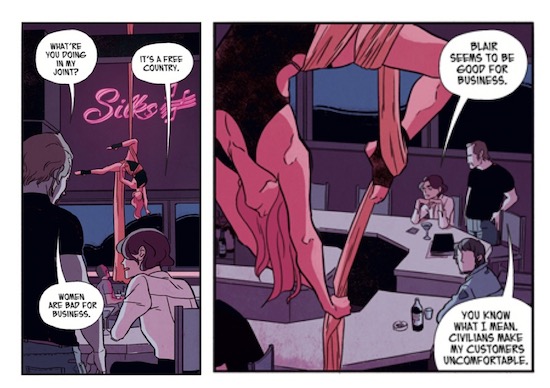 She races time backwards, delving into many sources that are dematerializing as she seeks — the print newspapers that local librarian Raymond digs out for her; her grandma’s fading and unreliable memory. Clara immerses herself in vintage crime fiction, so it’s hard to tell (and she shifts her claims) about what events come from her life story and which come from mystery plots. But she does lapse into calling her own granddaughter “Betty,” the name of the woman who was killed. Also rebellious and self-possessed like Lana in an era when that put women in even greater danger, this unknown phantom seems in some ways more like Lana’s forbear than either her mom or grandma.

Like a seam of ore, a system of veins, the pattern Lana is navigating is right in front of her, and just as hidden. Red punctuates the landscape, from Lana’s hair to the rubies among gems Clara collects, to the blood on Blake’s apron and the red meat in a violent flashback scene, to the legendary red torrent of the iron-tinged waterfalls leading out from the former mountain mines. Literally fallen women, from Betty in the speakeasy to Lana on a safety-net when she tries out trapeze with Blair, are a recurring image in identical position; a chalk outline that any woman could be written into. Do such clues present an exit or just prove that all our story-points are already in place? 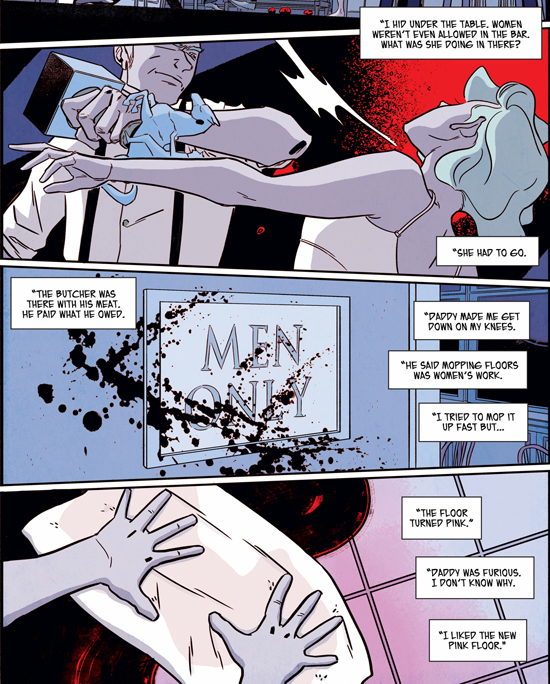 Filing the blanks — in emotional spaces, in her elders’ memories or honesty — will be Lana’s purpose. The classic noir slat-pattern, from blinds, from high fences, paints many scenes in light and dark, lining through what can be seen and narrowing clarity like the sliding eyehole on an old speakeasy front door. The marquee of a closed movie house drops letters like an unsolvable puzzle, a ransom-note for some abandoned captive.

Nocenti is at the summit of her powers, and artist Flavia Biondi lends a luminous, elegant eye and balletic storytelling instinct to this vibrant psychological ghost story. In one remarkable sequence, Clara’s memories gather like a stormfront before she realizes it herself, strewn dollars starting to flutter from her nursing-home ceiling like the leaves in other settings, a puddle of blood seeping toward her feet, until she has descended fully from an everyday conversation with Lana into the crime-scene her buried inner child keeps replaying; if we look closely we see that even the leaves of trees printed on her room’s wallpaper shrivel and drop as this memory gathers, snapping back to normalcy when she’s jolted back into the present — we saw it, but we have no more idea than she or Lana has of what was real. Colorist Lee Loughridge, always one of the best in the medium, has never been better. His pastel gels of amber and violet are veils of perception that can maybe tint our vision but not hide anything, and his palette of southwestern warmth and century-old shadows spills out to surround us; it’s sunset in America, but we live to see the tale. Richard Bruning’s book design is perfect, from the Route 66-roadstop logo to the pastoral endpapers, like a tourist guidebook to a place that can’t exist.

Under the surface is a dangerous place for women in the world’s lore as well. Persephone was stolen from the sunlight because the subterranean god of buried bodies and precious gems put a claim on her; Eurydice was pulled back to the caverns of the dead for being looked at by the man she loved. Will Lana’s “descent” be a gift of her ancestors or a downward drop with no return? She has to know, so we will too.