Off-Topic brings you over-the-transom, on-tangent essays, dialogues and subjective scholarship on an occasional, impulsive basis. This month, a meditation on gainful livelihood and creative life’s work at the contended crossroads of subjective science and social currency. 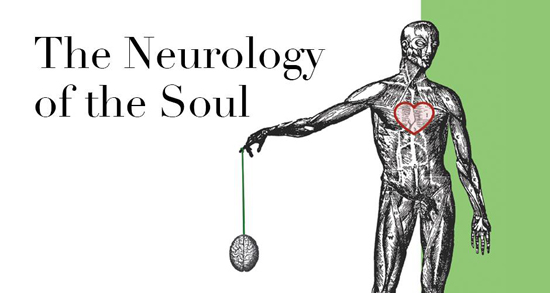 We’re told, ad infinitum, that we are in a knowledge economy — but the more we learn, the stronger there grows an underground market in mystery. My clients in corporate semiotics are specifically seeking the inexact; a reaction to the crude see-also algorithms of online commerce (as epitomized by amazon) that so promptly triggered a backlash of consumers insisting they couldn’t be told what to think. The grail, for business, is to be able to tell what someone is thinking; this is in the realm of intuition, and intuition can be educated — but only so far. Beyond its field of vision, the best that the marketing (or political) campaign can hope for is adaptability, which is what the divinations of semioticians prepare them for; not a one-size formula for what “works,” but a pattern-associating attention to and path-anticipating understanding of what is at work in a culture. 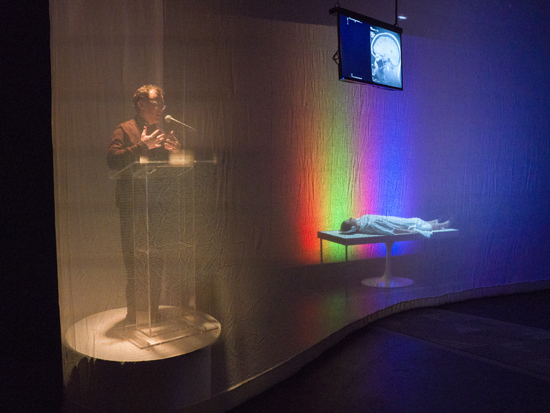 This conveys upon the consumer a greater equilibrium of agency than has ever existed in a mercantile society; to an unprecedented degree, business has to watch the buyer rather than dictating what they have to look at. We, of course, still know we’re being watched — which is why there is a parallel commerce in honesty. We don’t want to make things too easy for those who would convince us to purchase a certain product or commit to a certain candidate; so we diversify our tastes, go to fashionable flea-markets, declare ourselves political “independents.” For its part, the persuasion sector is comedically brazen in its competition for our loyalty, self-parodying the tropes of classic advertising, letting us know they’re in on our joke and have nothing to hide — and giving our mutually acknowledged appetites nowhere to be concealed, or therefore reason to be denied. In politics, the aims of the organization are stated plainly, expressed in visceral simplicities — the “dog whistle” is in fact audible to everyone, announcing the fears and prejudices that ground the party’s viewpoint and confirm its listeners’ suspicions, making explicit what reaction it’s seeking and removing our own cover (and, eventually, relieving any self-consciousness) for responding in kind.

The self-surveillance and real-time micro-memoir of social media of course aid these tasks and steepen the spiral. And yet we get lost in the weave of the web; we assume identities, we filter personality. We’re rebuilding a mystery, and so there are profuse complications in what both manipulator and subject’s desires really are. 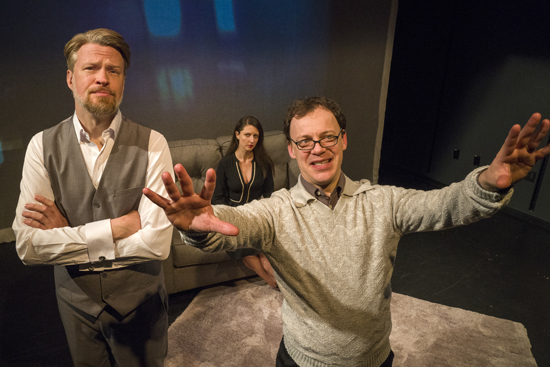 A new trinity of archetypes in the evolutionary struggle of self-definition — the marketer, the scientist and the artist — are the pillars on which Edward Einhorn’s play The Neurology of the Soul rests (if uneasily). Cognitive neuroscientist Stephen is trying to map the pattern of love in his observation of reactions in the brain of his wife, Amy, an artist whose abstractions attempt to depict her “soul” and celebrate the eternal elusiveness of the task. Stephen is lured from his university post, and Amy tempted to monetize her creativity, by a neuromarketer — so thematically wedded to his job that he’s named “Mark” — who does hire Stephen away to align the “love reaction” to consumer products and fast food, while promoting Amy’s career as a soul-replenishing sideline. 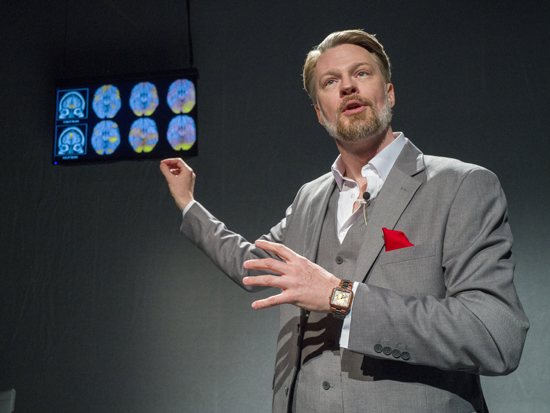 Mark’s secular sermons to an implied seminar audience punctuate the play, in a language of brilliantly crafted post-moral logic that makes rationalizations seem utterly rational. Amy’s disputes with him, in which art and commerce tip in one direction and another like a debate between God and Satan in the Book of Job, are exquisitely reasoned stances even as the two continually move each other’s targets. Stephen, the Job in this analogy, strives to maintain faith in the certainty of his metrics while living in terror of what they might conclude. Later in the play, Claire, a gallery owner and thus a type of merchant of inspiration, critiques this human triptych in ways they themselves can’t face, and appreciates shadings in their character that none of them may see.

As Stephen, Matthew Trumbull creates a refreshingly neuro-atypical yet in no way stereotypical characterization; Ashley Griffin embodies Amy with a granite integrity and perilous yearning; as Claire, Yvonne Roen is a dynamically armored truth-teller and subtly vulnerable, secret believer; and Mick O’Brien gives perhaps the performance of the year as Mark, his magnetic charisma, layered evasions, private regrets and serene self-regard suggesting some Mephistophelian mash-up of Aaron Eckhart and Stan Lee. 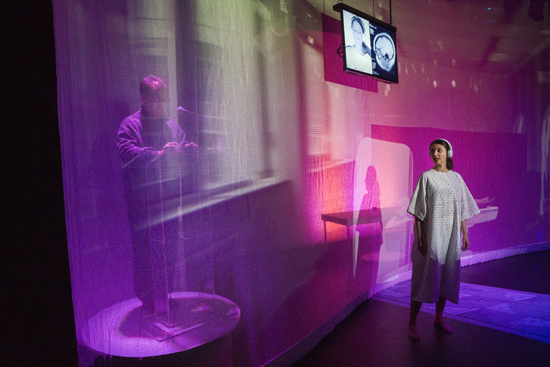 What’s… re-Mark-able, and definingly modern, is that Mark is an uncommonly, unwaveringly consensual Devil — framing every opportunity he offers in terms of what the other person wants. The marketplace is getting ever better at confessing what it’s after and coaxing such a confession from us as well; but the individual is getting better at simultaneously acknowledging the appeal of the sensual, the merits of the civic, and the validity of what we each need to sustain us. From readily accepting someone’s job-resignation to calmly freezing a millimeter away from a rejected kiss, Mark is willing to be the product you don’t choose. This in essence makes everyone else disposable to him. But what some in this play may come to see is that the other side of the “self-interest” equation, in our egocentric yet social culture and our tortuously conflicted but somehow enduringly viable market democracy, is the “mutual.” 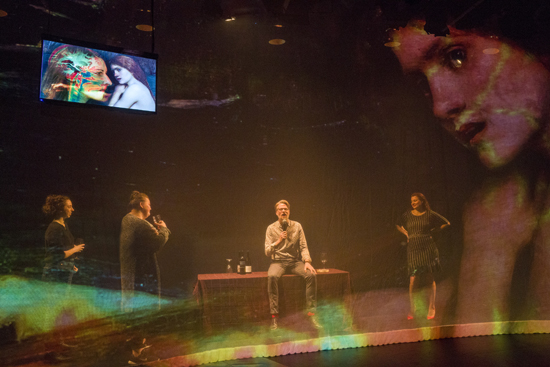 Submitting his own dramatic practice to real-life scrutiny, Einhorn held a talk with actual neuroscientist Dr. Steve Macknik directly after the performance I saw (one of three such experts set to appear throughout the show’s run). Serendipitously, Dr. Macknik, “a consciousness researcher,” has also consulted with corporate clients, studying “perceptions” and “illusions (when perception doesn’t match reality).” Noting — and expressing personal relief at — the remaining imprecisions of his profession, he pointed out that fMRI images of what brain centers are activating at given stimuli have a “resolution of understanding” perhaps a million times broader than the level at which discernible changes are happening — researchers are still seeing at the neuron level, not at the individual scale of each neuron’s thousands of synapses. So, verifiable signals of shifted affections, of the type the obsessive Stephen thinks he sees while scanning Amy, “are where we enter the realm of drama.” Of course, as Einhorn asks in a fascinating essay on burgeoning artworks in this field, “something needs to fill the gap between pure scientific analysis and what it means to us all as humans; what better medium than theatre to do so?”

Seeking a model for his market presentations, Macknik said, “the artists in society who manipulate emotions best are the directors — so we use filmclips” as examples of effective psychic and visceral persuasion. This drew a self-aware laugh from both Einhorn and the audience, and the mixed admiration and apprehension was picked up by him later when he indulged my Miltonian perspective on the material: “I will make the argument that maybe ‘the Devil’ is not always a bad thing. Blanket stigmatization doesn’t allow analyzing things case by case, and it doesn’t allow for the very complex world in which we live. Who gets to define the Devil, and is that Devil the same for each of us? Mark is a consensual [one], I agree, but then I want the audience to ask what are the implications, good and bad, of free consent to his techniques and philosophy.”