Being one in a monthly series of deep-cutting, far-drifting discussions on the comicbook artform and its cultural influences, expressive aspirations and unintended consequences — diverging this month only to honor the just-passed Stan Lee with a kind of retroactive conversation composed from unpublished comments in the past two decades of ye editor’s personal files…

Stan Lee may have been his own favorite writer, but he was definitely his own greatest creation. He was not just comics’ first rockstar, lecturing at some of the same campus venues that counterculture idols might play, but, even more significant, he was comics’ first designer label — his signature over the opening page of everything Marvel published for decades, as familiar in its world as that of Walt Disney’s (whose company would much later collect Stan’s). He was the brand made flesh, his monthly column/proto-blog Stan’s Soapbox (the Warholian resonances are hard to miss) serving as a kind of certificate and seal on each issue of a Marvel comic. And he was the face of an imprint, and an industry — with all the connotations of surface that this might convey.

Artists like Jack Kirby left indelible images in your mind, but long before I came to differentiate the identities of my favorite illustrators, Stan Lee was the name I had in my head. His art of personality was quintessentially of its times, and it would change with them — the photographic record shows him shape-shifting from clean-cut early-1960s organization man to late-’60s international playboy to 1970s handlebar-mustached hipster; a kind of G-rated Hef who would welcome the likes of Federico Fellini to the Marvel offices. 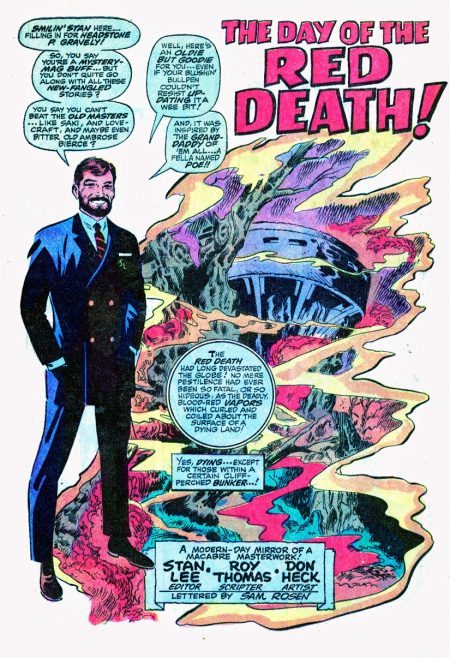 The first time I “spoke” with him he didn’t know who I was or even that we were speaking; in the ballroom of a late-’70s comic con where Stan was appearing, the fans were allowed to write down questions and have them picked at random. Mine, which got selected, praised the then-recent reunion of the Lee-Kirby team on an early graphic novel starring the Silver Surfer (but outside of current Marvel canon), and, anxious for him to return to regularly writing his finest work, I asked “whither the Norrin Radd of the established Marvel Universe?” He started his answer by saying, “’Whithuh’ — this guy should be writing for us!” 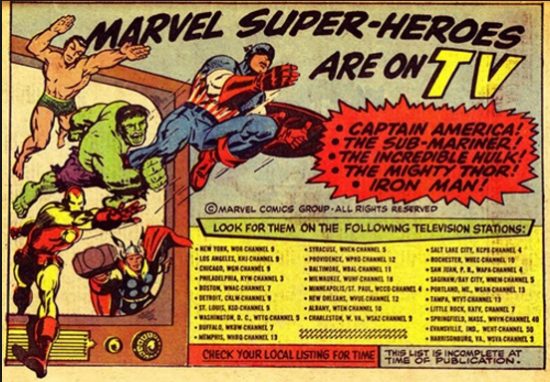 The next time we conversed, a quarter-century later, we couldn’t see each other, as I asked a few questions by email routed through my editor at The Jack Kirby Collector. I’d sought out Stan for his own viewpoint on Marvel’s first media crossover, the barely-moving syndicated-TV cartoons produced by Grantray-Lawrence in the mid-1960s. We’d gotten a great interview in the can from surviving principal Bob Lawrence, who was still in awe of Stan’s “genius” and remembered a Stan tirelessly and inventively working on script rewrites, for which Lawrence had set up Stan (with his wife Joan) in a Manhattan residence close to the cartoon-studio. A commuter from Long Island at the time, this may have been Stan’s first taste of the Hollywood treatment he would later get used to; the (unpaid) artists did not know their work was being used until they saw it on TV. At the outset of our exchange Stan warned me of his “world’s worst memory” — a point of controversy with many of his collaborators, which would play out in the press and courts — and then, upon me asking about the temporary second home in the city, he readily replied, “I was thrilled to have Bob rent a small penthouse on Madison Ave. for me (30 East 60th street, as I recall).” 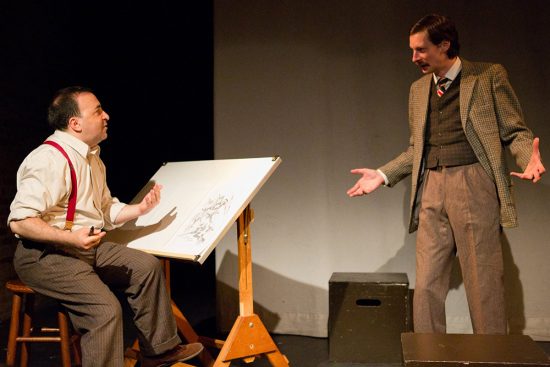 Stan’s story can never end because he was always perfecting it, and everyone has a story about him too. Tom DeFalco, Marvel’s editor-in-chief from 1987-94, once told me how the company’s “2099” line began with an impromptu Knute Rockne speech from Stan: Lee had been collaborating on a graphic novel about Marvel’s dystopian future with artist John Byrne, which was still being teased prominently as Byrne stormed off the project. “Tom, here’s yaw chance to be a SUPA-hero,” said Stan, upon handing off the creation of an entire consolation-prize line of comics for DeFalco to oversee.

Stan could convince anyone to do anything (including their best work ever), and this gift for encouragement seems to have been matched with an aversion to confrontation that could erase communication, too — though it leaves behind great stories. Comics author, pop historian and early Marvelmania fanclub manager Mark Evanier once told me how everyone at Marvel lived in terror of when Stan would go on vacation, since that was when they knew some layoff axes would fall. “Someone would come to Stan and say, ‘Sol Brodsky [Marvel’s then-production manager] just fired me!’ and Stan would go right in with him and say ‘Sol, what is the MEANING of this?!’ and get the person reinstated. Then… he’d go on vacation.” 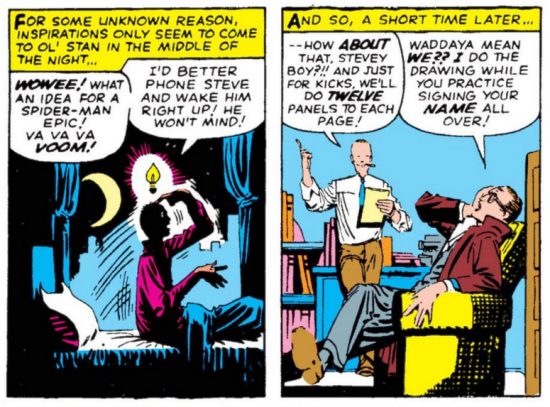 Famously, some of Stan’s cohort quit first. Artist Steve Ditko, the (probably principal) co-creator of both Spider-Man and Doctor Strange, clashed with Stan and early on started disappearing to his studio, plotting and drawing those strips (and The Hulk as we know him) and just dropping them off for Stan to add captions and dialogue to, before abruptly leaving Marvel for years (and Stan forever). But DeFalco tried to put the team back together — for one of those 2099 books, Ravage. “From the moment they greeted each other, the mutual respect was obvious,” Tom told me, “and I think they really wanted to work together. Stan presented his ideas, Steve listened, and asked a few questions, and they began to discuss possible storylines. Steve eventually decided to pass, but opened the door for another project. After Steve left, I had a truly Twilight Zone moment. Stan turned to me and asked me if I had any idea why Steve had quit Spider-Man so many years ago!”

Stan let so much credit accrue to him (siding with company over fellow creators in legal disputes, embodying Marvel as the only figure to cameo in all of their movies), that revisionist backlash has caricatured him as a mere impresario and not a genuine partner; someone who is nothing without his collaborators, though in their chosen medium neither half is enough. He does seem to be a writer whose gift is dependent on the spark of the right co-creator to an uncommon degree, but those matches could happen up until his last days (if increasingly infrequently) — like his Silver Surfer graphic novel with avant-comic auteur Moebius in the mid-1980s or the brilliant Watchers story / Iraq War allegory in an early-Aughts issue of What If?, the latter admittedly with a Kirby-channeling Dale Eaglesham, but each long after Stan’s Marvel heyday. 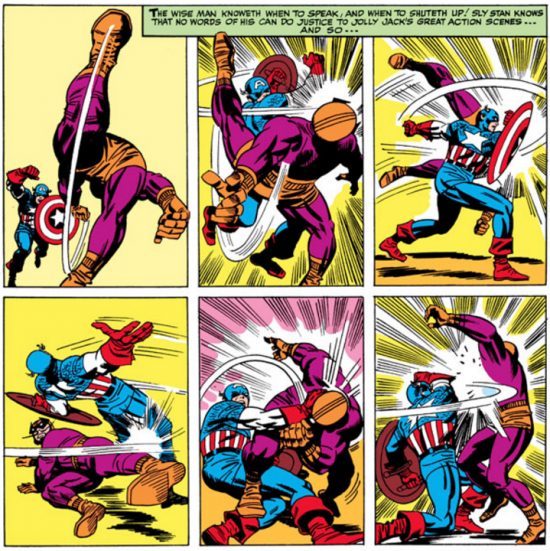 In any case, Stan cultivated a detachment from the material quite consciously; his running commentary, like the heckler at his own standup act, anticipated the self-critical pop-culture of Mystery Science Theater 3000 and caught the skeptical mood of the 1960s with a golden ear — we were supposed to both admit our love of “base,” vernacular culture, and question cultural conventions of any kind; Stan carried it forward from MAD and the producers of the Adam West Batman show probably got it from Stan. In a way both amoral to those who could have shared in his rewards from a clarification of their contribution, and pathbreakingly postmodern, Stan, to a strange and significant degree, was not so much the author of his work as he was the star of it. 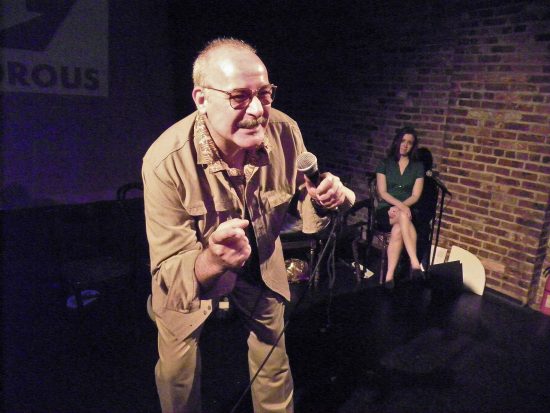 Few have ever had cause to question his market instincts or connoisseurial eye, and from his supervisory distance he could sometimes see the masterpiece inside other artists’ marble blocks. It’s become common in pop-culture scholarship to observe the margin-notes on Kirby’s penciled pages, in which he not only staged the story that would bear Stan’s sole name as writer, but started drafting his script for him. Compared with the published versions, sometimes Stan seems to make a hash of Kirby’s intentions and literally impose a narrative that ill fits. But in some profound cases — like the change from Kirby’s idea of the Silver Surfer as a construct of the cosmic predator Galactus who then rebels Adam-like against his master; to a once-mortal man who enslaves himself to the godlike being in exchange for sparing just his own world and then repentantly revolts — shows a superior sensitivity for high-stakes moral drama that no one has ever disputed came from Stan. Kirby’s profound concept (at first drawn into the visual narrative with no involvement from Lee) keyed something in Stan’s soul like the missing component in some metaphysical quest.

In the same way he could grasp what made a story most compelling, Stan could see through to the best in people. The third time I spoke with him we were both there, though in more ways than one I almost wasn’t. I’d been drafted at the last minute to be replacement moderator on a 2007 New York Comic Con panel featuring “The ’60s Marvel Bullpen” (including among others Stan, “Fabulous Flo” Steinberg, and Daredevil art legend Gene Colan). I got to see Stan and Flo reunite for the first time in decades as they were filing in, and heard Stan say “I’m happy to get started once I see who’s in chahge” as they milled about and I got nearer. “That would be me, Mr. Lee” I said, sticking out my hand, and then I got a vivid up-close view of what Being Stan is like, as two very large men were immediately moving me backward, until I explained myself to them as well. While his crew cordoned around him, in the eye of the storm he was super-nice and super-funny (“Why does everyone always say I ‘need no introduction’? I WANT the introduction!”), and excited to catch up with his old gang (“We’ll GET to you,” he said vaudevillianly as my first question waited a bit longer while he was busy praising and inviting comments from his mythic colleagues).

It was a better history lesson than any Q&A, as we all saw these creators who had made legends together immediately resume their steady friendship and ease into their old roles, Stan clearly orchestrating the conversation while encouraging everyone’s participation, and I could see how the Bullpen in its best days had worked; Stan observes your strengths and summons them; it’s not calculation or flattery, he believes in you, and you want to make it true. 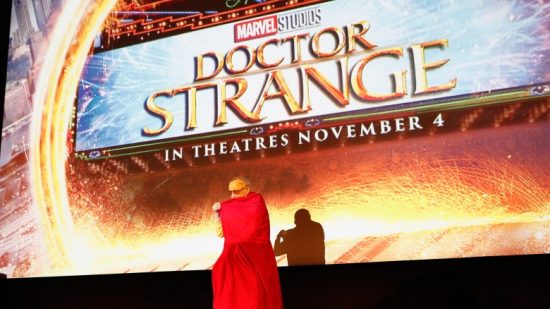 By that time, Stan was on a kind of endless extension of those college tours on which he’d first shared the comics gospel, a premium-ticket presence at every industry gathering and a talking head on every news story and historical survey. It’s a measure of his ambassadorship that so many people seem to think that the artform’s future suffered a devastating blow with his death, whereas what really came to an end with him was comicbooks’ Golden Age, of which, after his near-century of life and its 80-year vintage, he was the final significant survivor. We’ve lost the last part of the past, but Stan never liked to stay there long either.

Stan Lee’s shadow will continue to tower over comics’ long future. That shadow could cover up the contributions of his many co-creators, and he sometimes seemed too far up to notice or to care enough. But he more than anyone first brought the comics artform into the light. There’s no way he could have done it alone. But that’s okay, because none of us can.