We are the ghosts who will haunt our own future. Souls committed to camera and scattered on the air to be called down from and drift back to the only cloud we may ever really inhabit. Our stories casting clear shadows over those who carry on in their consequences. Congratulations, you’re already immortal, which also means you’re walking gone.

The elegiac premonition is gaining more and more currency as we feel and fear a loop closing on the whole human program. Lyrical tragedies that unfold in the future but feel like they’re being looked back on, match the real-life sense that we are looking forward to a tomorrow that is already over. The posthumous romance of a Blade Runner 2049 or Black Mirror is seeping into our self-image, but we have to live it out anyway, right? 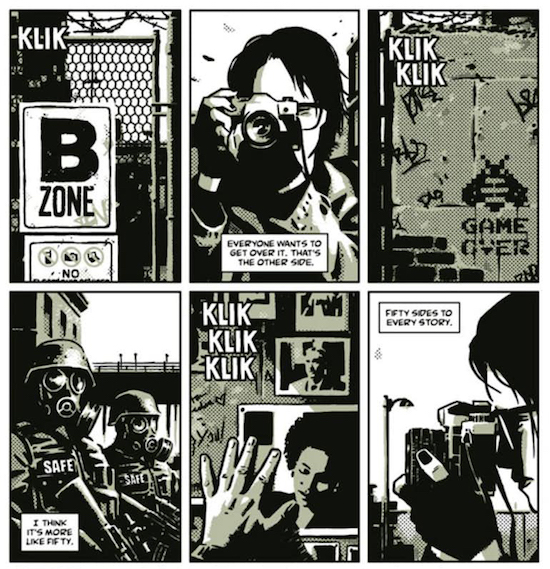 In the somber comic The Seeds co-conceived by artist David Aja and writer Ann Nocenti (and published by Vertigo founder Karen Berger’s line at Dark Horse comics, Berger Books), we see around the corner of contemporary America, its urban hives, industrial wastes and agrarian badlands, in a swirling litter of incident that matches the fragmentary existence of those left in the terminal empire. Tabloid-clickbait reporter Astra is following the faint trail of a meaning to keep living for; renegade farmers Jack and Susan are raising bees and roughing it in the broken heartland; and street-citizen Lola is wandering the night and wondering about a new lover who may be even more, let’s say, alienated than he seems.

Aja’s textured shorthand style, at once photojournalistically bleak and pop-art fanciful, serves the story’s true-crime and reverse-fairytale atmospheres with equal perfection, and Nocenti’s background as a journalist and filmmaker in deprived but undefeated parts of the world speaks compellingly to the familiarity and frightfulness of the scenario. Together, they weave a pattern of enigmatic cyclical images and shadowed mental spaces that is building to a monument of mournful beauty. I spoke with Nocenti to unearth the thoughts behind this drama I can’t get out of my mind… 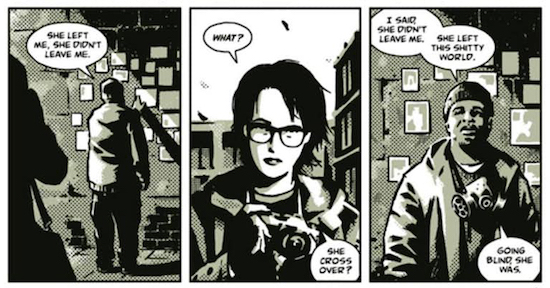 HILOBROW: Journalists were traditionally heroes of American pop culture, from Clark & Lois to Woodward and Bernstein; since Reagan they’ve been seen more and more as “the enemy of the people.” Explorers were the original heroes of finding what’s new — like Astra’s editor always wants. Maybe journalists are the opposite, because they tell us what’s true, and we’d now rather not know?

NOCENTI: Astra is based on my experiences as a journalist and documentary filmmaker. When she says “there are 50 sides to every story” it can be said of fact, fiction and even memoir. How do you tell any story, and is every story you tell really a story about yourself?

In documentary filmmaking, after someone invites you into their life, and gives something of themselves to you, it is difficult to make the hard choices of what to leave in the film. Have you invaded their privacy too much? Will you show them in a bad light? After filming in Baluchistan, my documentary partner and I knew we had many films in our 20 hours of footage, we could cast any light we wanted by which footage we selected, and that meant whatever “truth” we chose was not their truth.

When I was working with my students making films in Haiti, they knew their country was seen through the lens of poverty, and they led me to stories that showed the joy tucked inside the blues song. They wanted to get their “truth” out in front of the usual hopeless poverty story. And the older I get, the more I realize I can’t trust my own memories of anything. We take our life stories, polish certain “moments” until they become some kind of myth we tell about ourselves. Anyway, I wanted The Seeds to have a documentary feeling to it, in terms of snatching bits of truth, and yet truth keeps changing in context as you turn the pages. 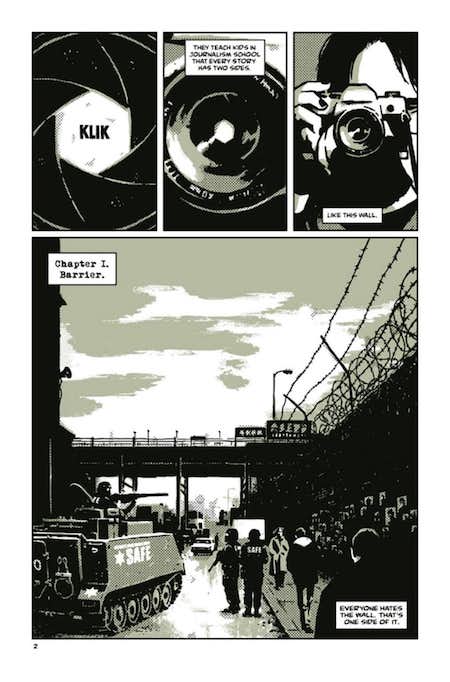 HILOBROW: Apocalypse has fallen from the antiseptic heights of THX-1138 or Rollerball to the more downmarket dystopia of a Soylent Green or Looper. In The Seeds things don’t even have to look catastrophically trashy. The few things that do seem out of place — a little kid wearing a gas-mask, a barbed-wire barrier in the middle of a city instead of at the border of a desert — are given a chilling ordinariness by David Aja’s objective treatment. Is the scariest end-of-the-world the one we can recognize (and for that reason maybe not see coming)?

NOCENTI: One of the beautiful things about comics is the often unspoken conversation between writer and artist. David Aja reads the script, and then processes the entire thing through his “truth.” He set the tone, mood, and look of everything. An early version of the script was set in the 1990s, then it was set to reflect a 1950s tabloid journalism vibe. One day David said he thought we should set it in the near future. So we ended up with a future so near it could be now, and at the same time a ’50s noir feeling. I wanted the story to unfold slowly, to reflect the point of view of a documentarian recording bits of “truth” and eventually finding which of the 50 stories she wanted to tell. 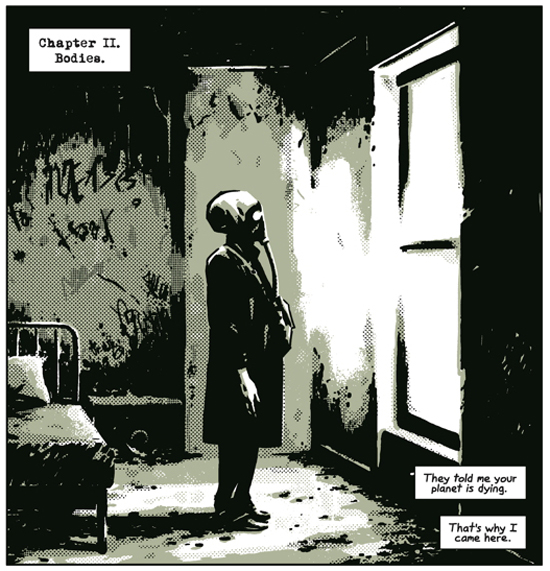 HILOBROW: The Seeds’ story is satisfyingly image-driven as befits its medium — the motif of the hexagon in honeycomb and camera-iris and chain-link fence and digital period being just the most noticeable example. Do you prefer to have those puzzle-pieces to work with? Does it leave open possibilities beyond what you could just write down?

NOCENTI: For The Seeds, I thought, why not start this story with something blowing helplessly in the wind, and start by saying we’re not in control of anything? Then my mind will wander through too many possibilities. Eventually, through many email chats with David Aja, we decided on opening with the bees, the first clue that nature is watching us humans. Then David took the honeycomb hexagons and created a little visual virus — he began putting hexagons in unlikely places. Then Astra’s boss Gabrielle began calling her “honey” in a slightly sexist way. The entire story was built with a back-and-forth process like that. 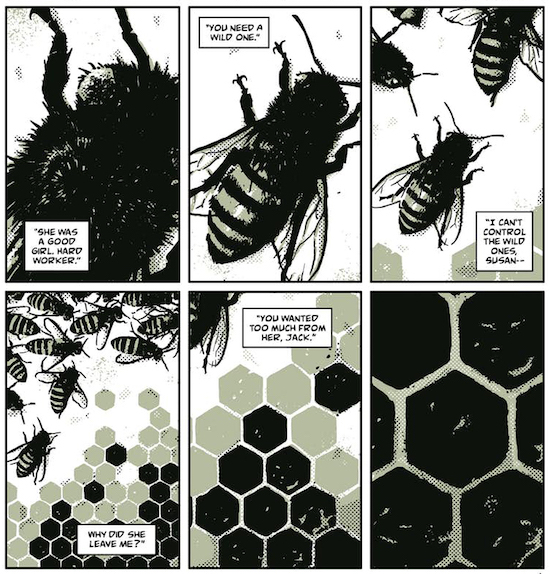 Most of my career I’ve written on hard deadlines. There was barely room for my many, wonderful artist collaborators and I to breathe. This is the first comic I’ve written with time built in. Karen Berger understands that comics need breathing room. I find that being able to write a story, put it away, dream about it, let my unconscious add things… it feels essential to the process. I write a script for The Seeds, and then David takes all the pieces and juggles them. He cuts things, adds things, moves things around, pulls out motifs, figures out what to put in a frame. He’s the artist, I’m the writer, but together we make one storyteller.

The Seeds debuts from Dark Horse Comics/Berger Books on August 1, 2018.