THIS: The Other Anvil Drops

Johnny got married to Frankie, then got his gun, and came marching home, combed his hair and needs to think of a joke. This normative boy is the real symbol of America, being whatever we require him to be throughout two centuries of mass culture, especially when we have only a vague idea what we want. Most pertinent for the present conversation, Johnny could play a guitar just like a-ringin’ a bell. 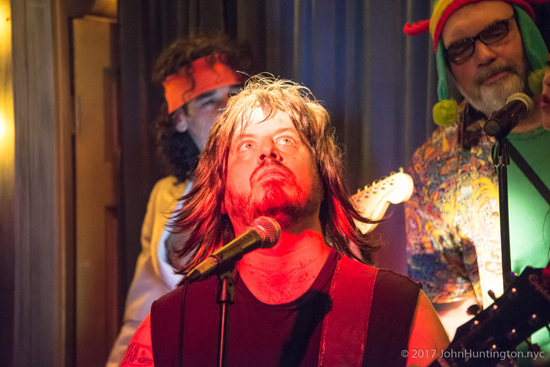 Johnny appeared for one night only as both the star and subject of I Live to Rock ’n Roll: A Rock Opera About Rock, and the title that can only be defined by itself was well-taken; for Johnny, One is the primest number.

Johnny went straight from the pop zeitgeist, into one ear and out the other of Jesse Krakow, who’d been cultivating this double personality over 20 years of absorbing every possibility and mannerism of rock as both avid listener and in-demand player across the map of so-downtown-it-looks-like-up New York. I Live to Rock ’n Roll, Krakow’s opus with words and music by Krakow, puts him upfront at last — albeit under the champion hair-metal headdress of everyman and no-man Johnny. 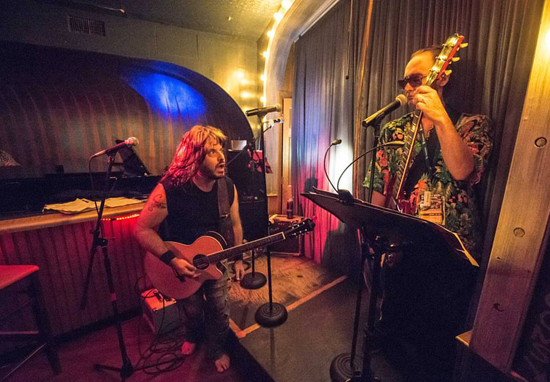 It’s the kind of music we’d hear if shows like The Wall were actually written by the character they’re about, yet Krakow and his band are the rare type of satirists who can make you laugh without anyone in particular being laughed at — all dreams are absurd until we make them come true.

Krakow works the delicate trick of being self-aware about a character who is exclusively self-referential. As Johnny journeys from idyllic band camaraderie to inevitable breakup, from first love to bitter disillusionment, and from DIY sellout to mega-sellout, encountering competitiveness from bandmates and betrayal by girlfriend all the way (as seen from behind his eyes), both the goodtime pub-rock anthems of pub-rock good times and the dark dramas of destitution and doubt are drawn exclusively from his own inside world — as everyone from Foghat to Pink Floyd might advise, write what you know, regardless of how much. 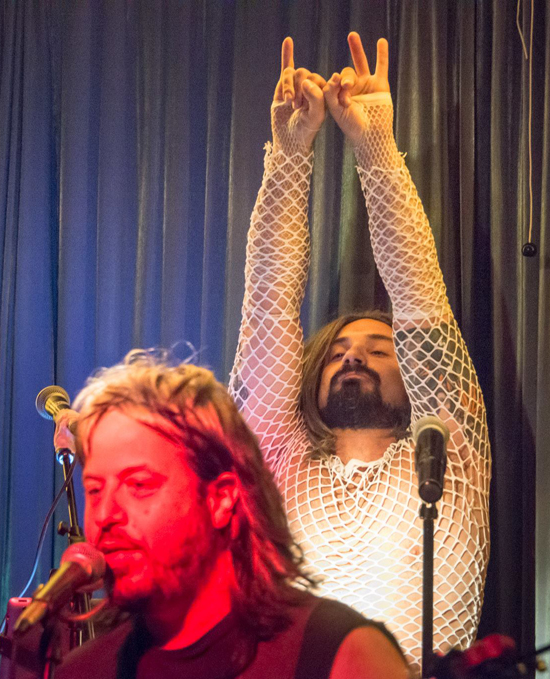 By the brilliance of Krakow’s interpretive ear, we live through every one of Johnny’s Spinal Tap-esque evolutions of whatever-it-is-people-want-to-hear, from the acoustic-Ramones “Rock ’n Roll Feelings” to the symphonic Queen-divided-by-Living-Colour “Merry-Go-Rock” to pseudo-reggae and sub-Neil Young. I’ve seldom heard anyone absorb the tendencies of a musical canon with such fidelity and emerge with alternate classics rather than pastiche, but this show does it. Even though, inevitably, as a martyr-in-his-own-mind, Johnny ends up “on trial” for “Rock in the First Degree” before briefly fearing that he has “Lost the Battle of Rock,” Krakow himself is supremely nonjudgmental about his comic but not quite evil alter-ego.

The score plays like a better Rock of Ages all written by one auteur, and I was sure, with amusement, unease and enthusiasm, that had Johnny been a real guy, I would be watching this show not in a hipster club but on Times Square. (Though the two locations were only a few blocks apart, so like Johnny I won’t give up hoping.) 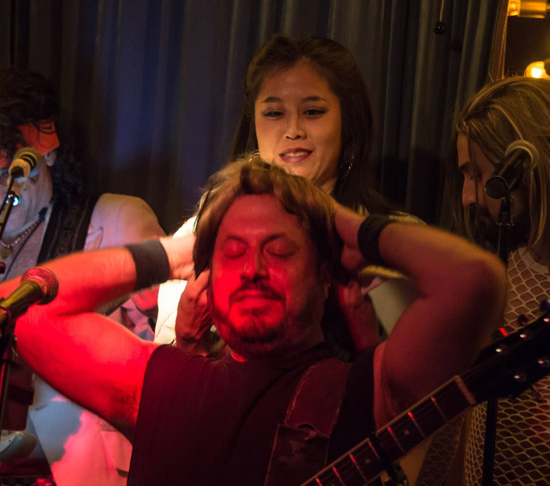 Krakow is utterly earnest and musically convincing in his mythic frontman role (even when his big-hair wig at one point flies off, to be settled back upon his head by “Johnny’s Girl” like a crown. Of rock.) The set is sequenced so there is never a second of breathing room between when any of the superlatively skilled soloists finishes and Johnny steps back in to trample across their applause before it starts. This doesn’t stop the towering talents that Krakow has knowingly assembled. Mike Messer shreds his songs and carves clichés in gold as axeman Ace McFresh; Joanna Choy radiates arena-siren gravitas as Johnny’s aggrieved ex; Drew Radowsky is a maestro of histrionics as piano-player Captain Ahab; Alec Cumming is sagely deadpan as stoner mascot Crazy Tino; the omni-gifted Mike Fornatale burns down the house as the sympathetically satanic A&R Man; and a manically messianic Mark Ospovat and dourly angelic Katia Floreska resound in the joint role of what Johnny imagines as The Future of Rock (circa 1972, that is, as they seem beamed in from hippie-era gospel and sci-fi musicals). 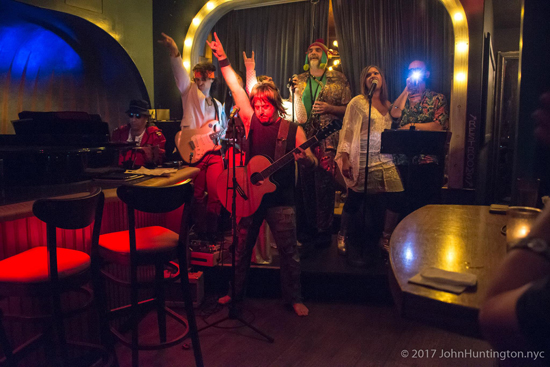 I Live to Rock ’n Roll: A Rock Opera About Rock is the soundtrack I could spend the rest of my life with. I can’t say exactly who this “Johnny” is. But he doesn’t give rock a bad name.