THIS: Dying Is Easy

Ten comedians walk onto an island, and not one of them may walk back off. It’s a great idea for a personality-filled, metaphorical murder mystery satirizing our celebrity-surfeited, resource-drained late capitalist survival struggle, and the lightbulb is screwed in by writer Fred Van Lente — best known for the kind of comics with little speech-balloons and fistfights in lycra, here making his prose-novel debut with, wait for it, Ten Dead Comedians. Tough crowds of critics can stay home, as Van Lente crafts a tense, startling and relentlessly hilarious race through the life-and-death challenges and already-damaged psyches of a cross-section of humor icons, called to the isolated island estate of a reclusive king-of-comedy for what they think is some epic, career-inflating joint project but turns out to be the worst vacation ever, though at least probably the last. 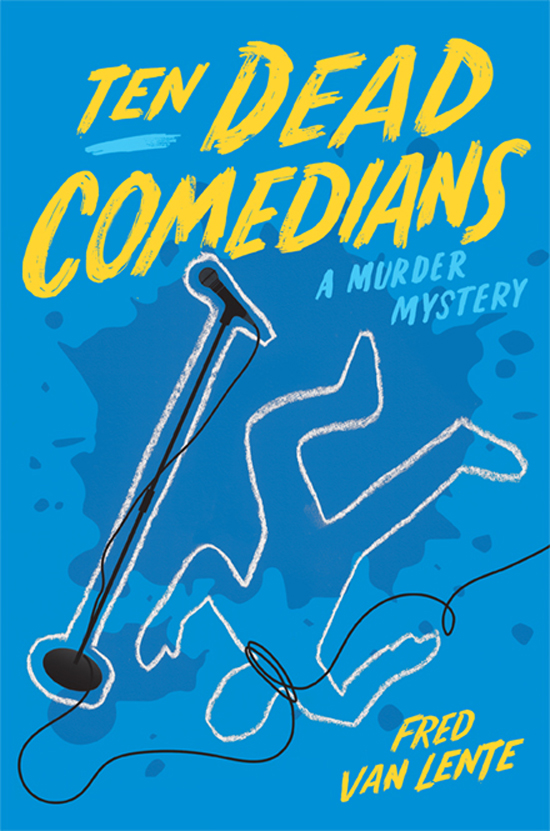 A microcosm of the fault lines of gender equity, class “authenticity” and racial identity that are cracking up our country, the cast are recognizable for their composite parts (brilliantly remixed) — a strange performance-art/Gallagher hybrid; a pioneering attack-artist as mean in real life as Joan Rivers had the right to be but wasn’t; an Ivy League blueblood masquerading as a red-state bumpkin; a podcasting social-justice careerist; a late-night talkshow legend/slimeball; etc. In Van Lente’s funhouse mirror of psychological scrutiny, all of them get reflected back to us as textured, real people. His animated, artful prose finds the life-preserving wit and darker undercurrents in this marooned group’s struggles to trust each other and/or stay alive on their island purgatory. The rest of us are stuck with each other and not going anywhere nearly as fast as the book’s shrinking population, so I thought it best to meet the author face-to-face and come to some understanding… 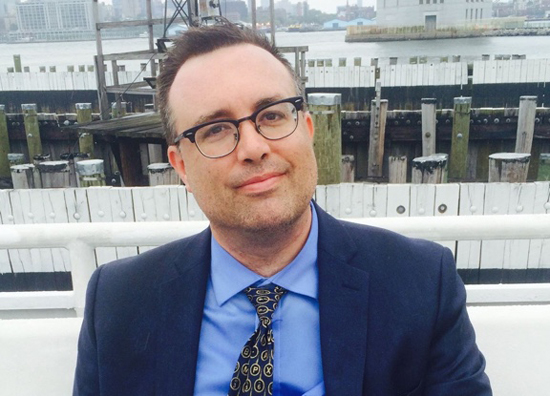 HILOBROW: So, was it intentional that, a few pages in, you have us rooting for which characters will get killed, or was that just a happy bonus?

VAN LENTE: I think everyone should draw their own conclusions…the interesting thing about Agatha Christie’s And Then There Were None [an acknowledged model for this book] is that none of those people are terribly sympathetic, or nice, or… they’ve all done something wrong even if it’s not what the killer is accusing them of. So I just thought I’d come up with a bunch of interesting characters and see where the cards fall in terms of how readers think about each one. I don’t really need characters to be sympathetic, either as a reader or a writer. In doing my nonfiction work in comics, I often say, when you learn about a subject, everybody becomes sympathetic; I find all my characters to be sympathetic. And characters without flaws tend to be pretty boring.

The first guy… I guess we should avoid spoilers; the first person who gets killed off in the book, the editors didn’t necessarily want that person to be the first one killed off, because they thought there would be a lot more to explore with that character, and my attitude was, “Then that’s definitely why he should be killed off”; all of them you should feel that way about. If I can’t make them all compelling then I’m not doing my job correctly.

HILOBROW: A pitfall of writers more known for a visual medium (comics, film, TV) is that there’s an impulse to substitute for the visual dimension with excessive description — but this book adapts perfectly into the kind of compression and suggestion that makes the reader’s mind put together the “picture” between your words. What was the source for switching to those muscles?

VAN LENTE: It’s funny, the editors actually made me go back and put more description in. This is my first published prose novel, but I’ve published prose short stories, I have at least two or three finished novels collecting in a drawer somewhere… or to be modern, on a desktop, collecting dust — but, having written comics for so long, I try not to over-describe in [a script]. I feel the ideal panel description is a single sentence, though you can’t always get that level of clarity or brevity. I’ve also tried my hand at screenwriting a bunch of times, and there they just beat you with a stick, to not… you know, people get bored, reading a lot of scene description; most people who read screenplays just skip right to the dialogue, they kind of gloss over whatever the scene description is. That’s kind of how I write. For most consumers of narrative, what they care about is the characters, and dialogue tends to be the most direct way to get character. I think that has a lot to do with it.

HILOBROW: I don’t think I’ve ever read another book that is so a-joke-a-minute while also holding together and moving ahead as a narrative; it’s very much not that writers-room syndrome of just setting punchlines into the putty of a nominal plot. Did all of that humor come in the course of writing the book, or were there successive passes, in which you first laid down the story-layer, then more of the personality, or did all this humor reel off as steadily as we see on the page?

VAN LENTE: Having been a wiseass most of my life, coming up with that stuff does come somewhat naturally to me. And it was certainly fun to write people who are funny people, but all had distinct points of view. The harder thing than toggling between plot and jokes was expressing the jokes in such a way that the characters didn’t flatten out and all kinda sound like Fred Van Lente. And the copyeditors helped me quite a bit with that, to make sure all those voices were distinct.

HILOBROW: I find this book a very observant time-capsule of our fraying social fabric… do you feel that the sidelong view of comedy is a better vehicle for that than head-on polemic? 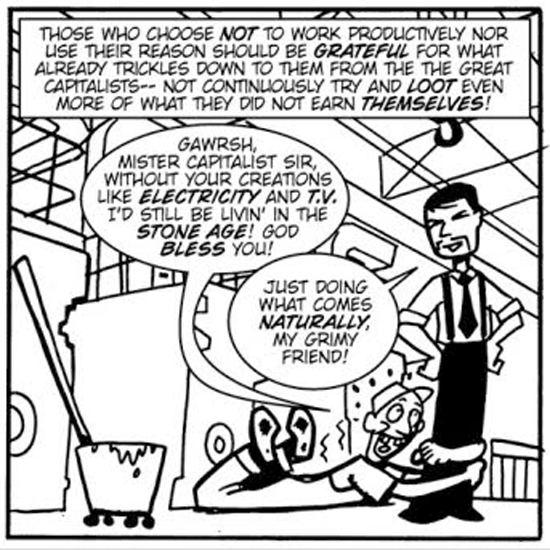 VAN LENTE: I just came from Denver Comic Con, and one of the panels I was on was about… the title was “Reach, Don’t Preach” — which sounds like an After-School Special — but, we were talking about how to avoid doing polemics, and I brought up the example of Atlas Shrugged, in which you get 600 pages of thinly veiled parable, and then John Galt stands up in court and he delivers a 20-page monologue that, if you were too dumb to figure out what [Ayn Rand] was saying in the previous 600 pages [laughs] — the problem with polemics is they tend to be boring. On the other hand, god knows Ayn Rand has sold more than anything that I’ve done or any person on that panel had done, so maybe polemics are the way to go. I see fictional stories as problems to be solved — I write nonfiction too, so if I want to get on my soapbox I have that available to me — but [in fiction] as a person, you just have a particular point of view, and that comes out in the writing.

HILOBROW: Even so, since November, it’s like we’ve become a nation of court jesters, laughing past the graveyard and keeping the thin-skinned dictator off-balance… but that might just mean this book comes, serendipitously, at a perfect time.

HILOBROW: I don’t know if you personally know any comedians — I don’t know any, or at least anyone who just does standup — but when they’re interviewed most seem to be deadly earnest, if not outright depressive, offstage. Yet the characters in this book are funny at all times…

VAN LENTE: I got a great compliment, one of the people I showed the book to early on was Daniel Kibblesmith who’s a writer on The Late Show With Stephen Colbert, and he asked me if I’d ever been a standup comic. I assume comics all bust each other’s balls all the time… interviews are [another] kind of performance, it’s different than when people are…trying to solicit information, or desperately shooting their mouths off about something, or upset.

HILOBROW: As I read the book, I was thinking, “Why isn’t Fred in front of a mic every night?” And speaking of when people are… was it your idea to have those Watchmen-esque transcripts of each comedian’s “real-life” monologues interspersed throughout the book?

VAN LENTE: I was about to say that’s the first time this book has been associated with Watchmen, but while I was promoting it at Denver Comic Con somebody said, “Ya mean like Watchmen?” and I was like “Whu—?” [and they said] “You know, The Comedian” and I was like, “Oh… no… not everything is about superheroes.” [laughs] Those pages are my favorite thing about the book, because initially I didn’t wanna do them. I was really frightened that just having the monologues on the page, without the live delivery, without the laughs, would really come across as kind of flat. And I just thought it would be too hard to write eight or ten different monologues in eight or ten different voices. BUT… the plot of this book reels off as fast as the jokes, and the original And Then There Were None is only 50,000 words long — and my book is… 20,000 words more, so take that, Agatha Christie! — but that was my contractual obligation. So I realized very early in the process that if I did not add the monologues, I would fall below my contractually mandated page-count. So, it became a necessity, and fortunately I think it turned out well. We had actors a couple of weeks ago in a recording studio in Manhattan do the [texts], and most of these actors had never met me before so they had no reason to kiss my ass [laughs], and everyone was laughing and having a great response to the monologues, so it was very gratifying, and a great confidence-booster to know that, “Yes, it’s funny! It’s not just funny in here!” [points toward own skull] 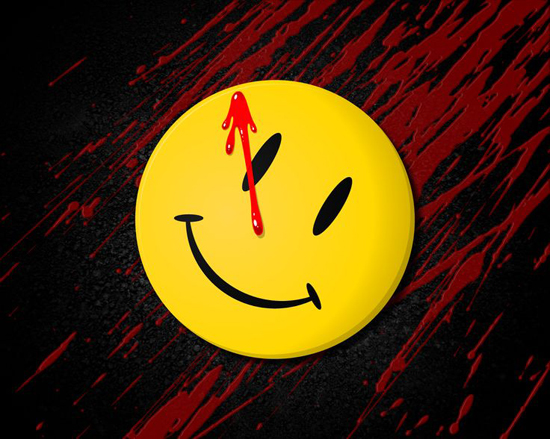 HILOBROW: I love them, they’re almost like this parallel novel of how the comedians’ relationships formed (or decayed) and how their personas and inner lives are different (when they are). Do you see this book translating to other media, since it’s so much about them?

VAN LENTE: There’s definitely been Hollywood interest in it, and it’s not even out until Tuesday [see below], which is very gratifying, so, we’ll see how that goes.

HILOBROW: I felt that the dreaded improv scene, when one of the characters tries to take the other survivors’ minds off their peril, could go straight to screen.

VAN LENTE: That was definitely a sequence where I was like, “Should I try and be more sophisticated about this? Or should I just literally do the first things that pop into my head?” Then I thought, “well that’s what the characters would do, so I said, screw it.”

HILOBROW: It definitely captured that feeling of cringey corporate team-building most of us have had to go through at least once.

VAN LENTE: I’m way too controlling for improv. I think I would have a nervous breakdown if I had to do it for any extended period of time.

Ten Dead Comedians is released by Quirk Books in all formats on July 11, 2017.