THIS: Outside the Black Box 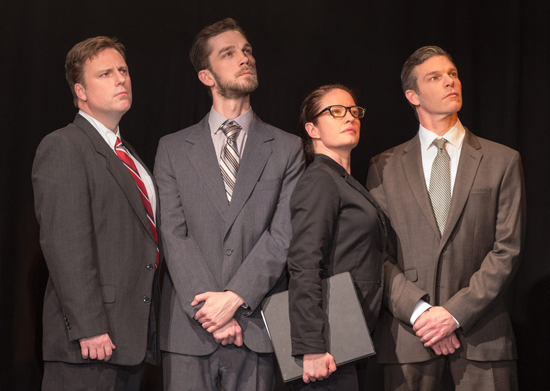 A veteran IBMer I used to work with would tell me about the “war rooms” employees would seal themselves in when some new idea was racing to market; the food ordered in, the trashcans ordered not taken out. It helps the top-secrecy if even you don’t know what you’re doing, which is the unspoken premise of Enterprise, a new off-off-etc. play by Brian Parks. The taut ensemble of four midlevel office-lords in a feudal corporate structure spend the play in a kind of voluntary siege, trying to come up with a never-described report they think can save their spiraling company from ruin and themselves from obscurity.

The white-collars of earlier workplace fantasias would speak in platitudes from motivational manuals; the characters of Enterprise speak in pitches straight from their preconscious; Parks’ good ear picks up the progression from the packaged corporate jargon of the Reagan-through-Clinton years to the completely extemporized abstractions of Bush-through-Trump. 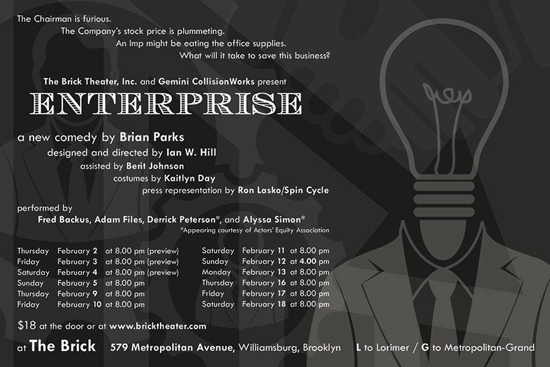 “Business built this view,” intones one of the quartet to another while surveying the world through a panoramic highrise window, but what’s really being framed is his self-image; looking in, he and she are all we see (and later he will note the matching glass tower across the street as a great mirror of their own). His soliloquy also homages the golden age of phallic accomplishment (soaring communications towers, surging radio waves saturating the stars), and the gray-flannel age of fetishized executive panache; greatness by decree is the driving faith of all the characters’ ornate monologues, and the self-monumentalizing is a clear (though, Parks assured me, serendipitous) counterpart to America’s new ruling style.

Parks tells his story in short, shuffleable vignettes and free-associative jags; each character is given more than one bravura filibuster, and the hole-digging is hilarious. Like a Presidential run-on, each unspools farther and farther from any point the speaker may have meant to make, while elaborating feverishly on scraps of stereotype from an outside world none of the employees seem ever to have visited even before their current all-nighter. Company-man Weaver rhapsodizes American values as “a country song about a pickup truck loaded with beer and hope”; his counterpart Landry later agonizes about being thrown out on the street “with the drunks and rats and tinkers… selling goatskins off carts.” 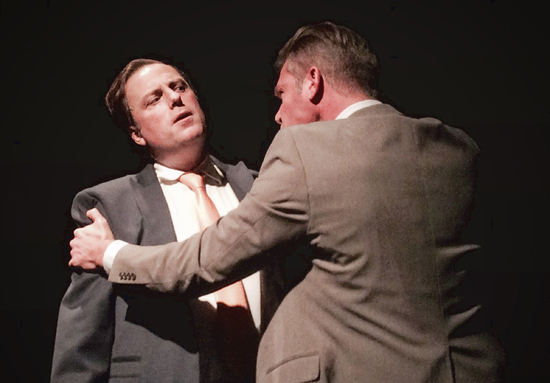 Working themselves up over a dread that’s never detailed, and over-emoting with gourmet hysteria, the ensemble are like a nightmare Marx Brothers, or maybe a Kafka Quadruplets. As Weaver, pillar of pontification, Derrick Peterson is the amoral center of the circus, an earnest buffoon played by a superb actor who, in the meta median between the two, is playing some other actor who thinks he’s in King Lear. Alyssa Simon is zealously uproarious as Owens, an idea-woman who thinks she can smell economic upheaval like some industrial oracle and swoops between insistent cheer and titanic meltdown. A gifted inhabitor of the most sincere and silly emotional states, Simon here pressurizes her clowning to explosive effect; her concentration is such that at one point her bulging, independently moving eyes alone steal the show, as Owens attempts to summon a “vision.” As Landry, Adam Files has all of Weaver’s pomposity and little of his confidence, swaggering on the razor’s edge of panic gracefully. The low man on the corporate ladder — or so it seems — is Sanders, played by Fred Backus with bravura cringing and Trumpian befuddlement. Backus usually plays more alpha roles, and seeing him in a new discomfort zone was fascinating and just as rewarding.

After the show Simon described the characters’ speechifying to me as a mantra to instill belief in their own delusions. They’re also so privileged that they need to manufacture things to be afraid of; at one point, as insomniac delirium sets in, Sanders and Weaver begin to imagine the office equipment’s little LEDs as glowing predatory eyes in a dark wilderness, while Owens and Landry seriously entertain the possibility that an “imp,” who eats pencil-erasers and drinks Xerox-toner, is bedeviling the office-supplies and undermining the pair’s efforts against their workplace competitors. This kind of makeshift folklore is having real-life consequences, but luckily the enclosed, declining civilization of Enterprise is only imploding on itself. 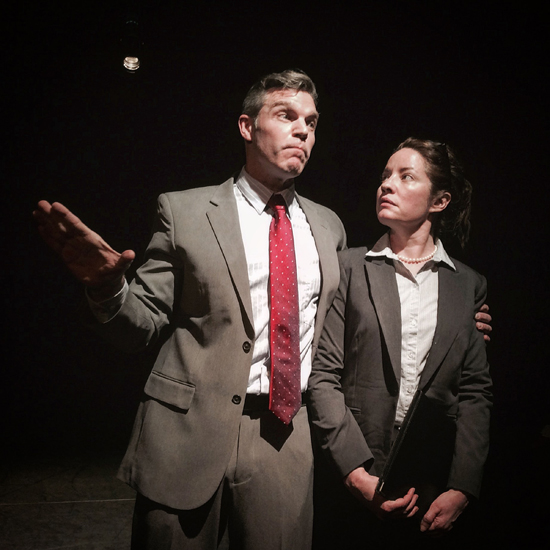 The superstitions, cartoonish xenophobia and ever-encroaching sexual entendres of the cast’s behavior can be played for laughs, though director Ian W. Hill of course knows to play that dead seriously, with a stark Brechtian stage of four desk-lit identical-clone workstations in a sea of black; the occasional angelic shaft of fluorescent elevator light; guard-tower spotlights for the serial setpieces. Hill’s sound-design is as always ingenious, drawing on a thesaurus of popsongs about work which color the interstices between scenes and cut off abruptly like that job you still haven’t finished after a full day of phonecalls you’re not allowed to ignore. Hill is a wizard of carnival pacing and orchestrated mob-scenes, but here he adapts to the play’s wry, clenched tension with a precise mosaic of fitful outbursts and pained pauses.

The characters invoke symbol and metaphor several times, and their thinking is uniformly fuzzy enough that they could be dreaming, or dead, or embodied literary constructs, and not know it (after an hour of their vividly believable surreality I wasn’t sure myself). At some pivotal points Landry asks “what’s the forecast on gravity,” and while physical existence is still objective enough to know how things turn out, now more than ever it may pay to check twice before jumping in a world turned upside-down.