THIS: What’s the Point? 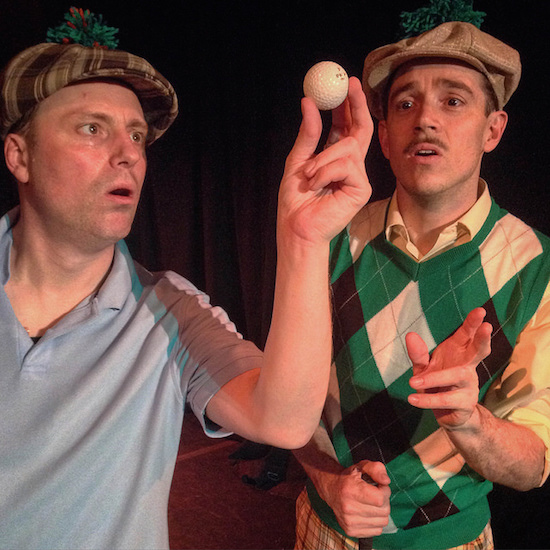 Somewhere over the course of modernity, the odyssey got replaced with the reverie. Jason actually traveled far and fought monsters; Dorothy was apparently just in a concussed coma before returning to black-and-white Kansas.

Still, the late 1960s and early ’70s sought to split the difference — field trips to nirvana were a staple of pop, especially all-ages pop, in that period; good trips, one might say, as psychedelia was swapped in for the fairytale sublime, both to entertain (Yellow Submarine) and morally educate (The Point!).

Brian Parks’ manic script for his new play The Golfer, under the precision panic of Ian W. Hill’s direction, draws on the more deranging children’s fare of the surreal Looney Tunes era — a Marx-Brothers-ist anarchy often comes to the fore (heh), but The Golfer’s canvas is much less bound to realism.

Avoidance of adulthood is what unites the comedy and cartoon referents — office-drone Flynn (an alertly flummoxed performance by Broderick Ballantyne) sleepwalks through the Kafka-ish monotony of his unspecified occupation and dodges family commitments at home, while the passion of golf outings pulls at him and the darkness-cursing rants of the IT guy (one of several wryly explosive roles from Bob Laine) counterpoint Flynn’s own indifference. 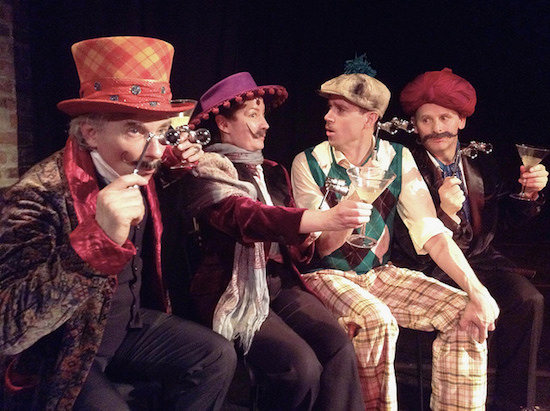 He wants to be play, not work; this bodes ominously for his neglect of the grownup obligations that apparently issue straight from God, when a maybe-not-stray lightning bolt strikes Flynn’s golfclub. If this really is a divinely decisive act, it’s the last instance of intent we see for some time, as Flynn is cast into a maelstrom of absurdist setpieces, a purgatory of nonsense authority and amorphous peril. He gets framed for murders in literary classics he seems to have fallen into; clenched-jaw detectives interrogate him (Fred Backus and Laine again, drill-sergeant-ing with mythic dumbass conviction); he gets pressed into sweatshop servitude by Santa Clause (a blood-pressure-poppingly blustery Laine again) and gets an unsolicited and unanaesthetized extraction from the Tooth Fairy (a hilarious caricature of funky officiousness from Rebecca Gray Davis). He is visited by doppelgangers of his mom (Alyssa Simon in gleefully bland, diabolically drifty top form), while Abraham Lincoln has no time for him. Singing eels and the bitter spirits of opera-castratis’ scrotums serenade him mournfully. An idealized, unnamed “New Girlfriend” literally hangs on Flynn’s neck in cross-the-threshold position, for a parody dance fantasy that shifts the burden of impossible male expectations back onto Flynn in sub-Fred Astaire stagger (a burst of steely, without-a-net exuberance by Lex Friedman, who also plays every taskmaster in Flynn’s office, golfcourse and family-life with an intense buffoonish certainty — a telling equation in Flynn’s responsibility-averse worldview).

Parks has a sharp ear for the inanities of both political and pop-culture commonplace, but when Alice wandered through such forests of symbol, she was giving thought and speaking truth to the burlesques of convention and officialness Lewis Carroll placed in her path, whereas Flynn just wants to duck back out to what’s comfortable and familiar. Everything sounds like a battle or a harangue to him because he’s so unwilling to hold up even one corner of the conversation. This guarantees he’ll learn as little as the pompous powers-that-be he crosses paths with (including a string of preposterous monarchs and colonial loyalists from the extensive shtick-library of Backus’ avenging mind). Parks has the wit to give us a “quest” that is all middle; the existential special-effects of a Labyrinth or Little Prince without the appended lesson on either end. 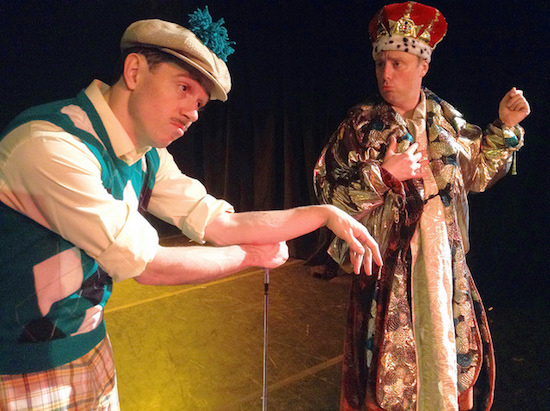 At times it feels like an even more sarcastic, though not unsympathetic, variation on Lou Reed and Robert Wilson’s Time Rocker, and Anna Stefanic’s scoring of Parks’ clever neo-operetta lyrics are the stuff of after-school-special hall of fame. The “Posh Trio,” Laine, Simon and a lavishly stereotyped Timothy McCown Reynolds as a coterie of costume-party aristocrats who school a dumbstruck Flynn in the fine points of everything from opera to polar-bear hunting, deserve their own kids’ show. Hill himself, pressed into service to replace a cast-member who was taken ill, is effervescent as several otherworldly experts (priest; astronomer; Flynn’s all-seeing, not-much-paying-attention dead dad), and the script Hill has to occasionally brandish is a deus-ex-machina loose thread I’d be happy to see stay in the show.

Flynn moves in circles (most characters recur and regrets resurface), so I wouldn’t have to tell you how his lost-in-spacetime story turns out even if I were sure I knew; suffice it to say that the play does a diligent job of making its audience, if not its characters, question the nature of resignation and escape. In either case Flynn surrenders himself to the currents of fate, but in the hands of The Golfer’s inventive dramatist and vigorous interpreters, it’s clear that the story isn’t gonna write itself.