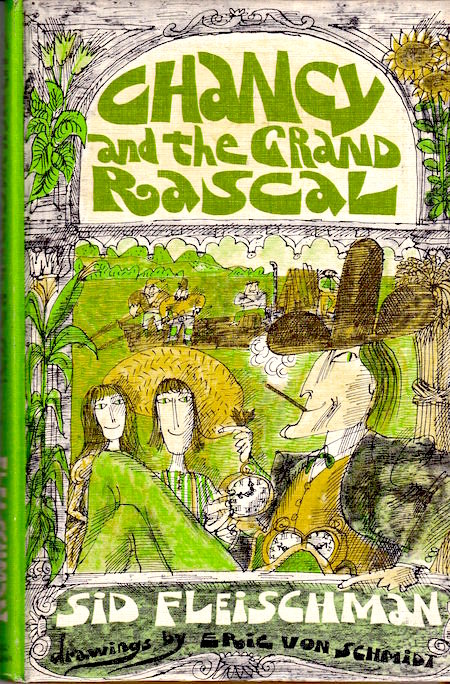 Separated from his family during the Civil War, an Ohio farm boy sets out to locate his orphaned brother and sisters. He soon falls in with a wily, charming, peripatetic con-man and BS artist… who turns out to be his long-lost uncle, Will Buckthorn. Together, Chancy and the Grand Rascal see the world along the Ohio River and the Great Plains frontier, seeking their family and getting into and out of scrapes. After many adventures, they discover that Chancy’s siblings have been taken in by a pretty schoolmarm in Sun Dance, Kansas. What’s a Grand Rascal to do? As a “coming-and-going” kind of man, can he be persuaded to settle down at last?

Fun Facts: Chancy and the Grand Rascal is the final installment in an extraordinary run of titles that Fleischman cranked out in the early 1960s, including: Mr. Mysterious & Company (1962, his first children’s book), By the Great Horn Spoon! (1963), and The Ghost in the Noonday Sun (1965). I’m also a fan of Jingo Django (1971), which was recently adapted as a Quentin Tarantino movie. Just joshin’.