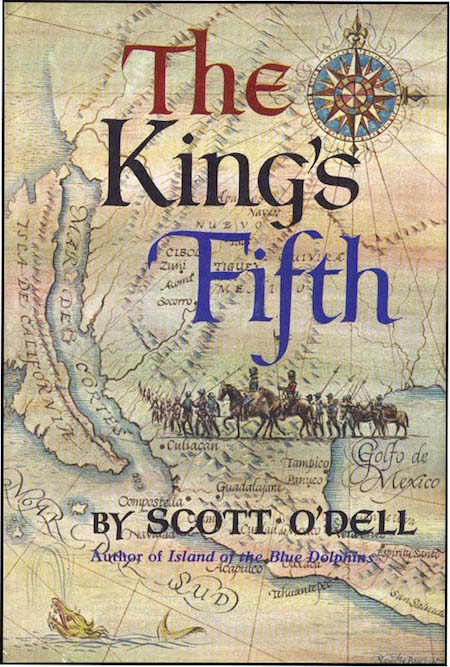 Think of The Treasure of Sierra Madre, but set in 1540 and written for older kids. During Vasquez de Coronado’s expedition from Mexico through parts of the present-day southwestern United States, a rogue conquistador strikes out on his own in search of the mythical Seven Cities of Gold. He is accompanied by the story’s narrator, Esteban, a teenage Spanish cartographer who becomes one of the first Europeans to catch sight of the Grand Canyon and the Colorado River. The conquistadors’ lust for gold drives their cruel treatment of the native Indians, and their mutual mistrust. We learn that Esteban is later imprisoned for having found a treasure without submitting the “King’s Fifth,” a tax levied by the King of Spain on precious metals. What has happened to the mule-train of gold?

Fun fact: Written by the author of the much-admired YA adventure Island of the Blue Dolphins (1960). In 1982, The King’s Fifth was adapted into the Japanese-French anime TV series The Mysterious Cities of Gold. Oh, and the few good ideas from the Disney movie The Road to El Dorado (2000) appear to have been lifted from O’Dell’s book, too.