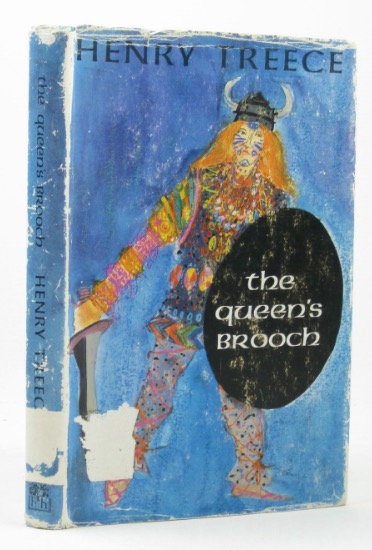 Henry Treece’s historical adventures The Bronze Sword, The Queen’s Brooch, and Red Queen, White Queen. Treece, a British poet and author, is best remembered today for his YA historical novels set at the end of the Viking period and during the Roman conquest of Britain. These three novels are set during Queen Boudicca’s uprising against the Romans. The Bronze Sword is the most famous, I suppose, but I’m fond of The Queen’s Brooch, in which Marcus, the son of a Roman Tribune, familiar with Celtic customs and friendly with the Celts, becomes a warrior… only to encounter horrific behavior on the part of tribal chieftains and their Roman conquerors alike. In the end, he becomes a proto-modern figure: adrift in a heartless world.

Fun fact: As a poet, Treece was a founder of the New Apocalypse movement, a reaction against the politically oriented, machine-age literature and realist poetry of the 1930s. I also recommended Treece’s Viking Trilogy, which includes Viking’s Dawn (1955), The Road to Miklagard (1957), and Viking’s Sunset (1960); and his 1956 prehistoric yarn, The Golden Strangers, one of my all-time favorite adventures, which depicts the encounter between primitive Britons and Indo-European invaders.