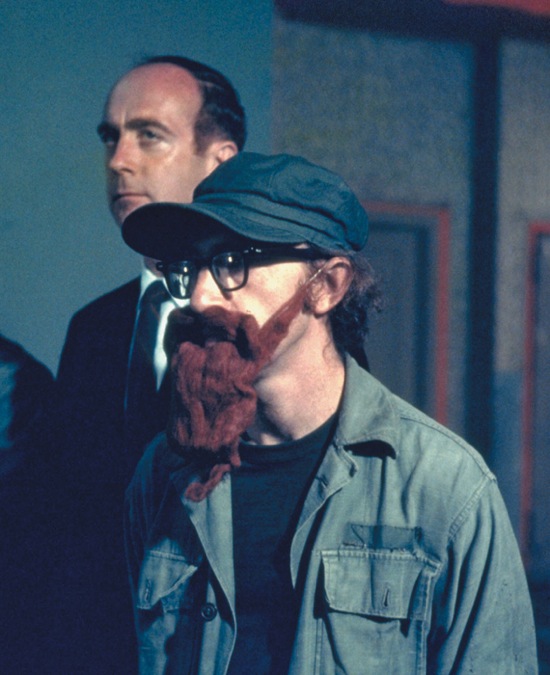 The 1960s was a terrible decade for film and television comedy, but it did produce a stellar class of comedians working the beatnik demimonde: Mort Sahl, Phyllis Diller, Jonathan Winters, Joan Rivers, George Carlin, Bill Cosby, Richard Pryor. Not to mention WOODY ALLEN (Allen Konigsberg, born 1935), whose career as a stand-up comic and author is too often overlooked. The man who for the last 20+ years has produced a tepid stream of thin genre studies and glossy middlebrow works like Match Point and Hannah and Her Sisters was once capable of brilliant lowbrow stand-up (“First prize goes to the Burkowitzes — a married couple dressed as a moose. The moose comes in second. The moose is furious.”) and enduring highbrow films like Annie Hall, Manhattan, The Purple Rose of Cairo, and Stardust Memories. He was at his hilobrow best, however, during that period in which he made comedies like Bananas (1971), Sleeper (1973), and Love and Death (1975), and in which he wrote the humor pieces collected in Getting Even (1971), Without Feathers (1975), and Side Effects (1980). In written bits like “The Whore of Mensa” and “If the Impressionists Had Been Dentists,” he hacks through the syllabus like Groucho Marx thrashing Harvard’s five-foot shelf. “The Irish Genius” even manages to squeeze jokes out of Yeats — which is no small conjuring act. Instead of waiting with mildest interest for his latest European travelogue, film-treats that pour molten caramel cinematography over the lightest wafers of plot, we should all be spelunking the back shelves of used bookstores for Woody Allen’s lost genius.