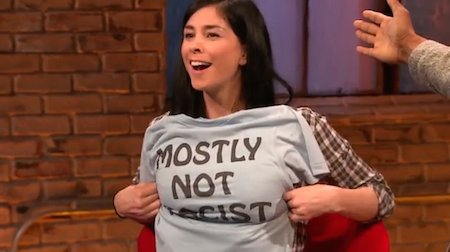 Those who don’t remember history are doomed to repeat it as farce and those who don’t see it happening the first time are fated to be the butt of their own jokes. SARAH SILVERMAN (born 1970) is the voice of those who can’t hear how they sound. It’s never too late to be too soon, as we refuse to really confront what we don’t understand about what we’ve done to each other, and ol’ SS is always there to trivialize rape and incest and prejudice and genocide in a way that reminds us how we laugh these things away to put off dealing with them in any way that doesn’t parade your privileged status among the untouched or make you feel superior as a victim. A traitor to her educated upbringing and celeb good looks and cheerful disposition, Silverman has no place to be put in so she gets every authority and bigot and escapist and know-it-all laughed out of where they’re hiding. Transgression is always good for a laugh, or a utopia, and observing the absurdity of how badly we behave is a way of witnessing how much better we could be. The universe doesn’t care, but she does, and everything you can’t say, she just did.

On his or her birthday, HiLobrow irregularly pays tribute to one of our high-, low-, no-, or hilobrow heroes. Also born this date: Woody Allen, Gary Panter, Richard Pryor.