[Between October 2005 and June 2009, HiLobrow contributor Devin McKinney worked with intermittent perseverance and passion to record his reactions to music and music-related stimuli at a blog called Pop with a Shotgun. He has selected some of his favorite posts for this reprint series. This installment, originally posted December 27, 2006, is the last of ten.] 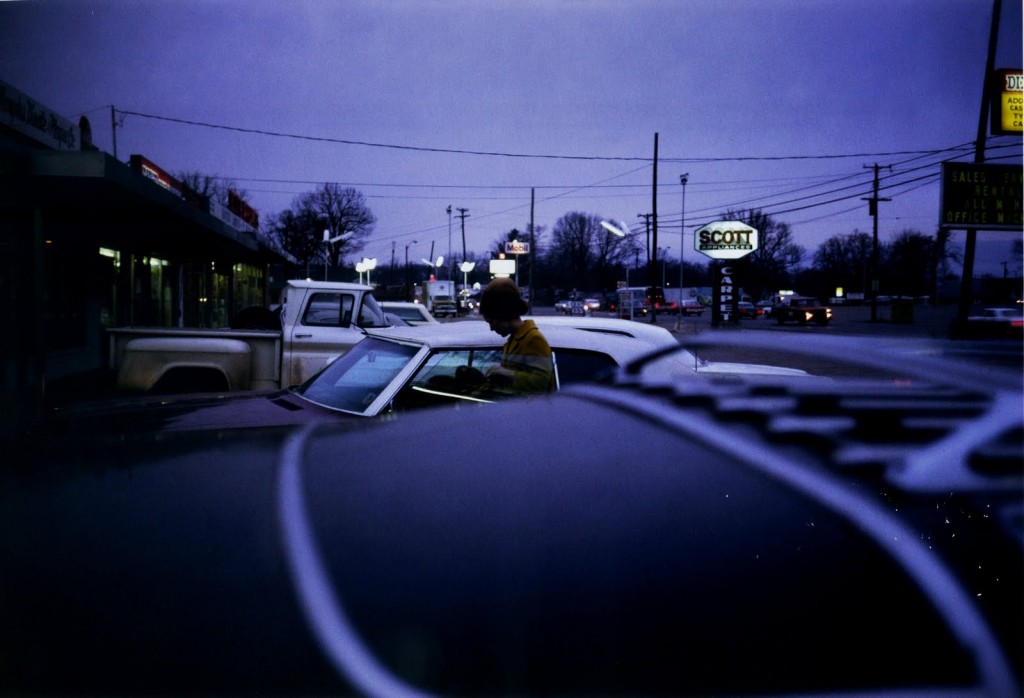 In a few weeks we’ll be making our first trip to Memphis. So we watched with particular interest this 2005 documentary about Eggleston, the photographer-eccentric who has made Memphis his home for many years, and whose boldly colored, intensely vibrant shots of bottles, plants, cars, empty lots, sloping roofs, shadows on walls, and the profiles and backs of people with baroque hairstyles have been taken mostly in and around the city where Elvis, Martin Luther King, and Arthur Lee died.

Eggleston has at least a couple of solid rock and roll connections: one of his photos adorned the cover of Radio City (1974), Big Star’s second album; and in the mid-Eighties he did a series of photos inside Graceland, making all its tacky gold and gaudy velvet fairly vibrate in the frame, like shots from the chambers of a tomb whose king was imprisoned within but still alive, who had just a second ago stepped out of the shot, leaving his presence behind. 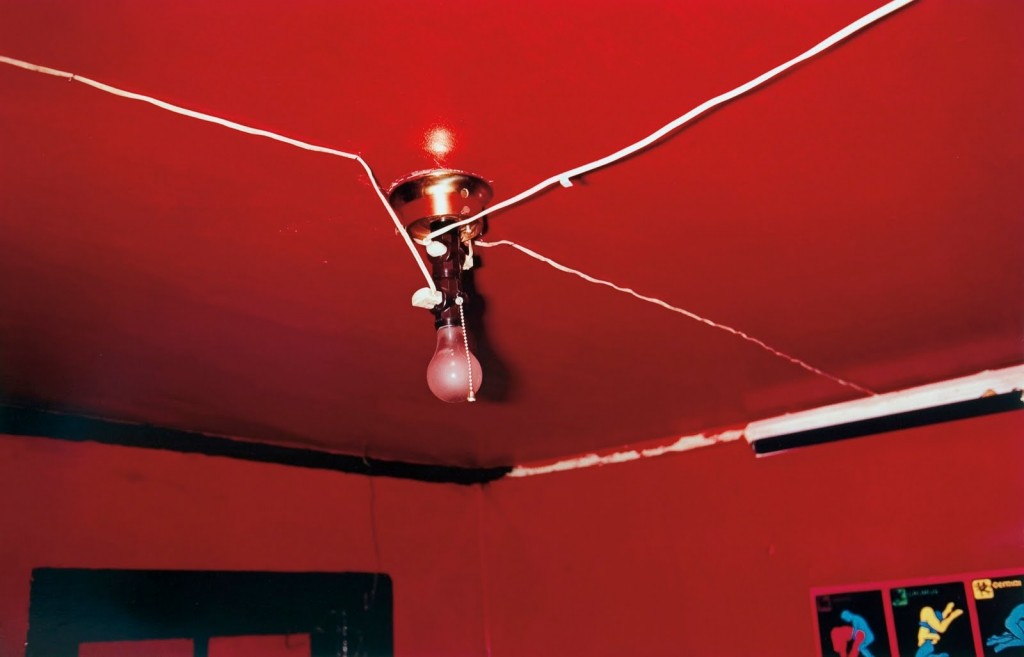 Early in the film Eggleston — a mumbling nonentity of a man, shuffling and self-absorbed, though it may be partly an act, you know those artistic types — was seeking bandages in a Kentucky drugstore, asking the druggist’s counsel; and over the loudspeaker was playing, bless the music of chance, “Love Me Tender.” Nice. Elvis; Memphis; druggist, help me, I’m hurt. Tenderness. Nice.

There was footage shot by Eggleston with a prehistoric video camera in Memphis in 1974, around the time Big Star came to him for his cover shot of a fire-red ceiling, lone light bulb and perpendicular white wires. Eggleston’s trick as a videographer is to get the camera as far up the noses and into the pores of his friends and family as he can. Faces loom bloodless and shiny. “You’re a posing asshole, Eggleston,” one friend says, humorlessly. “A mirror would be better.” The music playing in the room is Cat Stevens, “The Wind.”

The movie ends and the credits come up. Roy Orbison is singing a song from his last album, 1989’s Mystery Girl, a beautiful Orbisonesque song called — hey! — “In the Real World.” Extra-sibilant sssss’s on the quiet intro, as if Roy has removed his bridgework and is singing tooth to gum. Then the band kicks in, that full, tragic Orbison sound. End credits, white over black. So beautiful. It would be enough for the film to end there. But it doesn’t. 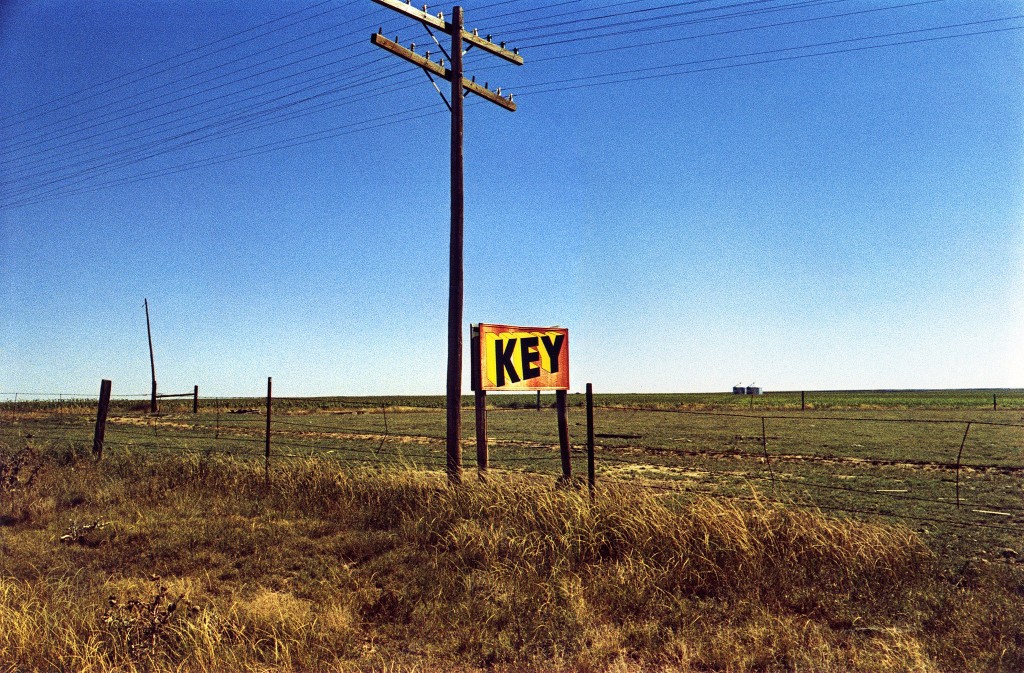 After credits, we cut to video of Eggleston with his eyes closed. We watch; the music continues. We realize Eggleston is listening to the Orbison song we’ve been hearing: it is being played for him by a friend, a friend we’ve seen earlier in the film ranting about cancer, and who, we’ve been told, is now dead, though not from cancer. Eggleston listens to Orbison, fellow adoptee of Memphis, who made his first great sides at Sun Studios; Eggleston listens, eyes shut tight.

“So beautiful,” he says. He’s hearing this for the first time. He appreciates; he knows. “So beautiful.”

Again: it would be enough for the film to end there. Again: it doesn’t.

Eggleston and his dead friend start to talk about how lucky they are. How lucky we are, to be alive.

That’s it, Eggleston says. You said it, right there.

No, the dead friend insists, no, no, no. We’re lucky to be alive now.

Because they didn’t have Roy Orbison in the Middle Ages.

Like the dead friend said, we’re lucky to be alive now.

ALL POSTS IN THIS SERIES