[Between October 2005 and June 2009, HiLobrow contributor Devin McKinney worked with intermittent perseverance and passion to record his reactions to music and music-related stimuli at a blog called Pop with a Shotgun. He has selected some of his favorite posts for this reprint series. This installment, originally posted July 8, 2007, is the ninth of ten.]

ELVIS PRESLEY
Let Yourself Go!
Elvis’ Greatest Shit!!
An Afternoon in the Garden
Adios: The Final Performance
Having Fun with Elvis on Stage
Cut Me and I Bleed: The Other Side of Elvis

Somewhere among his many fever blisters of visionary fury, Lester Bangs recorded the (no doubt widespread) fantasy of splitting open Elvis’s fat, drug-enriched corpse to reveal the roiling pharmacopoeia within, and gleefully ingesting the chemical-visceral stew in a vile burlesque of transubstantiation.

There are plenty of releases, official and unofficial, that allow the curious to come as near as possible to doing pretty much that. Generally they catch Elvis in less than guarded moments: singing, talking, performing for an audience or just communicating to a few in a studio. Ungainly, inglorious moments of drug, blubber and blood; unheroic, ungracious, un-American fugues of extreme profanity, anger, irreverence. Just as every metaphor worth using has two uses — to catch a dream, and apprehend a horror — every form and version of the star-spangled Elvis has its dark double. 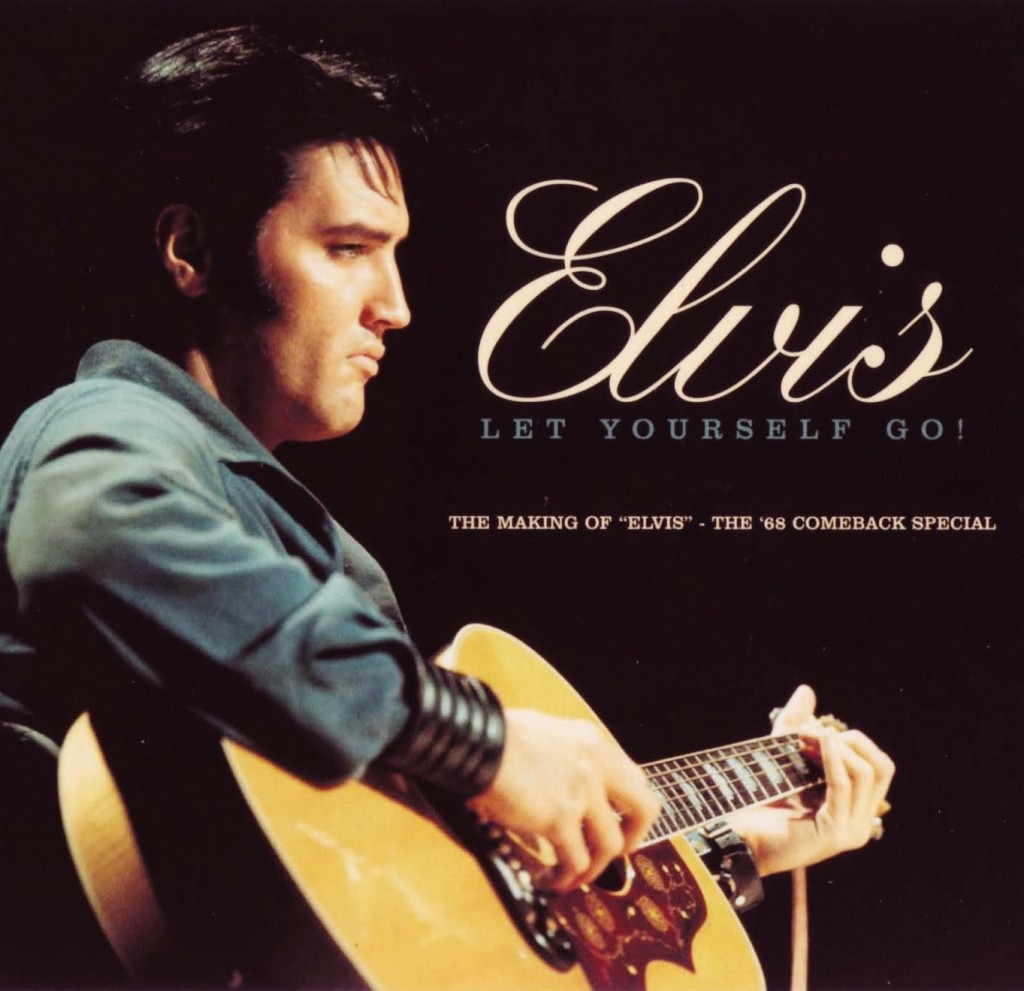 On the fan-friendly, estate-official side — edited and equalized, airbrushed and windblown, stamped “approved” by Graceland Global Industries Consolidated or whatever it’s called — there are such forays into spontaneity as the recent Let Yourself Go! The Making of “Elvis” — The ’68 Comeback Special, which not only supplements the original Elvis TV Special soundtrack but telescopes the many bootleg discs of rehearsals from the Burbank sessions that preceded the legendary broadcast. Elvis starts out with a remarkably bold and bloodthirsty take on “Trouble” that dissolves in laughter and the star inexplicably commanding, “Get that dog outta here.” Following are many startups and breakdowns, blurps and bleeps from the control room, and an ongoing underlayer of listener frustration as Elvis’s dramatic, committed vocals, recorded in pieces for edit purposes, are continually hacked off at the climax. 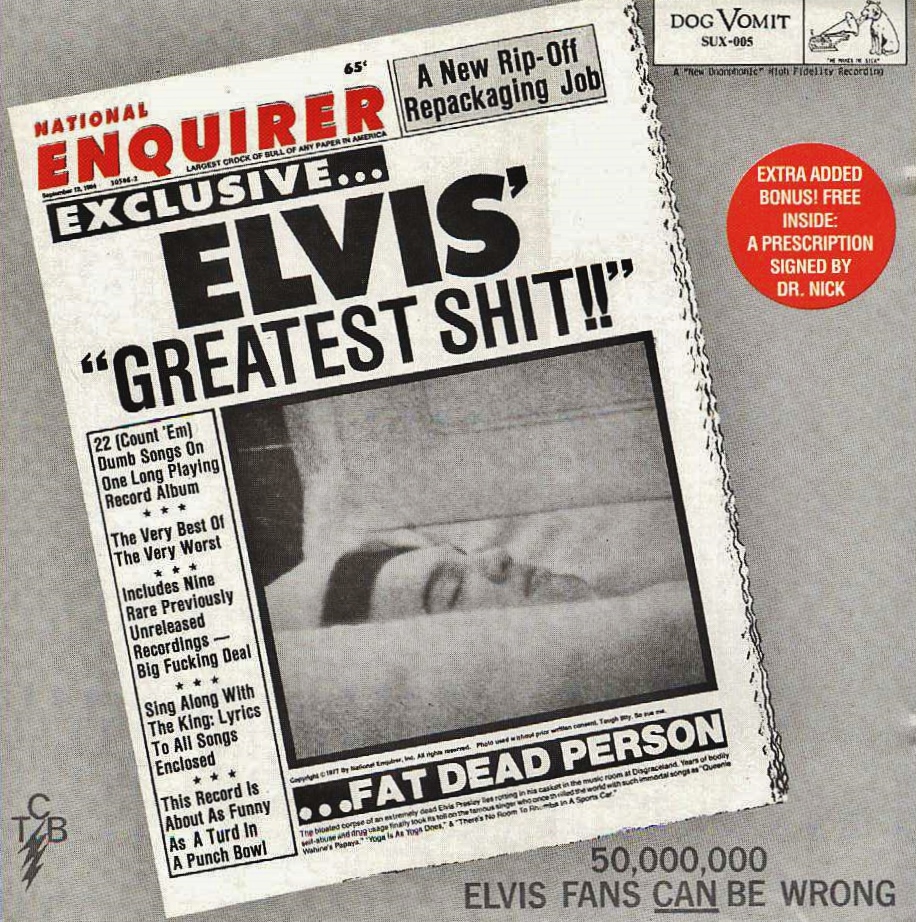 Let Yourself Go! features some mild cussing and anti-hero infamies (“Are you horrr-neee tonight,” Elvis hums between takes) among repeated tosses at cornball TV-special production fodder (“Little Egypt,” “Saved”). Its twilight counterpart would be Elvis’ Greatest Shit!!, whose centerpiece is an outtake of “I Can’t Help Falling in Love” ended with a testy “shit” and “hot damn tamale” from Elvis. Otherwise it is a grossly funny document steeped in waste, vomit, and disbelief. I.e., songs from Elvis’s movies: “There’s No Room to Rhumba in a Sportscar,” “Yoga is as Yoga Does,” “Songs of the Shrimp,” “The Bullfighter was a Lady,” “He’s Your Uncle Not Your Dad,” “Dominic the Impotent Bull,” “Queenie Wahine’s Papaya,” “Do the Clam.” The TV special’s modest ball of corn grows to horrific, planetary dimensions, multiplied as in the fevers of a hallucinogenic sequence out of “The Simpsons.” 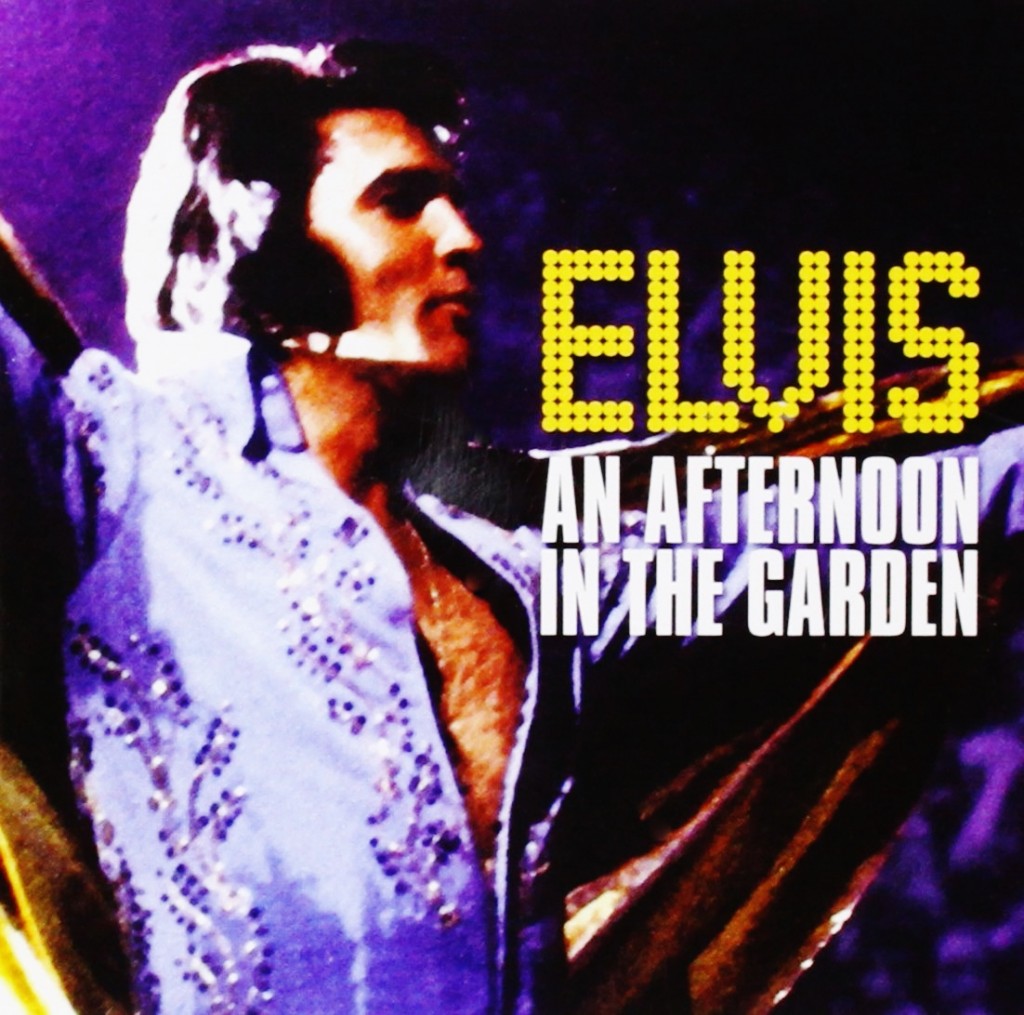 Elvis’s last run of real godhead, before the effects of overindulgence manifested in his appearance and performance, may have been his shows at New York’s Madison Square Garden in June 1972 — one of which is captured in full on An Afternoon in the Garden (1997). Robert Christgau and Jon Landau wrote powerful pieces about the transport of seeing Elvis in full flame at the Garden, cape flying and legs thrusting; George Harrison had a sweet moment somewhere in the Beatles Anthology DVD extras, describing meeting Elvis backstage, cringing like a lower creature before this towering, high-collared monument. (In the concerts, Elvis lightly rewrote “Never Been to Spain” to fit his own Fab-challenged trajectory through the Sixties: “But I kinda like the Beatles / So I headed to Las Vegas …”)

It’s a big show to listen to, with its own apotheosis of Olympian glitz — a crew of professionals raising professionalism to heroic heights — but there’s more than a dollop of the fakery that replaced drama with bombast and helped make Elvis a joke. And truth to speak, Elvis the hot-blooded, full-throated Garden god is actually no more committed to his mission of entertainment than is the near-dead sea-creature who liquefied the stage of Indianapolis’s Market Square Arena on June 26, 1977. This is the show captured on Adios: The Final Performance, a decent audience recording of a legendary moment of popular mortification: Elvis glazed, sweating, bulbous, beyond reclamation or excuse, unwittingly posing for all the photos that will be flashed worldwide less than two months later, when he is dead and every commentator will sagely nod, “Look: you could see it coming.” 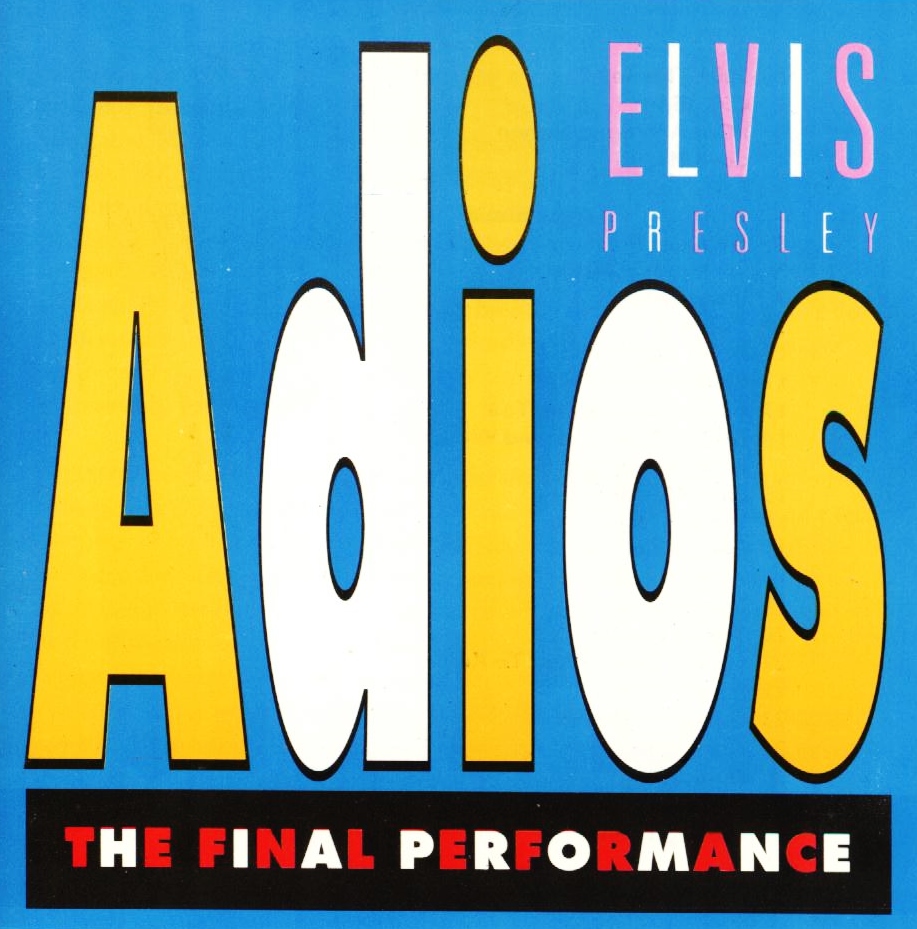 “Oh, Jesus,” you can hear an audience member cry as lights beam and anticipation builds, and Also Spake Zarathustra grips the crowd.

No one with a heart can hate Elvis. You have to feel affection even when he is basting in his own sad juices, flopping and flubbing and hugging death. Even when, from the Indianapolis stage, he drug-mumbles his lyrics and repeatedly transmits the patented Presleyan Well, well, welllllll like a sick whale moaning beneath great waves of delighted laughter. Because he’s still giving it all he’s got — as little as that might be — and he is doing it behind the nearest any star has ever come to the Janus faces of man and god. Was there ever a god who was less assuming, at least in public, more of a human?

Listen to those awful nautical moans from Indianapolis, repeated to the point of a trope. Listen to him slur, “What is today, Monday?” (“Sunday!” comes the mass response.) Listen to the trivial stage blabber he expended on all the identical audiences. In The Worst Rock ‘n’ Roll Records of All Time: A Fan’s Guide to the Stuff You Love to Hate! — love to love that exclamation mark! — Jimmy Guterman and Owen O’Donnell ranked Having Fun with Elvis on Stage (1974) as the, yes indeed, #1 worst album in the genre’s then-nearly-50-year-history. That placed it much higher, therefore much lower, than such mutant fetuses as Travolta Fever and Joey Bishop Sings Country Western. 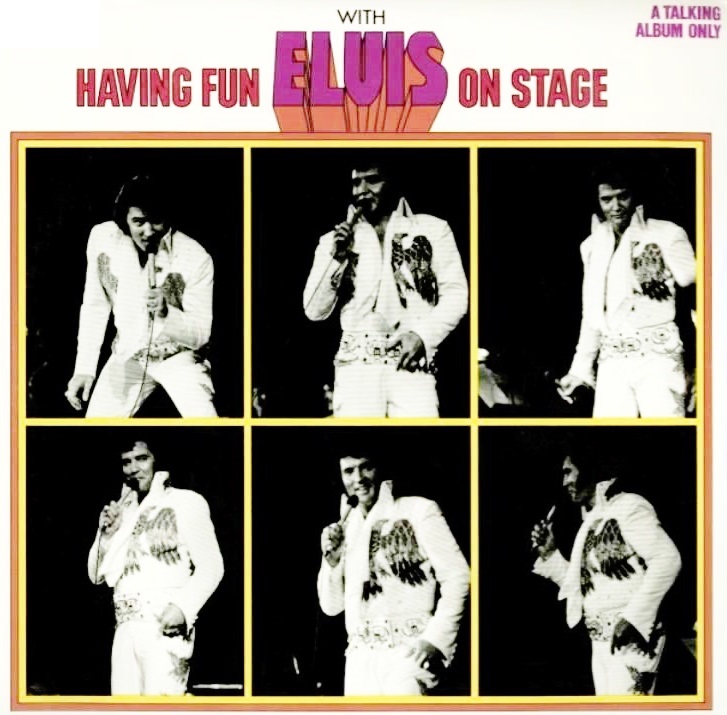 It’s not that bad. Granted that the two sides’ worth of Kingly chatter and patter, water-gulps and air-kisses feature nary a lick of music, but there’s Afternoon and others for that. Having Fun consists entirely of clips of a jovial demigod interacting with his female worshippers, making fun of himself, of them, of the whole crazy relationship, and generally behaving as if everyone in the house — himself not least of all — were, get this, average, ordinary human beings. You could say that was a lie (this is Elvis!), and you could say that was the most radical and affirmative onstage attitude for a megastar to adopt at a time when art-rock spectacle and arena-rock bombast were becoming the norm. 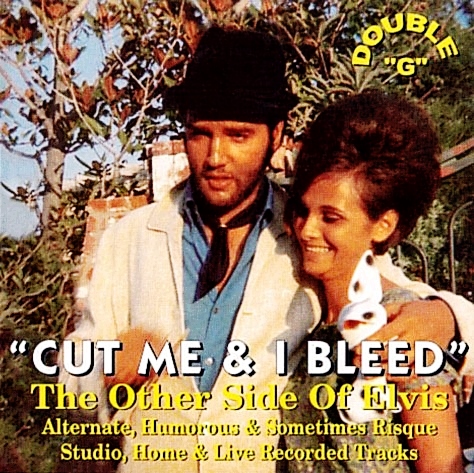 Having Fun is very much a G-rated version of the kind of thing you get on the arrestingly titled bootleg Cut Me and I Bleed, apparently a collection of every Presley swear ever caught on tape, including some reruns from Greatest Shit!!. It begins with Elvis reading “a poem that I wrote” to what sounds like a gaggle of typically sycophantic Memphis Mafiosi:

As I awoke this morning, when all sweet things are born,
A robin perched on my windowsill to greet the coming dawn.
He sang a song so sweetly, and paused for a moment’s lull.
I gently raised the window, and crushed its fucking skull.

(That poem was making the rounds when I was a kid. I don’t know who wrote it, but it weren’t Elvis.)

“Fucking skull” sets the tone, and Bleed bleeds it. The irony, or surprise, or payoff, to this pageant of profanity is that while it ostensibly shows Elvis screwing up and goofing off, it also features some of the strongest vocalizing of his career. “A Hundred Years from Now,” before it falls apart, has a startlingly beautiful, boyish vocal, full of breeze and hilltop, as if Elvis were Huck Finn again and the Colonel, the Army, the Mafia, and Hollywood had never happened. There are staggering versions of “Hurt” and “Stranger in My Own Home Town,” the latter a particularly vociferous take, as an angry Elvis departs the text and charges forth into improvised obscenity.

For the wind-up, we go live to Las Vegas. Gearing up for a big number, Elvis acknowledges shouts of love from the crowd. Then a high-pitched cry, tossed upward into the brief silence like a rotten lettuce:

“Fuck you,” the King answers without a pause. The crowd is joyous. And applause, deep applause, leads into a rousing “American Trilogy.”

Metaphor, thy name is Elvis.

But following that is something called “Drug Dialogue,” and an infamous tirade it is. Recorded September 2, 1974 — the last night of a two-week stand at the Vegas Hilton — it finds Elvis fulminating over a recent gossip item insinuating he was a junkie. Here it is, fully transcribed, though lacking the King’s savage cadence, his homicidal essence:

Well, I was — you know, in this day and time you can’t even get sick. You are STRUNG OUT. Well by God I’ll tell you something friend I have never been STRUNG OUT in my life, except on music. [applause]

When I got sick here in the hotel, I got sick here that one night, I had 102 temperature, they wouldn’t let me perform … Three different sources I heard, I was STRUNG OUT on heroin. I swear to God, hotel employees, Jack … bellboys … freaks that carry your luggage up to the room … people working around, you know, talkin’, maids … And I was sick, I was — you know, I was getting — had a doctor, had the flu, got over it one day and it was all right.

But all across this town, I was — I was STRUNG OUT. So I told ‘em earlier and don’t YOU get offended, ladies and gentlemen, I’m talking to SOMEBODY ELSE: if I find or hear the individual that has said that about me, I’m gonna break your goddamn neck YOU SON OF A BITCH. [applause] That is dangerous, that is damaging to myself, to my little daughter, to my father, to my friends, my doctor, to everybody in my relationship with you my relationship with you up here on the stage it is dangerous I WILL PULL YOUR GODDAMN TONGUE OUT BY THE ROOTS!! [applause]

Thank you very much. Anyway … How many of you saw the movie “Blue Hawaii”?

That’s no metaphor I can grab.