[Between October 2005 and June 2009, HiLobrow contributor Devin McKinney worked with intermittent perseverance and passion to record his reactions to music and music-related stimuli at a blog called Pop with a Shotgun. He has selected some of his favorite posts for this reprint series. This installment, originally posted July 1, 2006, is the second of ten.] 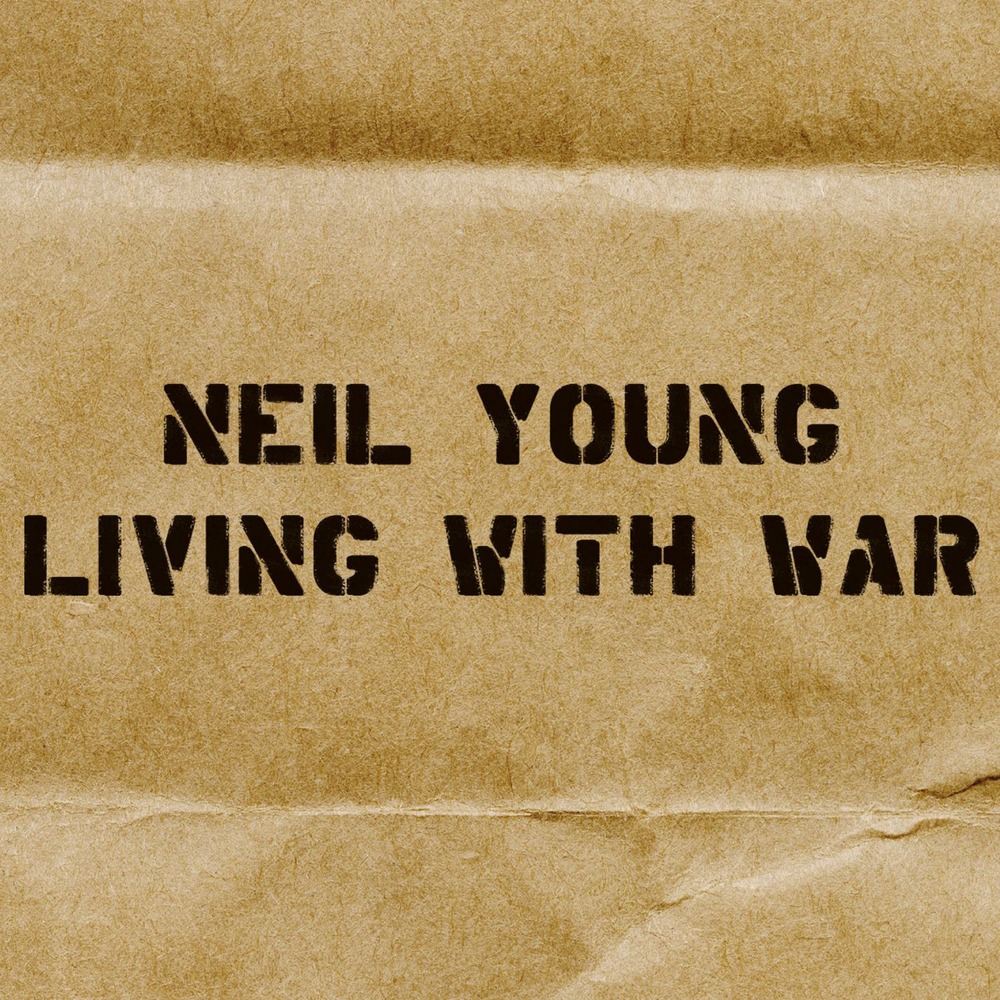 It took three listens to finally, fully confirm how loud this album sucked, how badly it blew. That it was one of the worst things Young had done in a genius career full of best things and worst things. That yes it was indeed down there in the depths with Trans or Landing on Water. It came packaged as a cardboard box wrapped in plain brown paper, title stamped in black stenciling — and that was appropriate, given that the goods inside were just that dumb and dimensionless, that repellently unengaging. By that third listen, not even the ghost of a doubt remained about how bad it was.

I don’t like it when Neil does this sort of chunky, block-rock style: it’s nothing new in the world, nor the return of anything good. But then, unlike most Neil fans, I detest “Rockin’ in the Free World” and don’t rate Everybody Knows This is Nowhere anywhere near the top.

Every song is Neil Young singing, or more commonly blaring, over the heavy lumber of a four-square, straight-face rock march. On almost every song, Neil is accompanied by a choir — black voices, white voices, presumably young and old alike, the True Collective Voice of America. This is an America I don’t want to live in: the same America that gives me commercials that offer endless credit debt as proof of patriotism, that have always featured the True Collective Voice of America singing lines like Raise your hand, raise your hand if you’re Sure! We’re not truly this stupid mobby mass clapping and braying as one. We don’t stand together in fields shilling for sodas or phone companies or fucking world peace.

The album’s one memorable hook, embedded in “Roger and Out,” is lifted from “Helpless,” while another song sounds like “Freedom.” More specific than that about the material’s pervading mediocrity and second-handedness I cannot be.

Don’t need no more lies! is the album’s catch-slogan, its rallying cry. Certainly we don’t, and Young is expressing, forthrightly and without equivocation, what a lot of Americans have believed for some time, and others are slowly but surely waking up to. But merely yelping it over and over isn’t doing an artist’s job. The artist’s job is to transform reality, turn over dirt, put a jack in the box, not just yelp a simplistic truth over and over.

Someone might say — let’s assume the straw man for a moment — that beauty and art are beside the point just now. That the war is the thing, Bush is the issue, and anything a musician with social goals might offer that distracts from that awareness is compromise. I don’t agree with our straw man. The only compromise an artist makes is when he allows issues to determine the limits of his expression. Would Stephen Colbert’s slow roasting of Bush at the White House Correspondents’ Dinner in April have been more effective if it had been less funny? Would anyone consider that Colbert had done his job as a political satirist if he had abrogated his first responsibility, which is to entertain?

And as for protest rock, I don’t know… if Iraq is the new Vietnam, which it most assuredly is, this may be the return of an old pop debate: how “artistic” can rock which wants to change society, change minds, afford to be? I’m not certain that’s a question artists should ever ask themselves, and I’m trying to verbalize something about how Living with War says what all us liberals believe but says it so baldly and stupidly that it’s actually counterproductive in a way. It doesn’t make me, as a supporter of its critique, feel better or stronger or angrier, or anything except headachey. Meanwhile, it’s certainly not going to turn anyone against Bush who hasn’t already been tipped that way by a dead son, or a brain-damaged husband, or a dip into the Abu Ghraib photo gallery, or rising gasoline prices. Whereas a protest album that had some beauty and tragedy and whimsy, in addition to (or instead of) squawking anger and chunky dumb-ass power chords, would give us all some sense of what would be lost if the Bushies really took over the world — which, according to the polls, they haven’t quite managed to do yet.

The last track is the choir singing “America the Beautiful.” Almost inevitably, it reminded me of the end of The Deer Hunter, the Vietnam vets, their friends and lovers singing “God Bless America.” In 1978, it was a controversial ending — God bless America indeed! How could the filmmakers sanction our Vietnam carnage with such a flag-waving affirmation? Bullshit. That ending had levels — not to mention missing legs and bullet holes and catatonia and impotence and misery and absence and finally just helpless tears. It’s difficult today to conceive that anyone could have taken it that straight: the absences are pretty much all you see, while affirmation dissolves in the empty chair, the silence that follows the singing.

Young’s “America the Beautiful,” though, is just what it says. And it’s as dull and empty of real affirmation — real nerves, real life, your life as a citizen, the life of your country — as Kate Smith sounded to Americans of Young’s generation. So it’s a fitting end, I must primly put it, for an album gripped to death and beyond by musical complacency, moral certainty, and just plain bad songs.