[Between October 2005 and June 2009, HiLobrow contributor Devin McKinney worked with intermittent perseverance and passion to record his reactions to music and music-related stimuli at a blog called Pop with a Shotgun. He has selected some of his favorite posts for this reprint series. This installment, originally posted January 9, 2006, is the first of ten.] 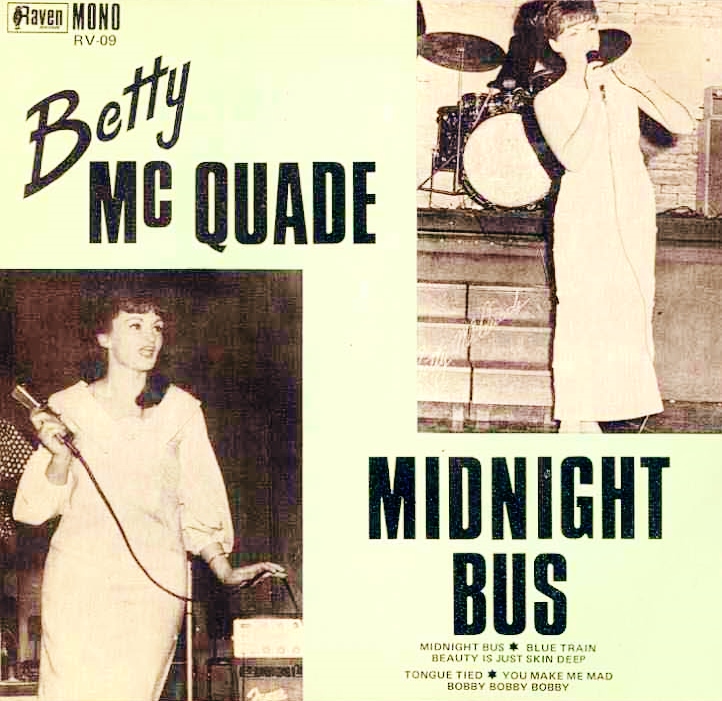 The Internet is what radio used to be — at least in this sense: surfing the audio blogs has become what surfing the radio dial used to be. (Though for those of us who grew up in tiny markets with one Top 40 pop outlet, the experience of dial-spinning was more akin to splashing in a tub than shooting the curl.) Make the rounds of your bookmarked sites and you’re bound to come across buried treasure — a song here or there that comes out of nowhere, for which “nowhere” seems the only conceivable provenance, and the only appropriate destination.

Betty McQuade’s “Midnight Bus,” which I discovered the other night over at Planet Xtabay [Now defunct. – DM], is one of those. Intrigued by the brief note attached to the mp3, I tuned in with one radio knob (metaphorically) and nudged the volume with the other (literally). I knew the name of neither song nor singer. It was instantly recognizable as something I had never heard before. McQuade’s voice was unassuming and rough, shaken somehow, as it sang of her baby’s sudden disappearance on the nocturnal conveyance of the title. Behind her came, at regular intervals, tinny, tremulous strikes on a distant surf guitar. Once or twice the timber of the instruments hardened and built to a near-climax. Both times they settled back and held to the slow and sad. McQuade sang, “I’m alone. I’m alone. I’m alone.” The record ended.

It had the slightly muffled sound and lonesome echo that placed it as post-Elvis, pre-Beatles pop. I could see Buddy Holly making it. But that was as far as I could go in figuring out what it was. The little flute whistling up in the spaces between Betty’s lines confused me — that was an unusual instrument in the days before flower pop, Association, Moody Blues, etc. — as did the workaday melancholy of the presentation, its honesty in being a small record by a small voice, as if it knew it would never be heard by millions. The other confusing thing was the melody, which I wracked my brain over before realizing it was largely identical to the Everly Brothers’ 1958 hit “Problems,” penned by Boudeleaux & Bryant, a fast-paced teenage lament — and, aside from its strict arrangement of notes on staves, an emotional world away from the dingy apartment, Greyhound station, and dead-end street of McQuade’s Lonesome Town. Still, had “Midnight Bus” come before or after “Problems”? Who’d copped what from whom? What was this song, and where had it come from?

See, just the questions the radio used to make you ask. You’d hear a song over unpredictable airwaves somewhere past the edge of night, and it would be the one song the DJ didn’t announce. What was that? Did I hear it? Did I dream it? You’d spend years asking, questing, listening, searching, hunting high and low for that sound. If you were a kid in those days before worldwide webbing, a minor without recourse or resource, you were stuck with your fantasy, your exquisite frustration, that tantalizing taste on your tongue that might never return. But this is today: anyone with access to Google has legions of researchers on perpetual unpaid retainer. What are you gonna do, not find out? As Dave Marsh once wrote — with apologies to the women out there, this means you too — “We’re men, not dogs, and when we find a mystery, our job is to solve it, not roll around in it.”

“Midnight Bus” was penned by the once fairly well-known John D. Loudermilk, writer of such perennials and fondly-recalleds as “Tobacco Road,” “Ebony Eyes” (those Everlys again), “Then You Can Tell Me Goodbye,” “Torture” (memorable accompaniment to the Scorpio Rising mustard orgy), “Sunglasses” (an oldie I first heard through the good offices of Tracy Ullman — see her album You Broke My Heart in 17 Places), and the original version of the Raiders’ “Indian Reservation” — called “Pale-Faced Indian” in its 1960 incarnation, by Cherokee singer Marvin Rainwater. (Thanks to Kees van der Hoeven, keeper of what must be the ultimate John D. Loudermilk site, for this info.)

The song had been recorded by others, including Loudermilk himself, before being rendered definitively by the Scottish-born, Australia-emigrating McQuade. Her version was recorded in Melbourne in 1961, and backed up by local band the Thunderbirds. It was another four years before it became a huge hit — in the land down under, if nowhere else. According to van der Hoeven, “the song was eventually voted #1 Rock song of the 20th century in Australia!”

I don’t know if I’d go that far. But I listened to “Midnight Bus” again just now, and as yet its lonesomeness is not assuaged by all I’ve learned about it. Its essential unplaceability and oddity are not niched or squared by a bit of historical context, not centered or solidified by faces and names or dates and places. It’s still weird. I think it’s a classic. It’s my #1 Rock song of the past weekend.

So there’s your back-story. If the Internet is like the radio — which it is, or can be, or ought to be, or maybe I just want it to be — it’s radio with a research library built in. And research has a way sometimes of taking more away from an experience than it gives. Who will say whether an eerie little midnight record like this one, found by accident, a ghost of a thing at the dark end of a cyber-corridor, can stand up under all that information? Who will say it’s not better that it should recede in the memory, be lost again in the vortices between airwaves as they come and go?

ALL POSTS IN THIS SERIES
*