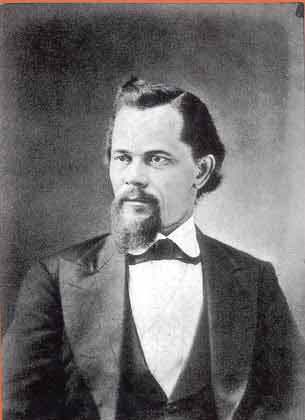 In my perfect occult America, next February’s Black History Month would be devoted to a celebration of the life and times of the single most influential nineteenth-century black man whose name remains as yet unhallowed in the pop Olympus of American multicultural memory. The man is the medical doctor, trance medium, and occult author PASCHAL BEVERLY RANDOLPH (1825–75), and such a memorial seems exceptionally unlikely, since it would require scrying mirrors, bowls of hashish, magnetic elixirs, and, most importantly, reverential acts of mutually satisfying mystic sex. Indeed, it is precisely in his advocacy of the “White Magick of Love” that Randolph’s importance lies. Based on secrets he claimed to have discovered during his wide travels in the Orient, Randolph’s “Anseiratic Mysteries” planted ideas and protocols that would later flower in occult orders like the OTO, founded by Theodor Reuss and transformed by Aleister Crowley into sex magick central. Indeed, we hear more than a little of the Beast’s famous later motto in Randolph’s precept “Will reigns Omnipotent; Love lieth at the Foundation.” But in many ways Randolph, an ardent Abolitionist, was the more progressive figure — unlike Eastern Tantrics and Crowleyian sex magicians, he insisted on the necessary orgasmic mutuality of the “nuptive moment.” Randolph’s advocacy of erotic healing drew the ire of the Theosophist Madame Blavatsky, though it did not help that Randolph was also, as he said, a “tawny student of Esoterics.” Randolph was high yellow, the child of a Virginia plantation owner and a part-Malagasy mom, and it was important to Randolph that he did not have slave blood. Though he did not have much truck with the rootwork and hoodoo that constituted the central current of African-American magic in his day, he did however market a “New Orleans Magnetic Pillow:” a love charm with lodestones and magnetic sand.

On his or her birthday, HiLobrow irregularly pays tribute to one of our high-, low-, no-, or hilobrow heroes. Also born this date: Frank Herbert.