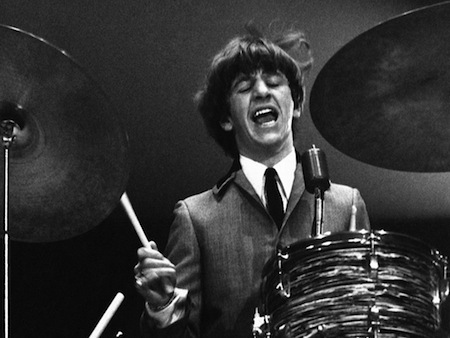 RINGO STARR (born 1940) has always known how good he is — Mark Lewisohn’s Tune In amply documents his status as Liverpool’s top stick man — which makes his humbleness in the spotlight all the more admirable, and comical. He’d sit patiently and blow cigarette smoke and laugh at John’s puns just like any other guy, but he served the Beatles’ music with unfaltering skill, imagination, and sense of the whole, carrying their global dominance and universal appeal not like Atlas hoisting the earth but like a boy blowing a feather to keep it aloft.

Hitting stride with the increasingly active, agitated rhythms of 1965–66 (“Ticket to Ride,” “Wait,” “Day Tripper,” “The Word,” “Rain,” “Taxman,” “She Said She Said,” “Strawberry Fields Forever”), Ringo created on January 19, 1967, what may be the finest drumming in pop music. Listen again to “A Day in the Life,” to the cymbal plashes like breaths of the reaper, to the clustered beats shuffling up fast behind the vocal lines, each one increasing in weight and threat, hastening the song’s benumbed wanderer to his doom. To me those drums have always been the sound of Death itself, and maybe another drummer could have produced them, but I don’t hear them coming from anyone but Ringo — the only Beatle who grew up truly poor, who twice shook hands with death before leaving his teens, who never made a show of his deprivation as a child of war and want and sickness but always accepted gracefully the gifts bestowed by talent and timing — two intangibles of which he is master.

On his or her birthday, HiLobrow irregularly pays tribute to one of our high-, low-, no-, or hilobrow heroes. Also born this date: Marc Chagall, Felicien Rops, Hank Mobley, Robert A. Heinlein.