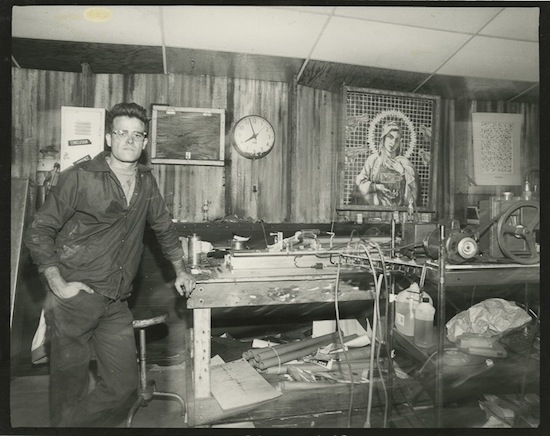 The first step towards liberating machines from convention is to recognize that “mechanistic” values like efficiency, productivity, and control are not, in themselves, a necessary part of technological expression. Machines — not algorithms now, but organized three-dimensional assemblages of engineered parts that exploit physical law — can also be absurd, surprising, ridiculous, sublime. MARK PAULINE (born 1953), the founder and mastermind behind Survival Research Labs, forged this liberating realization into brazen, nerve-wracking industrial performance art. Loosely orchestrating the interaction of a menagerie of robot monsters, errant machines, and chaotic special effects, Pauline and crew staged thrilling spectacles whose Mad Max mayhem also functioned — for those with ears to hear — as prophetic interventions into what Deleuze and Guattari called “the machinic phylum.” Not unlike the way that their kustom kulture forbears reframed the car, SRL transformed robots into vectors of an expressive, sensation-driven, and anti-elitist subculture — in this case, the same sort of post-punk anarcho-industrial underground that marked West Coast developments like ReSearch and early Burning Man. But Pauline also wanted to give machines a life of their own, and he did so by cultivating feral collectives — both his own crew of mad scientist engineers and the distributed spontaneity of the performances themselves, whose crunching gladiatorial combats anticipated the now widespread (but far tamer) culture of Robot Wars, Battlebots and RoboGames. The visceral and occasionally significant danger of SRL shows was, in this sense, not just a stunt — it was also an aesthetic and technological wager, a throw of dice that only machines could read.

On his or her birthday, HiLobrow irregularly pays tribute to one of our high-, low-, no-, or hilobrow heroes. Also born this date: Tycho Brahe, Jack Cole, Shirley Jackson, Lester Bangs.