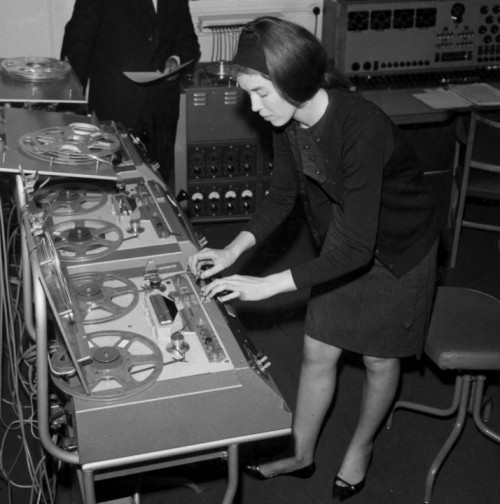 “I’ve always been a very independent thinker,” explained visionary electronic composer DELIA DERBYSHIRE (1937-2001). “But I must say that I go back to first principles… I go back to the Greeks.” Growing up in Coventry, where her father was an automobile sheet metal worker, Derbyshire attended the Barr Hill School for Girls before a math scholarship took her to Grifton College, Cambridge. Already an accomplished pianist, Derbyshire studied music there, graduating in 1959, the same year Decca Records told her they don’t employ women in the studio. Two years later, however, the BBC hired Derbyshire as studio trainee and, though the skills she learned were invaluable, in 1962 she transferred to the BBC Radiophonic Workshop at Maida Vale, where radio and television sound effects were created with magnetic tape, electronics and individual ingenuity. In 1963, Derbyshire got the assignment that would assure her renown. “Did I really write this?” an astonished Ronald Grainer asked Derbyshire upon hearing her orchestration of his theme for Dr. Who. “Most of it,” she replied. Among her hundreds of other works, two are especially interesting: her collaboration composer Roberto Gerhard on Anger of Achilles (1965), with Homeric text by Robert Graves, and the boggling hymn, “Zwizih Zwizih” (1968). “I think this was the climax of a science fiction play called The Prophet,” she recalled for BBC Radio Scotland. “It ended up with all these robots and they sang a song of praise to this bloke, presumably the prophet, and this was the song they sang.”

On his or her birthday, HiLobrow irregularly pays tribute to one of our high-, low-, no-, or hilobrow heroes. Also born this date: Soren Kierkegaard, Tammy Wynette, Miklos Radnoti.