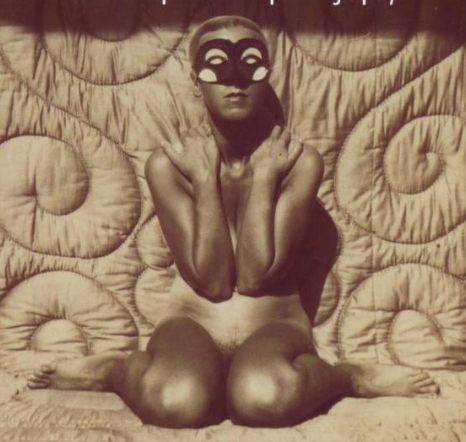 I knew CLAUDE CAHUN’s (Lucy Schwob, 1894–1954) story long before I’d heard of her, because I’d read Alan Moore’s V for Vendetta. (I’ve never heard Moore cite Cahun as the inspiration for his comic, but doesn’t it seem likely that he would know an obscure nugget of British history about a forgotten lesbian surrealist artist imprisoned by Nazis?) Cahun was born in Nantes; as a teen, she fell in love with her step-sister, Suzanne Malherbe, who became her lifelong lover and artistic collaborator. Taking the gender-ambiguous name “Claude Cahun” she and Suzanne began shooting self-portraits that poked at questions of gender and identity with great wit and playfulness. In Paris, Cahun became involved with the Surrealists; when France fell, Claude and Suzanne moved to the island of Jersey. Jersey was then occupied by German forces, so the two surrealists used art to subvert fascism — they cut up BBC newsbriefs into rearranged poetry, and slipped these pamphlets into German soldiers’ pockets. Captured and sentenced to death, at the last minute — like Alan Moore’s Valerie — they were released without explanation. Her work, which anticipates artists like Cindy Sherman, is far more than a footnote to V for Vendetta… but next time you see a Guy Fawkes mask at an Occupy rally, spare a thought for Claude Cahun: “Under this mask,/another mask. I will never be/finished removing/all these faces.”

On his or her birthday, HiLobrow irregularly pays tribute to one of our high-, low-, no-, or hilobrow heroes. Also born this date: Pablo Picasso.