Today’s topic is networks. Allow me to introduce you to our special guest, the osprey. 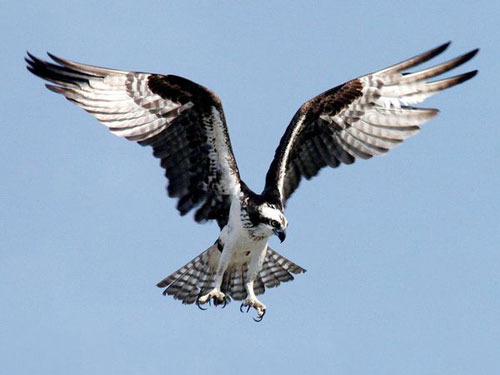 The osprey, also know as the sea hawk or fish hawk, is a dramatic-looking raptor with a wingspan of up to 6 feet, which cruises coastlines for noms and nests. Once decimated by DDT, osprey populations have rebounded and, even if you have not seen one of the birds, you may have spotted a nest, a large, flattish pile of sticks at the very top of the tallest platform available.

DDT was a field lesson in negative network effect: it bioaccumulates up the food chain, so that while it was targeted towards insects, the fish and small birds that ate them accumulated the toxins in their tissues, and the larger fish, mammals and larger birds that ate them accumulated even more toxins, and so on, and so on, all the way up. At the top of the chain were the raptors, fierce predators that turned out to be extremely vulnerable to the pesticide’s accumulated effects. Osprey and other hawk and eagle populations, including our national bird, the American Bald Eagle, were decimated. But since DDT was banned 4 decades ago, once-endangered raptors have been making a slow but steady comeback, their nests, eggs, feathers, and persons protected by law.

And where those persons, feathers, and eggs have lately chosen to nest is the top of cell towers. 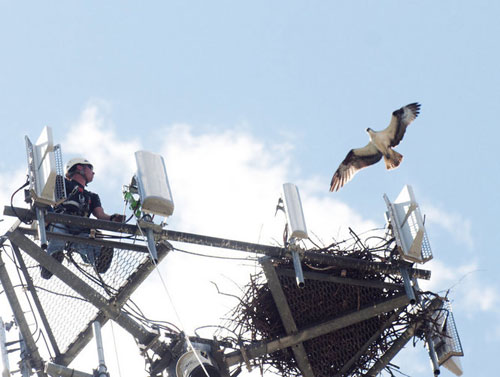 The post-Fordist holy grail of always-everywhere-hyper-connectedness (always on, always working) seems almost within our anxious grasp. A seamless experience, featuring swiping between multiple devices and and cross-fading to various interchangeable world cities, mobile communication is poised to further function, subsuming scattered individuals into an oceanic one-ness of virtual currency, technophilia, and outsourced IT.

But despite the impressively dense coverage maps brandished in ISP ads, there’s still plenty of signal dropout. Even if you switch providers. Even if you have 3G. Or 4G. Even if you have the latest iDevice, or its current competitor. Perhaps you’ve resigned yourself to taking all your calls wandering around the parking lot, dodging leaf-blowers, pickups, and rain. The grail proves elusive; our network clearly needs improvement.

It turns out that ospreys, survivors of a dangerous network cascade themselves, may be able to speak to that issue. They’re… part of the problem. 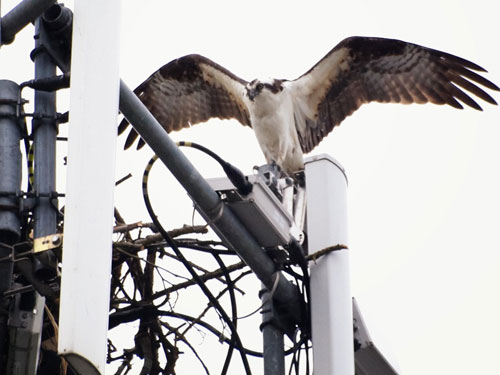 Ospreys have targeted cellphone towers as their optimal nesting grounds. In communities across the country, ospreys are found perching at the top of towers, gathering sticks and settling in. And neither stick (removal) nor carrot (specially-built osprey platforms) has proved a consistent enticement; after this year’s chicks have launched, the parents will return to reoccupy the same tower next year.

The big fish-eating raptors favor high perches with a clear approach — exactly what network engineers look for when putting up cellular sites. Throw in a flat top surrounded by railings, a typical design for cell towers, and you’ve got what looks like “nirvana to an osprey,” said Eric Stiles, head of the New Jersey Audubon Society.

In Florida, Bechtel estimates that 45% of the cell towers have osprey nests. ISPs opine for a technological solution, or, any solution, but a solution is not yet in sight.

Bechtel puts up nets to keep ospreys away, but the persistent nesters just build on top of them. PacifiCorp tries to lure the birds away from their existing nesting sites by building nesting platforms. It uses old power poles and asks local Boy Scouts, as part of their Eagle Scout certification program, to build the plywood platforms. A PacifiCorp spokesman says the company builds about 50 a year. New Jersey issued its own guidelines earlier this year for dealing with nests on cell towers. Kathy Clark, a biologist overseeing the program at the New Jersey Division of Fish and Wildlife, says companies should pair deterrents on their towers with alternative sites for nests. None of it works.

So let’s run a thought experiment. What if, instead of trying to beat them, we join them? Ideally, networks should be flexible, not static; nodes variable, not fixed. The ospreys do offer a technology challenge, but perhaps one of synergy rather than deterrence. Idea: let’s develop tiny boosters that can be tagged to a leg, allowing the birds to nest, and roam, distributing the signal far afield. Free-G roaming hotspots! By tapping the once and future wireless web of life.