Back to school! This coming week, HILOBROW will publish a series — written by our friend and contributor Greg Rowland, and illustrated by our friend and contributor Joe Alterio — of alphabetical rhymes, for kiddies, about capital-T Theory. Rowland has been threatening to write an ABCs of Theory for years… so we told him to put up or shut up. Thankfully, he put up. Here is his introduction. 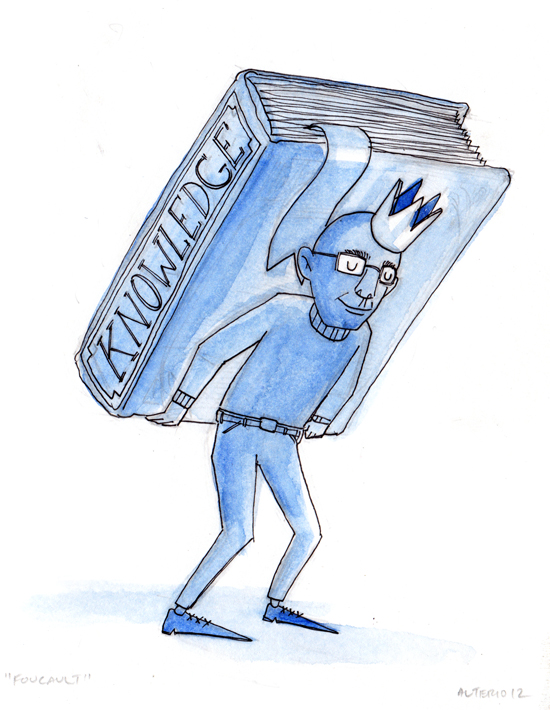 Walk into any Kindergarten and you will bear witness to a sand box, a swing, a toy car, a battered dolly, a wet play area and a panoply of reactionary picture books, groaning under the weight of their hegemonic spite.

So we must surely take heed of Lenin’s words when he asked “What is to be done”? (I strongly dispute recent research that claims Lenin asked this question of a waitress at a St. Petersburg cafe when his Beef Stroganoff included an excess of boiled beetroot slices.)

Hence I have constructed a radical counter-blast to the pervasive neo-fascism of the play group. This coming week, comrades, we are launching a seven-day induction into critical theory, thus leaving children equipped to challenge the dehumanising practices of the Kindergarten Konvention.

Read these poems to your children. Ensure that your comrades and acquaintances do the same, or if not, denounce them as Fellow Travellers. Above all campaign, by any means necessary, for the print publication of this opus along with a monetary advance that adequately reflects the agonies of my genius in forging these poems of radicalism, hope and complete pointlessness.