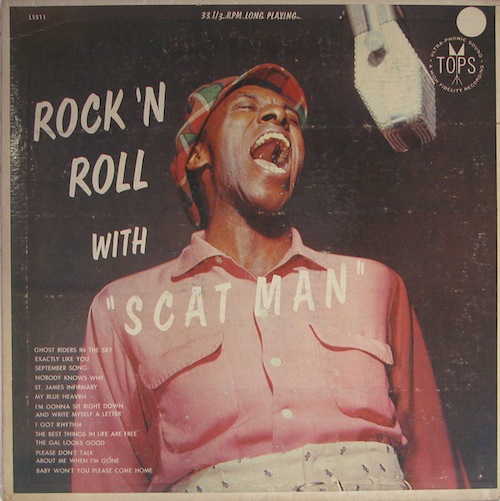 Musician, comedian, actor, icon: “SCATMAN” CROTHERS (Benjamin Sherman Crothers, 1911-86) was the irrepressible embodiment of America’s racial ambiguities, contradictions and yes, its glories too. Crothers began his career as a singer in Terre Haute, Indiana where he’d meet Al Capone and John Dillinger (“If you shined [his] shoes for a dime he’d give you fifty cents and let you keep the change”); in 1937, Crothers met his lifelong wife, a white Ohioan named Helen Sullivan. The Chicago jazz scene followed, then west, where Crothers drummed for jive genius Slim Gaillard before going solo again. Post-war California really was golden: radio, television, a 1950 hit song (“Chattanoogie Shoe Shine Boy”) with white bandleader Phil Harris, movies, including the important blackface minstrel picture, Yes Sir, Mr. Bones (1951). Did race matter? In late 1955, Crothers, under the faux-group name “The Ramparts,” recorded “The Death Of Emmett Till,” written by black Angeleno Mrs. A.C. Bilbrew and released on the black-owned Dootone label. In 1970, Crothers’ role in Roger Corman’s Bloody Mama prefaced a decade of notable film appearances — including Ralph Bakshi’s trickster masterpiece, Coonskin (1975, below) and Stanley Kubrick’s The Shining (1980). In between, Crothers could voice Meadowlark Lemon (of the Harlem Globetrotters cartoon series) one year (1970-1971), perform for President Nixon and friends at San Clemente the next and, in January 1975, swap bars of “All Of Me” with fellow subversive Redd Foxx (below). How’d he do it? Perhaps Crothers’ two custom license plates explain: “BLESSD” and “I LUV ALL.”

COONSKIN
ALL OF ME

On his or her birthday, HiLobrow irregularly pays tribute to one of our high-, low-, no-, or hilobrow heroes. Also born this date: Hergé, Robert Moog, Ruth Underwood.