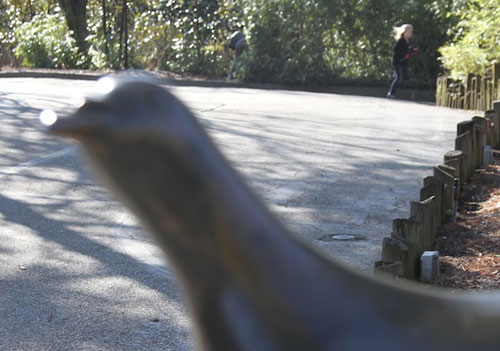 Just prior to last week’s SXSW experiment, I headed to the Cincinnati Zoo, about a half mile from my house, to find the place where Martha the last passenger pigeon took her dying breath. Hurrying to Wings of the World, on the far side of Swan Lake and the Gibbon Islands, I scanned for the memorial, knowing it to be a bronze statue of an alert Martha. Not immediately seeing it, I reopened the paper map, wondering whether the statue had somehow followed a path similar to its model’s. Of course the birds aren’t where they used to be, and the passenger pigeon memorial sits at the zoo’s opposite corner. I made my way around the zoo’s perimeter, encountering a swimming polar bear looking awfully resigned amid the sunny Cincinnati greenery. 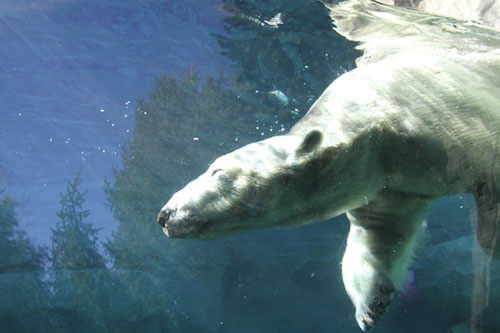 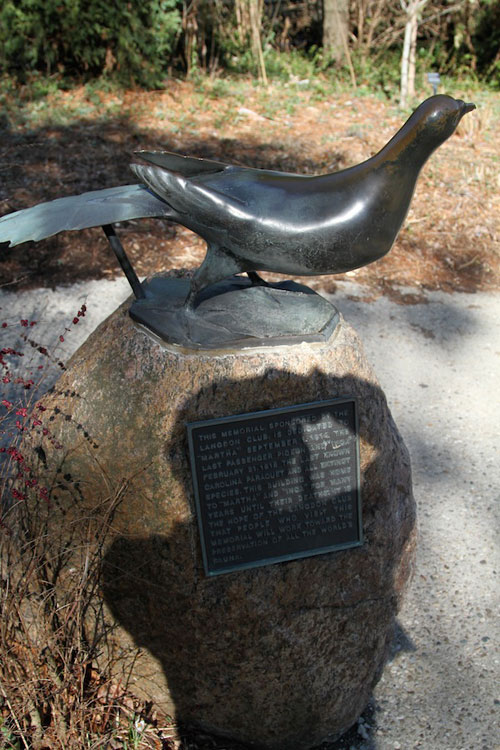 Soon the curvy bronze of an inquisitive bird on a stone base appeared, inviting pedestrians into the Asian-roofed hut fifty feet off the main walk. Entering Martha’s dim space felt like the discovery of a secret room. Brown on cream calligraphy theorizes the comparative value of art and living things. It’s possible that nobody had seen these walls in years; they smelled and looked like a grandparent’s closet. People go to the zoo to see living animals. 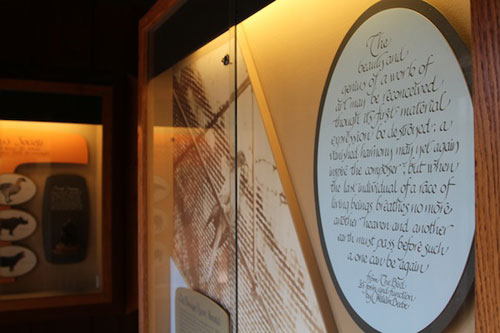 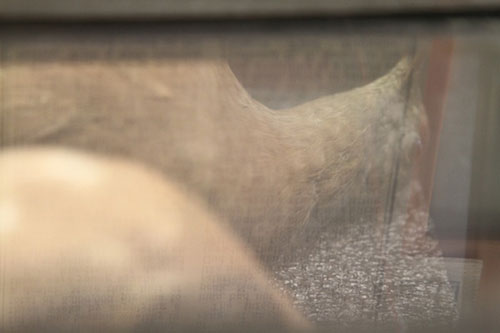 Display cases offer yellow newspaper clippings and arguments for preservation. An ink drawing depicts clouds of pigeons in the sky with eager guns in profile pointed their way. One foregrounded figure stands apart, directly facing us, eyes down, mustachioed mouth firmly gripping the long barrel of his weapon. Probably if I researched this, I’d learn that he’s cleaning out residue and preparing another shot, but I prefer to believe that he’s ending it, offing himself for communal sins, blowing a double hit of buckshot through his head in protest. Or perhaps he’s simply been driven mad by the enormity of the task… that’s a lot of birds up there, and it’s hard playing god. 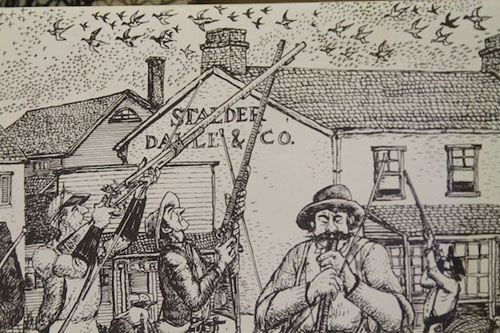 Who knows what Martha’s friends considered most remarkable about her? She may have possessed a subtlety of expression that humbled thousands. Certainly the weight of her death consolidates the potential for multiple histories, but then how many stories derive their narrative force from an inevitable conclusion? And apparently we take no less pleasure for awareness of the end. Bresson, et al. knew what they were doing.

On the way from Cincinnati to Austin shortly after my zoo outing (and thanks largely to the United/Continental merger), I found myself between terminals at O’Hare. The tiny pattern of ads adorning the escalator handrails gave them a resemblance to film reels, functionally passing through space, unreadable unless you submitted yourself and moved with them. 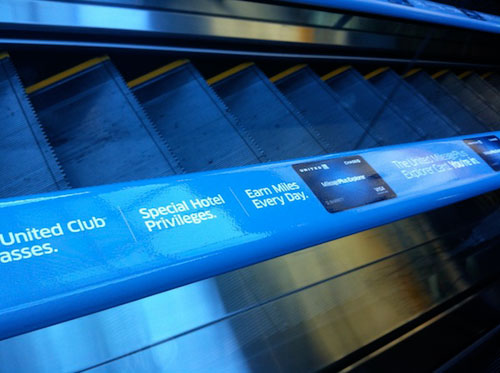 Underground, the moving sidewalk’s handrail remains black and undecorated; I decided to temporarily claim the site of a future ad, placing my phone on the horizontal surface and hitting the illustrated representation of a red button. The mirrored ceiling, neon tubes, and Gershwin are happy accidents:

If there’s anything narratively compelling in that, it’s the knowledge that an event is set to take place. Moving sidewalks end, and they assume point A, point B, and intentional travel between them. But of course it’s all context; rip out that sidewalk, shorten it up, throw it on the third floor of an Urban Active, face the other direction, and you’ve got a treadmill, the embodied metaphor for going nowhere at all.

Which brings us back to playing god. On March 5th, Boston Dynamics and the US Defense Advanced Research Projects Agency (DARPA) released a video of their latest robotic creation, the ambitiously-named “Cheetah.” As of this writing, the video is approaching 3 million views.

It’s not hard to envision a near-future where Cheetah will run much faster than 18 mph and sport a way cooler logo (Cheetos, anyone?)… its great-grandchildren may very well hunt down yours. You can imagine that chopping horror, those razor legs, haunting the evernight dreams of resistance children in 2062.

But here we witness Cheetah’s birth, playfully bouncing along at 2.5 mph, in full stride at 10 mph, really working at 12.5 mph, hunkering down at 14.5 mph, and then, speed indicator won over to Cheetah’s orange gradient font at 18.0 mph, just blowing us away with its churning hind leg flexibility. The nice people at DARPA give us a zoomed slo-mo sample to fully appreciate Cheetah’s technical wonder. And no matter your politics, isn’t there that moment at 0:32 where Cheetah sinks and nearly stumbles into a mess of steel and tubes and you feel yourself lurching forward, willing it to stay up? You stop wondering why Cheetah is running or where it’s going. It feels like Cheetah is running for its life, and who are we to blame it? It makes a good story.