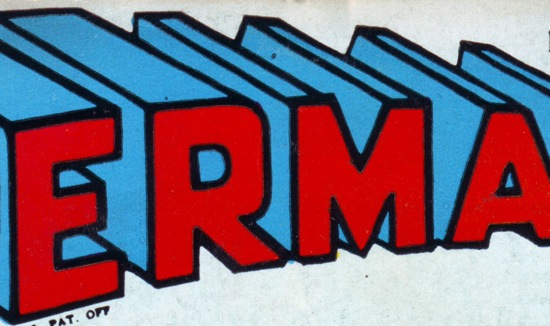 ABLE TO STOP MISCHIEF WITH A SINGLE WORD.
PREVIOUS

In the course of his recent research into comic book mastheads, John Hilgart has discovered a motley crew of what he calls “implicit superheroes” — superheroes who were there, all along, in our comic books… if only we’d noticed them. Like a sculptor who sees a sculpture implicit in a block of stone, he is now chipping them free of their prisons. Whether or not this is a good idea remains to be seen.

In fact, Hilgart has discovered so many of these there-but-not-there heroes that he’s announced the formation of… yes, The League of Implicit Superheroes. Erma is the eighth of the League’s ten members.

A series by John Hilgart, creator of the comic-book detail galleries Comic Book Cartography and 4CP. Check out his latest project: Supertype!