A Cock and Bull Contest

Is marbled the new black? 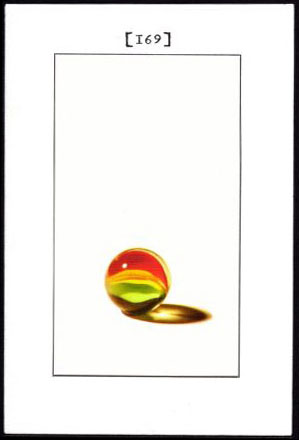 The Laurence Sterne Trust has been known to sponsor the odd auction. In 2009 they asked various artists to contribute a reinterpretation of the infamous “black page” in Tristram Shandy. Any image was fine so long as it was black. 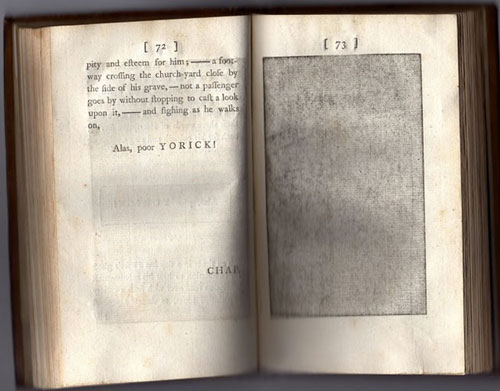 Now, following the progression of the pages as well as of the culture, the Trust has asked 169 artists (and writers, and “master marblers”) to contribute their version of Sterne’s “emblem of myself,” the marbled endpaper that escaped and found itself in the middle of Vol. III. 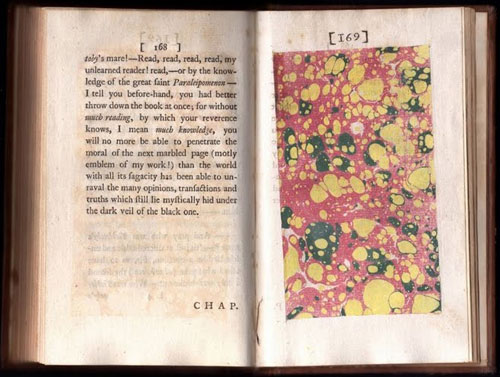 There’s certainly much to be said with black, as makers as diverse as Guy Debord, Chris Marker and Michael Winterbottom would attest; to say nothing of Mark Rothko. But with marbling, the interpretations can perhaps range more widely over the heartbroken expressions of our (end)times.

Sterne’s marbled page is not only a meta-fictional intervention on the part of the author into his story, it’s a meta-fictional intervention on the part of a particular publication process, and its materiality, into the story. Yes, I mean a book. After all, we don’t need endpapers on the Kindle, either within the story or as a wrapper. At any rate, we don’t get them. 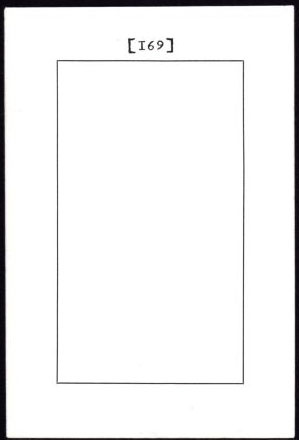 But what do we get? Or, what can we get? What is your emblem of yourself, do you contain contradictions? Are you perhaps collaged together from them? 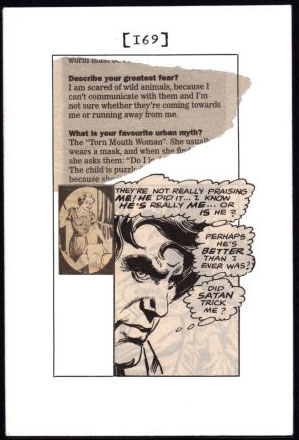 HiLobrow opens up our version of the contest to you: what would be your meta-fictional intervention into the story? Or that of your chosen medium or publication/promotional process? In this we will not limit you to text or its absence, two dimensions, or static imagery. Your contribution might be a short video, a sound piece, or your $1 short story from your ‘local’ ebookshelf. It could be an invoice. It could be an image. 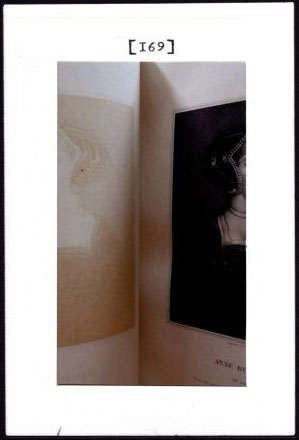 It could even be something black.

And of course it need not be from you qua you. Here, perhaps, is Tyler Durden’s contribution:

The contest is open to all HiLobrow readers and contributors. To participate, send us a link, or send your submission as an attachment, to hilobrow at gmail dot com. Submissions will be featured in an upcoming post.