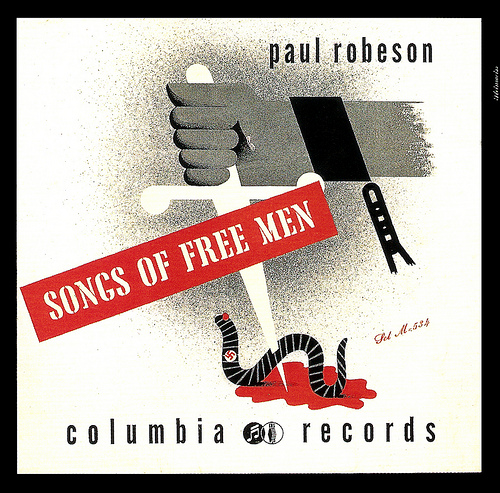 “I have been impressed with Robeson, who made me realize middle class America as no one else had made me see it,” wrote Gertrude Stein to Carl Van Vechten in 1929. Stein wasn’t the only one PAUL ROBESON (1898-1976) so affected — the athlete, singer, actor and activist inspired millions, including Eugene O’Neill (All God’s Chillun Got Wings) and Jerome Kern (Showboat). It’s not entirely obvious from his films but make no mistake: Robeson was a phenomenal musician — listen to his 1942 recording of Marc Blitzstein’s “Purest Kind Of A Guy” (below); the Popular Front had soul power! After World War II, with the second Red Scare in ascendance, the former track star ran into trouble. In April 1949, newspapers reported that, while on tour in Europe, Robeson, told an interviewer American blacks “would not fight for their country against the Soviet Union.” It was a statement of frustration and tragic ignorance both. Seizing the moment, the House Un-American Activities Committee asked Brooklyn Dodger Jackie Robinson to explain it to them which, on July 18 in Washington D.C., he warily did. “A lot of people try to pretend that the issue [of racial discrimination] is a creation of Communist imaginations,” the all-star second baseman said. “I can’t speak for 15 million [negroes], but I’ve got too much invested for my wife, my child, and myself in the future of this country to throw it all away for a siren song sung in bass.”

On his or her birthday, HiLobrow irregularly pays tribute to one of our high-, low-, no-, or hilobrow heroes. Also born this date: Valerie Solanas.