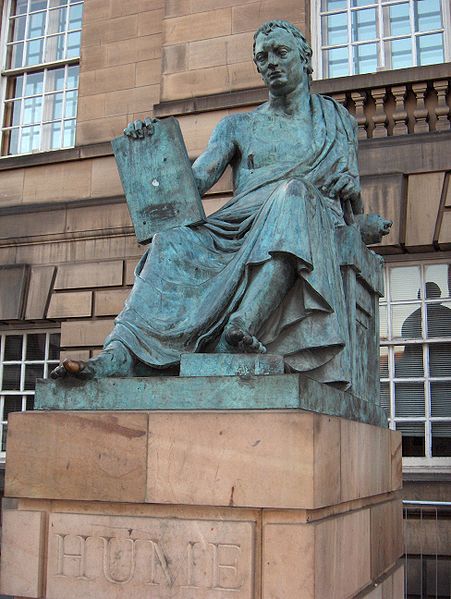 Like many other spiders, George once roomed at Englefiend Museum. She shared a space in the North North Wing, with a beguiling statue of David Hume and the ash-filled urn of The Elephant Man.

Shortly after she arrived, George got lonely and bored. Despite the presence of such celebrities, the museum was dank, dark and did not greet many guests. The statue of David Hume always seemed concerned, but nothing could withstand the reticence of the urn. Other spiders weaved their webs in nooks and crannies, hoping to catch the most stupid of flies — stupid spiders! George had bigger plans.

Working without rest, feeding from the urn, our ambitious spider weaved an ashen masterpiece. Beautiful, and visible only by moonlight, it spanned the doorway to her room. But everyone knows that a web is only as good as that which it catches. . . .

The next day, a busload of schoolgirls alighted at the museum’s entrance. Fortunately, after being shown round downstairs, the girls were given leave to wander as they pleased.

Wandering alone in the North Wing, pretty Edwina (who liked poetry and swan-spotting) was first to glimpse the statue of David Hume. She could not resist a closer look. No sooner had she crossed the room’s threshold than the web arrested her. Our spider was quick to silence the young girl and she was dragged away in despair. The statue looked on.

Dainty Katy-Louise (who liked boys and embroidery) was likewise captivated by the well-proportioned statue of David Hume. Lost without friends, she too wandered into the spider’s masterful snare. The statue looked on.

George rubbed her pedipalps with glee, for her plan was working. Just one more child, and she would have the complete cast for her existential play!

As George made marionettes of the girls, the solitary Martha (who had no interests as such) passed by the room. Inevitably, she took a fancy to the dashing statue of David Hume. But, noting the mounting concern on the statue’s countenance, she sensed a trap. She cast a nearby bucket of filthy water at the room’s bare and dusty floorboards. Thus the monstrous, thick web became visible to the light of day.

Martha destroyed the web with a broom and caught our busy spider with teacup and tearstained loveletter.

Walking calmly to a bathroom at the back of the house, she placed George in the washbasin. George pleaded:

— This play was to be my magnum opus!

But Martha was not versed in the patois of spiders. She opened the faucets fully and our spider was washed away.

She came upon the two girls next, strung up and in great distress. She called the teachers and the other girls to come and see, before she got to work to set them free.

Everyone paused over the mysteriously empty urn. Then they gathered for a closer look at the really rather remarkable statue of David Hume. The statue looks perturbed, even to this day.

GUY PURSEY lives and works in Reading of Royal Berkshire, where he writes through the night and dreams of escape.

See All Posts by Guy Pursey