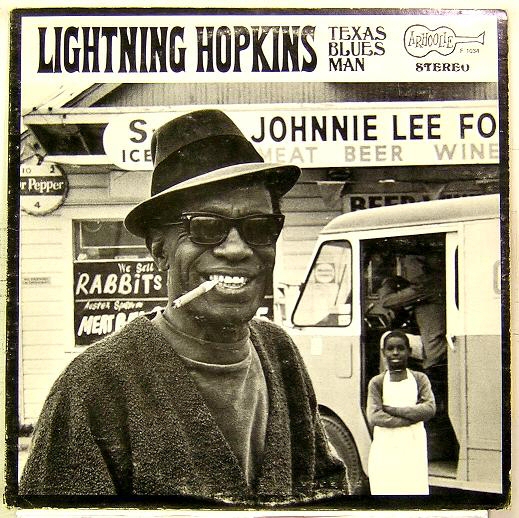 One of the most beloved of all bluesmen, SAM LIGHTNIN’ HOPKINS (1912-82) is a riddle wrapped inside ubiquity. Some basic facts are known: he came from Leon County, Texas, where Blind Lemon Jefferson and Texas Alexander were regional heroes. Despite little formal education, Hopkins knew music was far preferable to picking cotton — what he didn’t know was how to stay out of trouble. While details are lacking, evidence suggests Hopkins’ spent the 1930s in and out in prison. By the mid-1940s, Hopkins had settled in Houston’s Third Ward; here he was discovered by Lola Ann Cullum, a black talent scout with connections to Los Angeles-based Aladdin Records. From November 1946 through 1954, Hopkins recorded often: fast and slow electric guitar boogies of warmth, menace, sorrow and whimsy. Then the blues market faded. In 1959, a white admirer, Mack McCormick, rediscovered Hopkins, encouraging him to join the folk revival on acoustic guitar; a decade of prolific recording ensued. Despite inevitable repetitions, Hopkins could always surprise: “Happy Blues For John Glenn” (1962), for example, and “Hurricane Buelah” (1967, see below). On February 1, 1968, with two 13th Floor Elevators in the studio with him —Hopkins was especially inspired: “You walk in Mr. Dittas store/He stand there cleaning meat/He got a knife in his hand, boy/Ready to cut you some meat/Because he says I hear you were hungry/And I got something for you to eat.”

On his or her birthday, HiLobrow irregularly pays tribute to one of our high-, low-, no-, or hilobrow heroes. Also born this date: David Cronenberg.