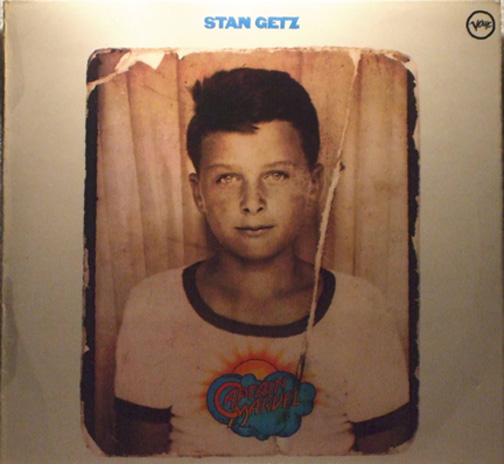 “There are lots of people who think STAN GETZ (1927-91) invented jazz,” observed Gilbert Sorrentino, “but academics don’t count.” The novelist’s tone is here sarcastic; that of the tenor saxophonist was everywhere a marvel of fluid sincerity. Getz grew up poor in the Bronx, took his first professional job in December, 1942 — and was busted for truancy soon after. Impressed, Jack Teagarden became Getz’s legal guardian, educating the teen in the blues and alcoholism. Joining Stan Kenton in 1944, Getz made $125 a week and the acquaintance of heroin. Already devoted to Lester Young’s visionary “cool,” mastery of be-bop made Getz complete: he could do anything, brilliantly — except, in 1954, hold-up a Seattle pharmacy. For that, he was arrested. A 1960 film of Getz and John Coltrane jamming Thelonious Monk proves everything. Jazz Samba, Getz’s 1962 collaboration with guitarist Charlie Byrd featuring “Desafinado,” was a hit; “Is Bossa Nova The New Twist?” Billboard wondered. Getz rode the craze well but wasn’t constrained by it: albums like Sweet Rain (1967) and Captain Marvel (1972) re-proving his progressive empathies. What Getz couldn’t master were his addictions, at least not until terminal liver cancer, diagnosed in 1988, forced the issue. Yet Getz’s final performances (duets with pianist Kenny Barron), recorded just three months before his death, are among his finest. What did it mean, Getz’s last redemption in art? To jazz critic Larry Kart, he was a “solitary, pensive, ultimately courageous figure.”

On his or her birthday, HiLobrow irregularly pays tribute to one of our high-, low-, no-, or hilobrow heroes. Also born this date: James Joyce.