Where are your babies?

Eighth in a series of posts. 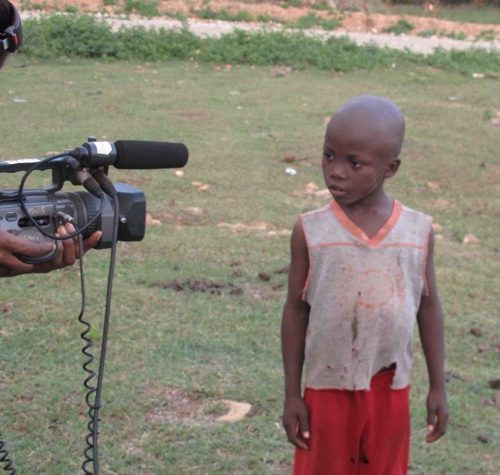 Clothespins bristle from cheeks, eyebrows, lips, dangle as earrings, his face quilled as if he’d tried to tackle a giant porcupine. Clothespins in clipped rows along neck and arms, creating fanning lizard fins. His stoic face is gripped not just by clothespins and pain but by humiliation. Each pin represents a game lost, and his spectators jibe and tease. He sits under a banana tree facing his opponent, placing his dominoes with a steady deliberation that doesn’t seem to be working.

His adversary holds a chair larger than himself over his head, an attempt to hang on to his winning streak. He slaps dominoes to the table with gusto, as if he can enhance the spotted tiles with his special victory juju. And maybe he can.

I watch this domino death duel from the road, waiting for a mototaxi that may never come. There’s not a drop of petrol to be found. The usual speculations waft about: when gas prices sink the fuel companies hoard it till the price rises again. Another whisper in the wind: that a Venezuelan or maybe Canadian fuel tanker is being held offshore. Who knows. No problem for the rich, they have private stashes, their lives won’t miss a beat. It’s the poor who are doomed to miss work, queue-up on the endless gas lines, or buy over-priced, watered-down junk gas that ruins engines.

People tell me not to take the motobikes. The drivers don’t have licenses and, perhaps just learned to drive yesterday, no one uses helmets, there are endless potholes, everyone speeds even when going nowhere. Motobike wrecks are high on the mortality list in Haiti. But I’m addicted to the ride. I never tire of cruising along, checking out the passing landscape… a small girl pulls with all her might on the tether of a stubborn cow, a woman promenades with a three-foot pile of candy-colored tupperware poised on her regal head, the sparks of a welding arc like a thousand hallelujahs shoot out of the site of a collapsed church-cum-mechanic shop. And the breeze: the only time I’m cool is whipping along on a motobike. 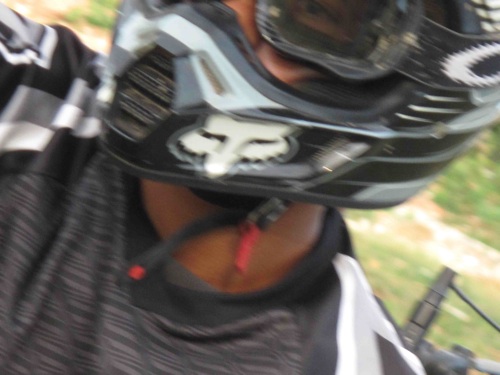 Finally one roars up, the driver smiling to show off the bling in his teeth. We head for the agronomist complex next to the airport, where I teach film out of an army tent. I ask him, Konton? Non. Pourqoui? Triste. Pourqoui? Pa gen trava. Pa gen petwòl. Not happy. No work. No gas. But he laughs as he says all this. He asks me: how many babies do you have? They always want to know where my babies are.

Too many babies, I say. No babies, I say. My babies are my 40 students. I have no babies and lots of babies. By now we are deep laughing, not that we know at what. Bubbling escalating titters that have me clinging to this stranger so as not to flop off the bike from too much joy.

Last night I captured a few minutes of the molasses IV-drip that passes for internet in Haiti. The men that pass for cops in Haiti were hijacking the bandwidth by sitting in the parking lot downloading action flicks, but even on a good day it’s slow. The most you can do is skim your inbox and hope to click and glimpse a few of the important messages before the connection dies. Among the backlog of emails there was one from the film school’s office in NYC asking me to get the students’ jeans and shirt sizes. Someone in NYC wants to donate some nice clothes. I hesitate. Most foreigners who promise things to Haitians never deliver.

The girls especially are excited. A large piece of paper is found, lines drawn, a chart made with each student’s name, and columns. The girls are checking each other’s waistbands, looking for tags, grabbing the guys by their waistbands and peering down the backs of their jeans. No one seems to know what size they are. It’s a big production, full of shenanigans and teasing and giggles and flirting. This could eat up time and derail today’s lessons, but I do love to see them so happy. 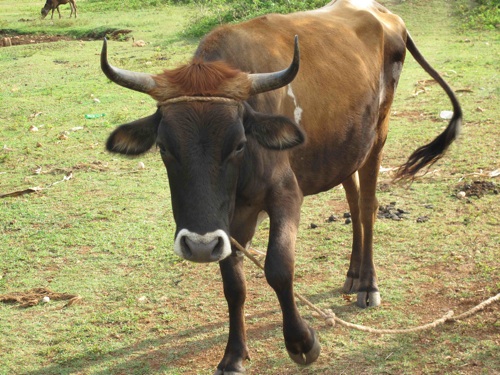 The only way to distract them from a pipe dream is to lure them back with something more interesting. I pop an action flick into the player. I begin skimming and freezing the tape to show all the possible angles when shooting an action sequence. I ask them to speculate on where the camera was for each shot. How certain shots cut together increase tension. Today is a special day. Charlie Libin, a cameraman, is visiting from the US and is going to guest-teach a class today. My friend Christophe has offered to race his ATV on a local motocross track in his awesome black-rubber racing outfit. The track has rolling hills, decent jumps, the trails littered with cows, horses and bulls.

We check and load equipment, head to the location. Everyone is pumped. Action! Four-wheelers! Loud engines! Speed! Racing! Cool superhero outfit! A real Hollywood pro teacher! Charlie rigs a flip camera onto Christophe’s helmet, shows how to bury a camera under a jump so that ant-eye-view shots of the undercarriage flying overhead can be gotten safely. He breaks the students up into shooting teams and positions them. We film Christophe as he unloads his fat-tire, four-wheel beast, pulls on his sleek clingy protective suit, transforming himself into cool alien racing dude. Locals gather to watch; this is a high-octane event in a string of otherwise languid days. Kids stare in awe at my students and their sleek camera gear. A guy shows up with his pitbull, commanding it to perform tricks it refuses to do. The cows bellow, horses whinny. Young boys bask in the aura of machismo and begin climbing trees, doing cartwheels, posturing. The more the men strut the wilder the boys get.

I’m yammering away, dragging students around to point out good B-roll shots, keeping the interview with Christophe going. I’m the annoying whip-master with the checklist. Get that shot, check that focus, wipe that lens, hold that shot. 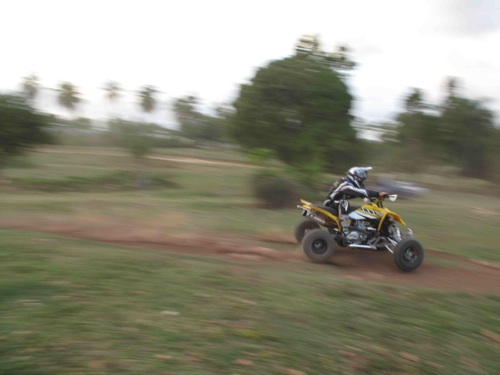 The bull interests me. There is something testosteronic about the gear and the gunning of the engine that might intercut well with the bull and the he way he hoofs the dirt, hangs and swings his head, mirroring Christophe as he kicks his motor into a roar, lowers his head to put on his black helmet, snaps the visor down. A bit clichéd, but cut well, it could be funny. I see the bull shitting and tell Marco to shoot the shit. Marco gives me his usual: “I love you teacher, but you’re nuts” look, rolls his eyes and films the bull’s shit. You never know when you want to take the comedic to slapstick and put a bit of literal bullshit in the tale. You can’t predict what you’ll need in the editing room.

Christophe begins gunning around the track, racing another ATV. The students shoot him going and coming, and begin anticipating shots as he rockets close and then spins off. They’re learning how to swing, catch the rhythms of action shooting, run with gear, anticipate where to put the camera, hold the shot on the dust cloud not only as it kicks up but as it fades, shoot reaction shots from crowd. It’s thrilling to watch them learn so fast. Charlie and I tear around after them, trying to keep everyone safe.

One of the first classes I teach is “The Camera is Your Baby.” I get the students to cradle the camera, swaddle it in a white cloth to keep dust out, deflect the heat, keep the dust out of its eye. Treasure your camera, protect it. Earlier, Charlie and I give the students a “safety first” lecture, explain how the ATV could hit a rock, bounce, veer explosively, and so to always have a “spotter” and shoot from behind a tree or other barrier, take no chances.

In the excitement to grab the best shots they’ve stopped listening to me. Now I run around and yank the teams back behind trees. But they are little action magnets on snapping rubber bands. As soon as I turn my back, they creep out to get a better angle, usually directly in the path of the gunning beast.

The little boys are careening around on their bicycles, trying to act tough in this big-boy arena. Tiny kids watching big kids, picking up their rhythms. The bull bellows and adds a baritone soundtrack, energy ricochets and builds. A petri dish of machismo. 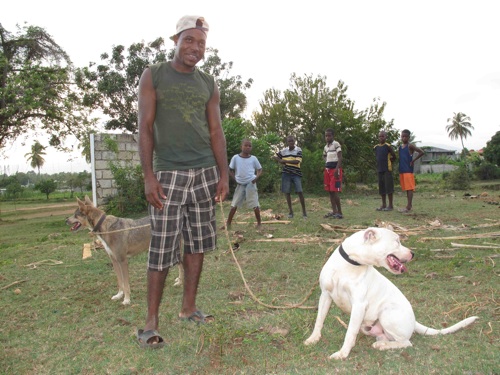 The drivers pull their ATVs in for a pit stop to rest their pecs and check their engines. I stand under the shade of a tree with a few of the students. A woman scurries up. Receding hair, skull head, bug eyes. Fou, my students whisper. Crazy. Fou fou. She pulls up her blue T-shirt. She wants to talk about her breasts. She wants us to film her breasts, or her sickness, or just hear her story. Her breasts are sad. They hang, empty, almost reaching what look like birthing scars that jag down her tummy and disappear into her jeans. These are not a perky pair with no history, ready to conquer the world, these are tits with history, tits that have fed too many. Where are your babies, I want to ask her. But I don’t. She points to my camera. I pretend to photograph her.

Back at the tent, I see that the size chart has been filled out. Every size is the same: medium medium medium. I stare at the chart. What does this mean? I have no idea. No one wanted to admit to being a large or a small? Everyone wants to be medium? Not used to clothes sizes? Was it all a game? Did they suspect, as I do, the promised clothes will never arrive, but played the game anyway, for the heck of it?

I try to find out, but the girls just shrug mysteriously. Best they could do.

Haitians are often baffling, with their mercurial, meandering ways. As I drive them like a drill sergeant with my hyper work-ethic I imagine I baffle them too. I don’t pretend to get their world, and they don’t know mine. But we’re changing each other. Changing into what we don’t know. 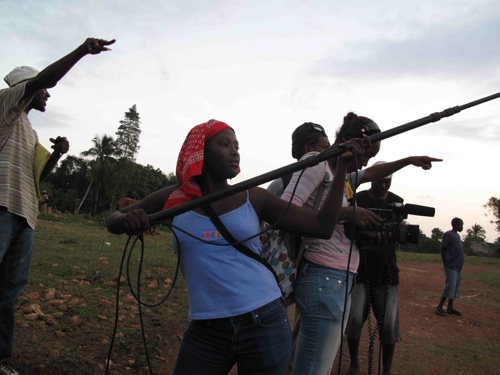