Seventh in a series of posts. 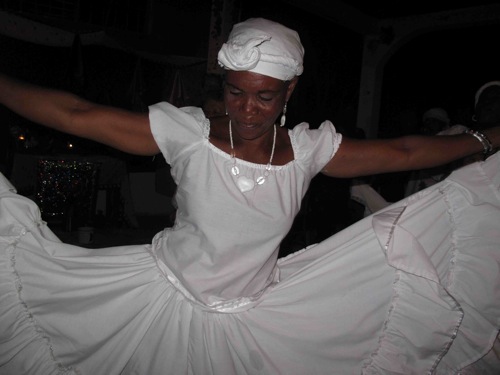 A spirit comes, mounts and rides. If it is the scandalous Baron Samedi who mounts you, and you hump a tree, it’s just the Baron doing his thing. If your friends see you humping a tree, they may smile but they won’t mention it in the morning. They know it is the ornery Baron using your lips and hips to speak his lascivious spirit.

A woman draws in the dirt with a stick. Her movement is fluid, following a path traced a thousand times before and each time anew. She pours a handful of cornstarch into her palm. A fine stream of white flows from her fingertips as sure as the sand in an hourglass trickles from one realm to the next. A filament of fine white curlicue emerges. A snowflake veve that will take all night to melt into the ground. 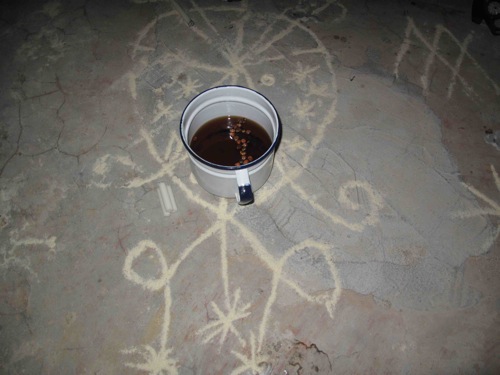 Veves drawn, candles lit, red cloth festooned, sequined bottles arranged, food lain, the slow patter of drumming… like an anxious romantic preparing a bedroom for seduction. Which it is, a seductive call to the Loa, the spirits… who will come tonight?

I’m rigid in a straight-backed chair. My escort to this ceremony high on a mountaintop got drunk, possessed, pulled a machete, was reprimanded for bringing a blan, a white outsider, to a private ceremony. He’s banished. I’m told that I have to leave, but when I try to, they bring me back to the chair. At least that’s as much as I can sleuth from a broken English/Creole exchange with a young boy. Someone pours liquid sweetness down my throat, another gives me a handful of seeds. In the end, I stay and dance all night, with kids and Mambos and a man who arrives in a red-sequined jacket. But that’s another story. That night, ten years ago, was my introduction to the Vodouisants. 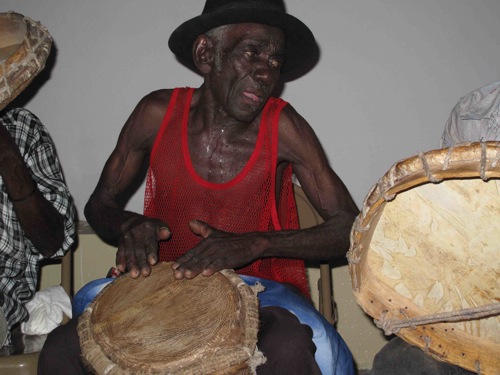 In the last two years I’ve attended a few more Vodou masses. One seemed set up for tourists, with the Houngan, the priest, most interested in collecting money. Some were casual spontaneous possessions during an ocean rhum and drumming night, others formal daylight events that one man told me, jokingly, “no Loa would be caught dead at.”

Like any other kid raised on Hollywood movies, Vodou to me was zombies and pins stuck in dolls. Victor Halperin’s White Zombie, Val Lewton’s I Walked with a Zombie, Wes Craven’s The Serpent and the Rainbow depicting Vodou as deadly evil, films that inspired legions of zombies and pin-cushion dolls to march through everything from The Three Stooges to Michael Jackson’s Thriller.

It’s as if your sole understanding of Christianity came from the sex-crazed nuns in Ken Russell’s The Devils, or Robert Downey Sr.’s Greaser’s Palace, where Jesus wears a zoot suit and God keeps his mother in a cage, or the cold, severe Christ in Pasolini’s The Gospel According to St. Matthew. 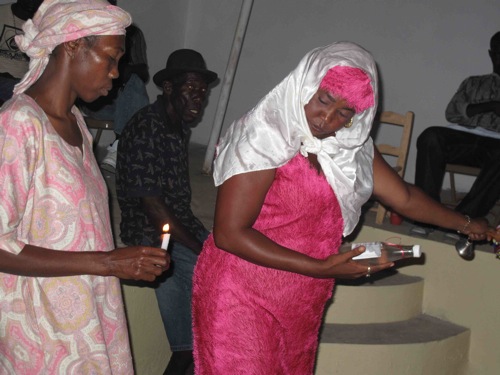 My film student Zaka and I have been invited to a post-earthquake ceremony. Zaka meticulously films every detail. The altar is prepared with a pig’s head, bowls of seeds, bottles, veve at its base. Elderly men with distinguished faces and remarkable hands that patter on drums, lips to flutes. The Mambos twirl and show off their divine gowns; sway, dance, tremble, roll eyes, ready to be mounted by a Mystery. Vodou is an ecstatic religion, its practitioners eager to serve, speak and act for a spirit.

Papa Legba, always the first to come, is called. I don’t see him arrive. A white Mambo calls for the spirit of love and beauty. The atmosphere is pitched. She seems to get possessed, but in a way I’ve never seen before. She looks severe and angry, wields a knife, swoons to the ground, is covered with a sheet. When she rises again she holds a dove. 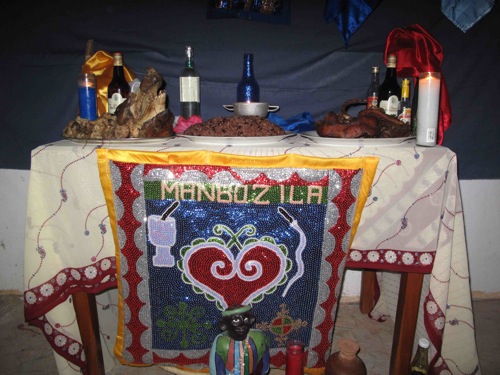 A Mambo invites me to dance, and for some reason in my drunken state I pull her into a western swing. She laughs and allows me to spin her, and soon another woman wants to try. My eyes search for Zaka, for some clue as to whether or not teaching the priestesses how to cowboy dance is rude, but I can’t find him. Later a priestess asks me if I felt the spirit, and I tell her I felt nothing other than that I love to dance. It is fruitless to resist the compelling, hip-grabbing rhythms of the drumming.

Then a dog arrives. Dogs in Haiti are furtive, stealthy scavengers that would tend to lurk near the pig’s head. This one has a different cast in his keen eyes, and seems to take a grave interest in the dancing. Is it a post-goudou goudou spirit? Haitians will casually mention that an aunt that was turned into a cow. Or a child turned into a baby goat. A kid that is now a different sort of kid. By the time I point out the dog to someone, it is gone. My students claim to not believe in the aunt cows and child goats and zombies. And yet they seem secretly terrified of them. The real and unreal, belief and unbelief; ignore either at your peril. 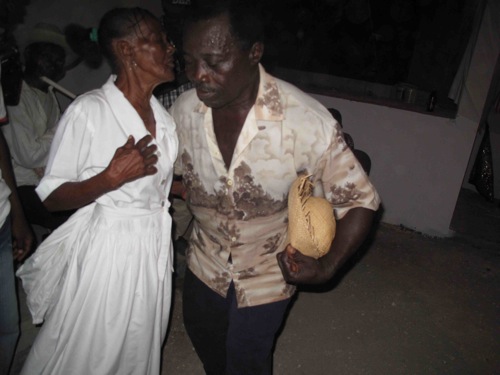 The day dawns on Sunday, and I hear singing in the distance, long notes held breathlessly that seem pitched to pull one to water. I drift down to the beach and see a semi-circle of worshippers facing the sea, a young woman ready for baptism. There are two long sticks with forked ends like snake tongues. I imagine these poles are to pluck someone out of the water if necessary. The ocean is gentle, the priest dips the girl back into the sea foam and she rises in stunned bliss.

I watch a dog annoy everyone with his stick. He can’t find anyone who will play. They are reading bibles and singing hymns. No time for this spirited creature. So he tosses the stick into the air himself and catches it. He seems happy to have himself to play with. 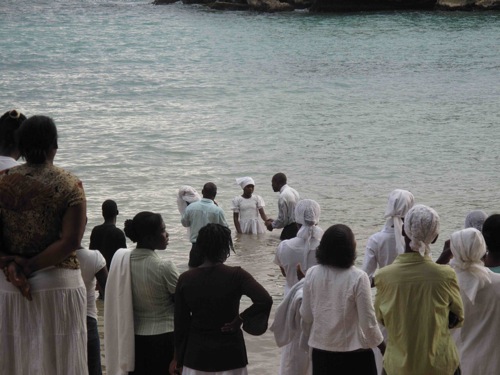 For the mountaintop tale mentioned in this story, click here.