Seems like everything fun to hunt is endangered or just plain gone these days. Rhinos, elephants, passenger pigeons . . . Tigers might have only about 12 years left, according to some recent reports. We’re no longer big game hunters, we’re planetary administrators, and not very good ones at that.

But you still might be able to bag some trophies if you move your trophy room from the den to the bathroom. Actually the bathtub. A new kind of hunt is on, one sanctioned, if not actively encouraged, by the administration of both the planet and your conscience. Just switch your target from lions . . . to lionfish! 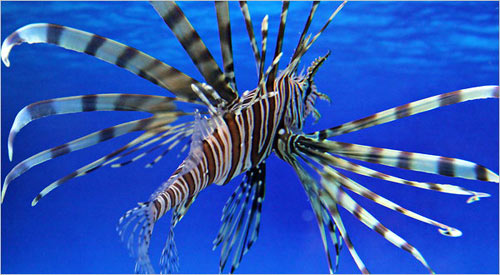 An aggressive, invasive species, the lionfish is a favorite of online image galleries but a plague on the coastal waters of the Caribbean and southern United States, especially the sensitive ecosystems of the Florida Keys. It multiplies at an amazing rate, eats all the other fish, and has no known predators. (And this is where you come in: no known predators, except for man . . .)

Think a lionfish won’t test your mettle, won’t have enough wits to match? Think it’s an unworthy opponent in your Hobbesian game? Think Papa is laughing as he watches through his scope in the sky, as you essay for aquarium escapees? Think again. Lionfish are sneaky and poisonous; they flit from their niches and then hide to watch your futile attempts. Despite their population and extravagant appearance, only 109 were speared in this year’s Lionfish Derby.

And, they’re good eatin’. So what are you waiting for? Happy hunting!