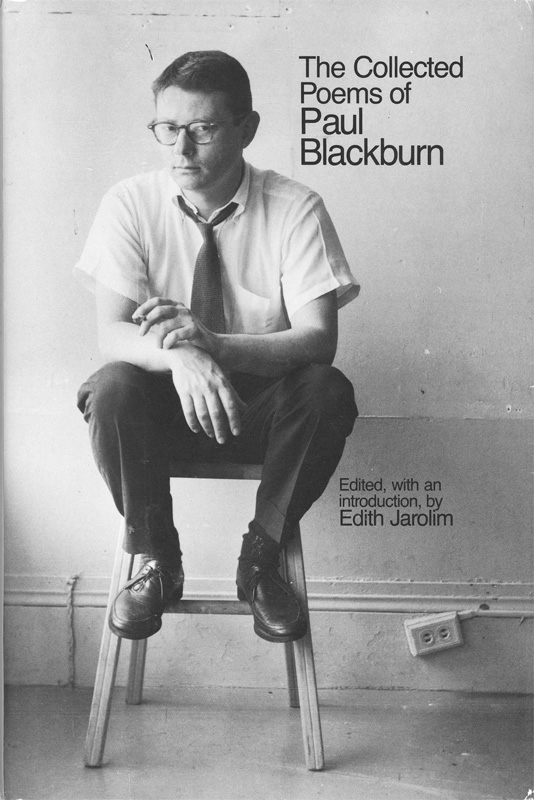 “Somehow he was ignored by that critical regiment that pretends an interest in contemporary poetry, and that is always with us, like gonorrhea,” wrote Gilbert Sorrentino of his friend, poet and translator PAUL BLACKBURN (1926-71). Raised first in Vermont by abusive grandparents, as a teenager Blackburn joined his mother, Frances Frost (herself a writer) in Greenwich Village. In time, Blackburn became “The city poet par excellence,” according to Robert Creeley: “that absolutely crucial center; that ear that could hear us all.” Brooklyn-Manhattan Transit: A Bouquet for Flatbush (1960), among other works, proved it. Earlier, on the counsel of Ezra Pound, Blackburn began a lifelong study of the French troubadours, from whom he learned technical virtuosity (meter and voice) rarely equaled by his peers: “Poem for the Postponed Triple-Orbit Atlas Booster Mercury Manned-Capsule Friendship 7 Spaceshot” and “A Long Range Interview With Satchel Paige, the Man of the Age” show off his range but don’t define it. One of his last poems from the Summer of 1971:

What a gas, maybe
Louie Armstrong & I
die, back to back,
cheek to cheek, maybe the same year, “O,
I CAN’T GIVE YOU
ANYTHING BUT LOVE,
Bay-aybee”
1926, Okeh a label then
black with gold print, was
one of my folks’ favorite tunes, that year
that I was born. It is all still true
& Louie’s gone down &
I, o momma, goin down that same road.
Damn fast.

On his or her birthday, HiLobrow irregularly pays tribute to one of our high-, low-, no-, or hilobrow heroes. Also born this date: Stephen Merchant.