Holes in the Jar

Clouds –
a chance to dodge
moonviewing. 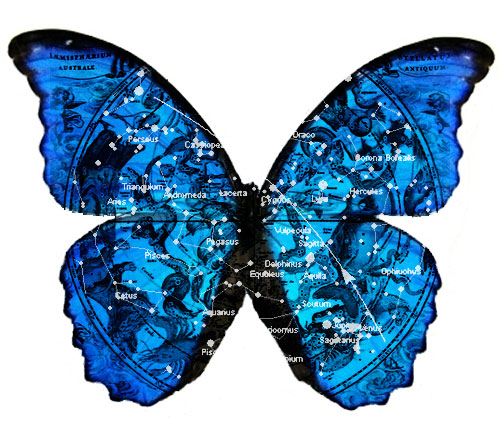 Have you ever struggled with a star map? One of those laminated, bowl-shaped contraptions with a grommet in the middle, that shows you all the stars, and their connecting storylines, in perfectly clear, white-on-blue detail? Perfectly clear, that is, until you hold it up to the sky and attempt to match anything up. Well, sure, there’s the Big Dipper, and Cassiopeia, and Orion’s — belt, but what about all the rest of it? Either light pollution and clouds obscure the light, or there are too many holes in the punchcard; you can’t parse the patterns, despite your program.

There’s an app for that! Several, actually, that allow you to identify residents of the sky with various levels of visibility: planets, stars, satellites . . .

But when it’s augmented, why stop with reality? iButterfly offers pixilated butterflies, to catch and collect.

Of course it’s about the sell, as coupons reward your collection. But what if each butterfly was connected instead to, say, a haiku? Or an aphorism, or a sound, or even, a real butterfly, connecting the flowers over latitudes and generations . . . we could use apps such as these to draw new constellations; to map the invisible stars of another sky.