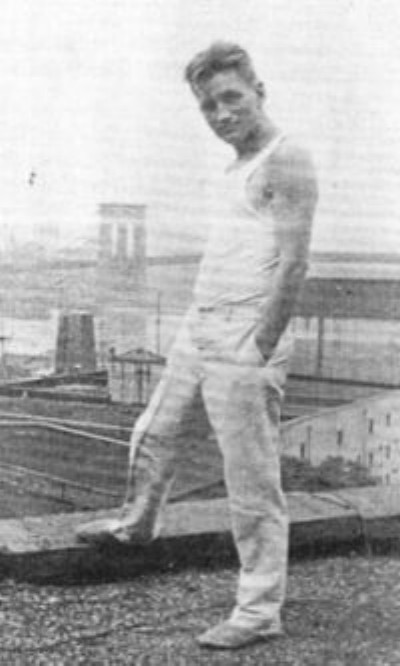 His poems were “pages of bedlamite shrieks of a soul like Atlantis, and then there are those green sea cries towering out of the foam” wrote Edward Dalhberg of his friend, self-doomed fellow Clevelander HART CRANE (1899-1932). But Cleveland — where, in 1912, his candy-manufacturer father invented Life Savers — couldn’t hold the prodigal son, who fled eastward.
By the spring of 1924, Crane takes a room in Brooklyn, at 110 Columbia Heights, just south of the Brooklyn Bridge. Here he loved a Danish seaman, Emil Opfer; here, along the sexually frothing Brooklyn waterfront, he — like Walt Whitman before him — would solicit many others.
A block away lived poet and critic Allen Tate, who introduced Crane’s first book, the epochal White Buildings (1925), which playwright Eugene O’Neill also endorsed. The years following, during which Crane continued a hugely ambitious mytho-historical project he called “The Bridge,” were so fraught and frenetic, they’re best adduced in the letters which comprise an essential part of Crane’s canon. In 1930 recently widowed Black Sun Press publisher Caresse Crosby offered unto the world the stunning first edition of The Bridge, which included three photographs by a then-unknown Walker Evans. The world was largely dismissive, refusing the Melvillean lucidity of Crane’s terrifying disunities. Again, Dahlberg: “But Crane craved infinite Bacchanalian seizures, or the bliss of the shroud and the tomb, and so aboard the Orizaba,
on his way back to New York, he leaped from the rail of the deck into the sharkish Carib sea.”