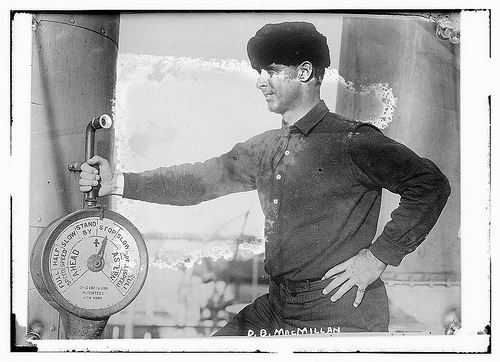 The windows of the zeppelin’s bridge were opaque with frost and rime. The captain of the airship stood half out of the cabin door on the walkway, shouting instructions to the pilot. Sudden gusts of arctic wind made the slowly descending airship sway and their howl fought with the roar and whine of the ship’s engines.

Professor Väisälä sat on a bench in the back of the bridge, trying to stay out of the way.

The sun winked out, leaving the widows milky white instead of painfully bright panes of golden light. There were shouts, the air anchors were lowered and the ship lurched when they caught.

“Arctic circle plus ten, approximately 20 kilometers out of the former city of Rovaniemi”, the navigator intoned.” Väisälä stepped out to the catwalk outside the bridge to survey the shipwreck, which spanned hundreds of meters of the shadowy arctic landscape.

The wreck of the previous expedition had been spotted by the steam plume of their zeppelin’s Fermi-pile, which was still melting through the ice. Parts of the airship FZ Aino still hung on the kilometer high ice wall that loomed over Väisälä’s ship. The captain scratched his beard covered with hoar. “In the night, with the snowstorm, it must have looked like a cloud bank.”

Professor Väisälä let out a wavering sigh. “But they have proved the theories and confirmed the terrible conclusions. The holocene is over, and the sixth ice age is upon us. God save us all.”

Janos Honkonen’s story was one of two finalists in our second micro-fiction contest. The contest began on March 22, 2010 and ended on March 31. Theme: APOCALYPSE.