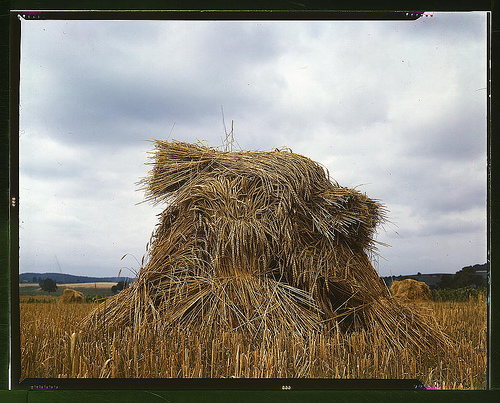 Thelma gazed across flat Dakota emptiness. “So flat,” Father joked, “that on a clear day, you can see the back of your own head!” The wheat field was ploughed, but not yet planted. Thelma saw something several yards off, large, metallic, glinting in the sun. Walking toward it, she wondered if it was part of Father’s thresher, broken off during harvest. Nearing the thing, Thelma saw that it was larger than she had first thought, mostly buried beneath the ground. This was no thresher.

Presently, Thelma was close enough to see the exposed metal that had first caught her eye projected off the object’s cylindrical body, which was sleek, shark-like. The part sticking up, the fin, was as tall as Thelma, the cylinder six feet across and of undetermined length, being partially buried in the field. Thelma observed a seam running around the diameter of the cylinder. As she watched, this seam began to widen, the tail-end of the shark-thing extending out of the ground. Petrified, she realized this widening was the object opening itself. Whatever was inside was about to reveal itself. Thelma fled toward the house, seeing only black ground and blue sky blurred by wind and tears. Then a blinding white flash dazzled her, and there was nothing else.

At home, Mother stood at the kitchen window. “Did I just see lightning? And not a cloud in the sky! Lucille,” she called to her youngest daughter, “run and fetch your sister. I think a storm is coming.”

Angela Bjork’s story was one of two finalists in our second micro-fiction contest. The contest began on March 22, 2010 and ended on March 31. Theme: APOCALYPSE.