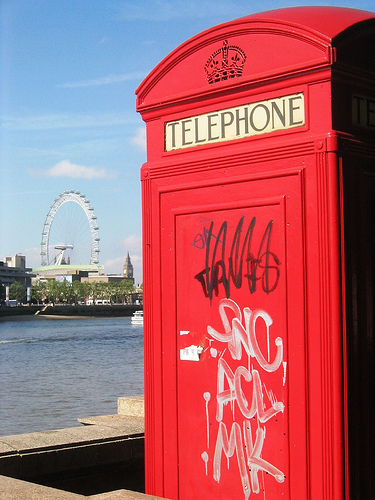 Most Anglophiles know that Cockneys have historically enjoyed walking up a flight of apples and pears (stairs), strolling down the frog and toad (road) and chatting on the dog and bone (phone). But nobody seems to have a didgeridoo (clue) about how Cockney rhyming slang first emerged. Most theories and stories propose that it evolved at some point in the 19th century and that, like many cants and vernaculars, it acted as a device for concealment; criminals discussing business without raising any eyebrows down at the rub-a-dub-dub (pub); market traders colluding on prices under a customer’s I suppose (nose); prisoners talking about contraband in front of screws without getting in tom tit (shit).

Rhyming slang has been part of British English ever since, propagated by each new generation of Londoners and Elsewherers who fall for the attractive mix of humour and exclusion that it brings to their speech. And with each round of propagation, old rhymes that no longer have cultural resonance disappear from the lexicon and new rhymes that capture the mood of the moment appear in their place. If you find yourself a little short of money in Whitechapel and ask a friendly young rhymester if you can borrow a Lady (Godiva = fiver), you’ll probably get a baffled look. But if you ask him whether he can spare you an Ayrton (Senna = tenner) instead, you’ll at least be understood, even though the response to your cheeky request might be a kick up the Gary (Glitter = shitter).

In my limited experience of discussing rhyming slang with Americans, it has been regarded, with a mixture of confusion and fascination, as yet another example of quaint British pointlessness, to be filed alongside real ale, hot tea and the National Health Service. But I would like this to change. More than that, I would like Americans to start including a quasi-Cockney comedic cryptolect in their everyday conversations. I believe American English would become a richer brew for it. And this is the nub of the inaugural Magister Ludi challenge: invent a piece of rhyming slang that is compelling enough to warrant its adoption into everyday American usage.

Before I officially launch the challenge, perhaps I can tickle your creative neurons into compliance by presenting some of my favorite examples of rhyming slang, ancient and modern.

Jacob’s Crackers = knackers (Jacob’s is the leading brand of British cracker; “knackers” is slang for “testicles”)

Frank Boff = off (Frank Bough used to be a TV presenter in the UK; “doing the off” means “leaving”)

Barry McGuigan = big ‘un (Barry McGuigan was a British boxer; “giving it the big ‘un” is slang for “throwing your weight around”)

Bobby Moore = score (Bobby Moore was the captain of the English team that won the World Cup in 1966; “score” is slang for “situation”)

So, on to the challenge:

1) Come up with a piece of new rhyming slang that you could imagine Americans using in conversation.

3) Provide at least one sentence that illustrates its usage.

4) If you’re feeling extroverted, upload an audio recording of you demonstrating your slang exemplar (using Audioboo or similar) and supply a link to it.

5) Explain why you think your creation should win the the challenge.

The HiLobrow reader who posts the winning entry (judged as such by virtue of its ingenuity, semantic multi-layering and/or all-round chuckleworthiness), will win a HiLobrow t-shirt. The challenge will close at 9pm EST on Sunday 21 March and the winner will be announced and publicly lauded shortly thereafter.