In the screen classic beloved by philosophy undergraduates everywhere, Socrates (Dustin Hoffman) is the target of an attempted seduction by Diotima (Mrs. Robinson). Slowly she slides the stocking up her toned, elegant 35-yr-old legs: half way up, then half again, then half again . . . Socrates realizes that he must arrest the impossible rise of that stocking. But how? 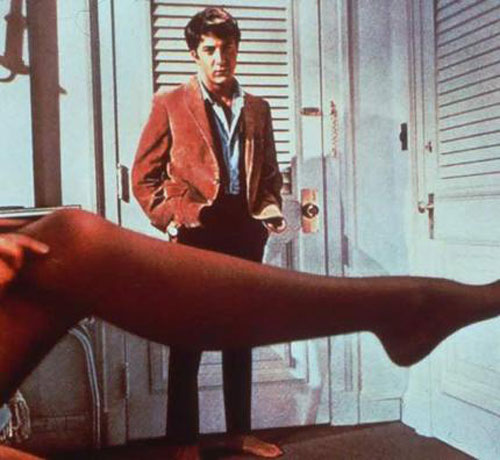 Then, in his Eureka! moment, he sees through the transparent conflation! Making the first of the many smooth moves for which he is so justly famous, Socrates sees that the condition of the question itself, the mode of inquiry, holds the key to the solution. The continuous illusion of film belies its discrete construction of 24 frames per second. With this, Socrates realizes that no halfway measures will do, and successfully and succinctly surmounts the paradox.

Thus begins Socrates’ brilliant career of corrupting the youth of Athens, documented by his disciples in such illuminating Dialogues as Trixie, Rain Man, and I <3 Huckabees.