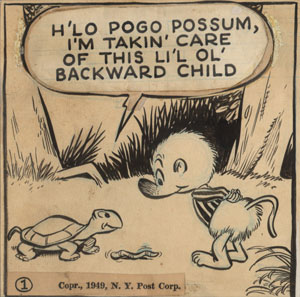 “My nose is blown, doc,” mopes a bandaged bloodhound cop as he sags against a panel border. In “No Nose is Good Nose,” Dr. Howland Owl laughs at the patient, violating his “hippocritical oaf.” Set in Okefenokee Swamp, Pogo (1948-75) features a wealth of sarcastic, nonsensical critters: an antidote to Disney. WALT KELLY (1913-73) did time in The Mouse Factory before creating Pogo. “What hath got rot?” says Kelly, speaking through Grizzle Bear. Via Li’l Mouse, he says of his artistic forerunner Krazy Kat: “It was an intellectual thing… one used to chuck a brick at the other.” As a child, I mimicked Pogo: “We have met the enemy and he is us!” but only reading the strip as an adult did I understand Kelly was spoofing everything from pride (“Somebody is offered you a feature part in a lamb stew?”) to politics (“The ecomedy of my country is already undermound,” says Castro the bearded goat.) With its satirical skewers, fluidity of line and fractured wordplay, Pogo is a comic masterpiece. While “skeptnics” argue over the ice cream moon race, Albert Alligator overeats and complains: “A free country should have protected us from making pigs of ourselves.” The Plotters Thicken.

On his or her birthday, HiLobrow irregularly pays tribute to one of our high-, low-, no-, or hilobrow heroes. Also born this date: | Martin Amis |