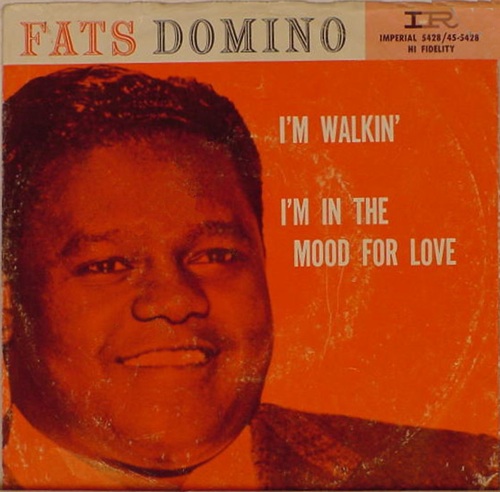 Seemingly the most amiable of early rock and roll stars, FATS DOMINO (born 1928) has depths his ebullience doesn’t suggest. He came out of New Orleans in 1949 when “Fat Man” made the charts. For fifteen years following, the portly flat-topped Domino made hits: sometimes pop, sometimes R&B, sometimes both. Many take consistency granted but listen to all of Domino’s Imperial sides (most recorded in collaboration with arranger Dave Bartholomew) through 1963 and admiration turns to awe, even bewilderment: why wasn’t “Boll Weevil” #1? “Howdy Pardner” wasn’t a single?! Only Jerry Lee Lewis — seven years Domino’s junior — approaches Domino’s inspiration over this time and his career was a mess until he came back to Country. Domino, by comparison, went pop in ’63 — signing to ABC Records, then home of Ray Charles — and failed. Subsequent efforts to recapture Domino’s studio genius were few and futile. It didn’t matter. He was a legend and highly paid live performer, especially in Las Vegas, where Dean Martin, Liberace, and later Elvis were his friends. No, money wasn’t the question, at least not Domino’s earnings. His losses were another matter. In May 1974, Ebony told the story of the man who lost $2 million in casinos — and survived. “Instead of gambling, Fats says he now spends most of his spare hours between shows in his hotel suite reading the Bible and praying in order to cope.”

On his or her birthday, HiLobrow irregularly pays tribute to one of our high-, low-, no-, or hilobrow heroes. Also born this date: Karen Berger.