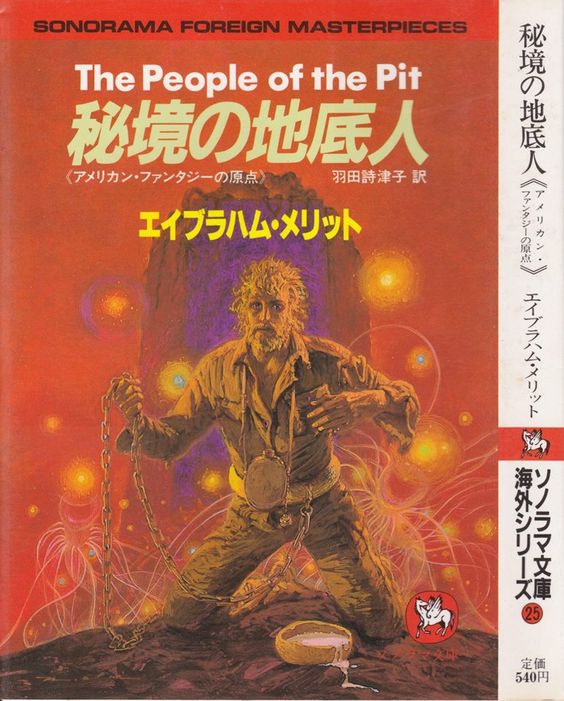 “I slept. When I awoke I found beside the pillar more of the white liquid. I scrutinized the chain that held me to the altar. I began to rub two of the links together. I did this for hours. When the red began to thicken there was a ridge worn in the links. Hope rushed up within me. There was, then, a chance to escape.

“With the thickening, the lights came again. All through that night the whispering chant sounded, and the globes rose and fell. The chant seized me. It pulsed through me until every nerve and muscle quivered to it. My lips began to quiver. They strove like a man trying to cry out in a nightmare. And at last they too were whispering the chant of the people of the pit. My body bowed in unison with the lights — I was, in movement and sound, one with the nameless things while my soul sank back sick with horror and powerlessness. While I whispered I — saw Them!”

“Saw the lights?” I asked stupidly.

“Saw the Things under the lights,” he answered. “Great transparent snail-like bodies — dozens of waving tentacles stretching from them — round gaping mouths under the luminous seeing globes. They were like the ghosts of inconceivably monstrous slugs! I could see through them. And as I stared, still bowing and whispering, the dawn came and they streamed to and through the entrance. They did not crawl or walk — they floated! They floated and were — gone!

“I did not sleep. I worked all that day at my chain. By the thickening of the red I had worn it a sixth through. And all that night I whispered and bowed with the pit people, joining in their chant to the Thing that brooded above me!

“Twice again the red thickened and the chant held me — then on the morning of the fifth day I broke through the worn links of the chain. I was free! I drank from the bowl of white liquid and poured what was left in my flask. I ran to the Stairway. I rushed up and past that unseen Horror behind the altar ledge and was out upon the Bridge. I raced across the span and up the Stairway.

“Can you think what it is to climb straight up the verge of a cleft-world — with hell behind you? Hell was behind me and terror rode me. The city had long been lost in the blue haze before I knew that I could climb no more. My heart beat upon my ears like a sledge. I fell before one of the little caves, feeling that here at last was sanctuary. I crept far back within it and waited for the haze to thicken. Almost at once it did so. From far below me came a vast and angry murmur. At the mouth of the rift I saw a light pulse up through the blue; die down and as it dimmed I saw myriads of the globes that are the eyes of the pit people swing downward into the abyss. Again and again the light pulsed and the globes fell. They were hunting me. The whispering grew louder, more insistent.

“There grew in me the dreadful desire to join in the whispering as I had done in the Temple. I bit my lips through and through to still them. All that night the beam shot up through the abyss, the globes swung and the whispering sounded — and now I knew the purpose of the caves and of the sculptured figures that still had power to guard them. But what were the people who had carved them? Why had they built their city around the verge and why had they set that Stairway in the pit? What had they been to those Things that dwelt at the bottom and what use had the Things been to them that they should live beside their dwelling place? That there had been some purpose was certain. No work so prodigious as the Stairway would have been undertaken otherwise. But what was the purpose? And why was it that those who had dwelt about the abyss had passed away ages gone, and the dwellers in the abyss still lived? I could find no answer — nor can I find any now. I have not the shred of a theory.